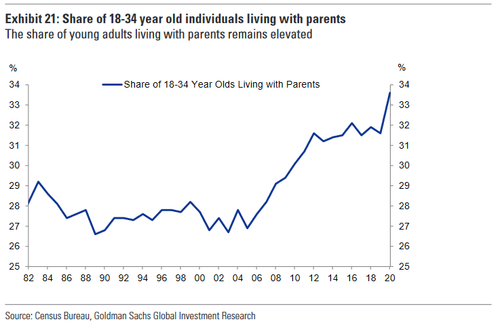 The number of adults aged 18-34 living at home with their parents continues to accelerate to levels not seen in decades, according to Goldman Sachs, citing US Census Bureau data which found that just over 33% have returned to the nest.

And while real estate in major markets is booming, the percentage of young adults in the ‘boomerang generation’ – who leave the nest only to return years later – has taken a dive, as unemployment and punishing (self-inflicted) student debt has forced many younger Americans out of the housing market. 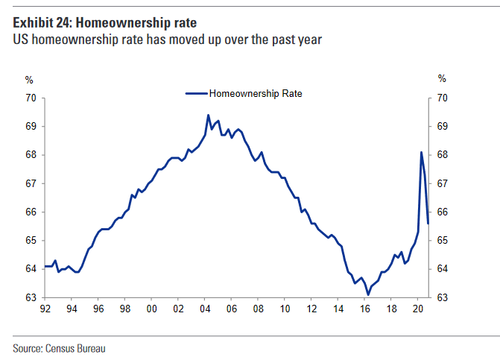 Last July, Pew Research reported that a majority of 18-29 year-olds, 52%, were living in their parents’ home – and spans young adults across the board; men, women, all races and ethnic groups, and in every geographical region, according to the study. Note that the percentage Pew reported is undoubtedly higher due to the lower cutoff in age for the range (29 vs. 34).

“In a very short space of time, we are now at levels last seen during the Great Depression,” said Pew senior researcher, Richard Fry.

That said, even before the pandemic, young adults were increasingly dependent upon their parents for financial support. According to Pew, around 60% of children between the ages of 18-29 received at least some financial help in the past year, primarily to cover expenses such as tuition, rent, groceries or bills.