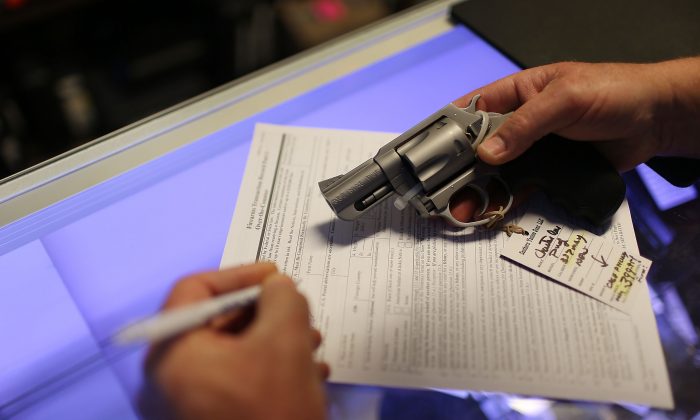 According to the National Shooting Sports Foundation (NSSF), as many as 8.5 million people bought their first gun in 2020. Furthermore, FBI data shows that the National Instant Criminal Background Check System (NICS) processed more than 4,317,000 background check requests for gun purchases in January of this year, the highest number for a single month since November 1998.

In February, NICS processed over 3,442,000 background checks nationwide, among which seven states had more than 100,000 requests. The total for January and February 2021 is close to the number of background checks completed for the entire year 2000.

In 2020, NICS processed nearly 40 million background checks for gun purchases, an increase of approximately 40 percent compared to 2019, reaching an all-time annual high. The U.S. Concealed Carry Association (UCCA) noted that the Black Lives Matter (BLM) riots and the CCP (Chinese Communist Party) virus pandemic in 2020 prompted a large number of Americans to buy guns to protect themselves and their loved ones.

Since 1998, NICS has processed more than 300 million background checks on gun purchases, and only about 1.5 million have been rejected. Therefore, this database is considered a reliable reference for the current trend of gun sales across the United States.

Every month, the FBI publishes a list of data showing the number of background checks for gun purchases processed by NICS in the previous month. Most applicants who enter the system and undergo a background check are eligible to purchase a firearm, except for some special reasons such as a criminal record.

The FBI data shows that after the U.S. presidential election last November, the slightly slower trend of background checks on gun purchases rebounded. In December, the number approached 4 million, with more than 135,000 in California alone.

The Second Amendment to the U.S. Constitution grants Americans the right to own firearms. To legally purchase a gun, every eligible candidate must provide their personal information, fill out federal documents truthfully, and undergo a rigorous NICS background check. Only when a background check is passed will a gun dealer sell a firearm to a buyer.

The Epoch Times talked to some California residents who managed to buy their first gun last year or earlier this year. They said that people believe that the left is trying to control or even ban gun ownership. During his campaign, President Joe Biden said that he would implement gun control, and after taking office, he proposed gun restrictions, which prompted more people to buy guns faster.

Another first-time gun owner in South California who only provided her first name, Susan, told The Epoch Times that she just legally purchased her first gun in February.

“No one likes violence,” she said. “But now it’s the left who is using policy to treat us violently. We need to be able to defend ourselves. We buy guns legally. We buy guns to protect ourselves and our families. We will not hurt others. This is our constitutional right. We can choose to buy guns legally or not buy guns, but the choice should be in our hands, not to be taken away or manipulated by the left.”

Susan added that many of her friends never thought about buying guns before last year’s epidemic, but later, as leftist policies became “more and more outrageous” and began to protect prisoners, everyone felt uneasy and started buying guns to protect themselves.

Meanwhile, California has seen a surge in crime due to increasingly lenient prison policies, laws that lessened criminal sentences, and cuts in police funding. In less than two weeks after Christmas, 47 people were shot and killed in Los Angeles, Los Angeles Daily News reported.