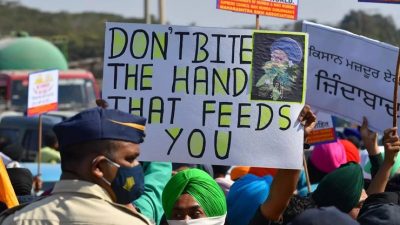 All Global Research articles can be read in 27 languages by activating the “Translate Website” drop down menu on the top banner of our home page (Desktop version).

In September 2021 the UN will hold a Food Systems Summit. The aim will be to reshape world agriculture and food production in the context of the Malthusian UN Agenda 2030 “sustainable agriculture” goals. The recent radical farm laws from the government of Narenda Modi in India are part of the same global agenda, and it’s all not good.

In Modi’s India, farmers have been in massive protest since three new farm laws were rushed through Parliament last September. The Modi reforms were motivated by a well-organized effort of the World Economic Forum (WEF) and its New Vision for Agriculture, part of Klaus Schwab’s Great Reset, the corporate side of the UN Agenda 2030.

In September, 2020 in a rushed Parliamentary voice vote, rather than a duly-registered formal vote, and reportedly with no prior consultation with Indian farmer unions or organizations, the government of Prime Minister Narenda Modi passed three new laws radically deregulating India’s agriculture. That has sparked months of national farmer protest and nationwide strikes.The protests which are spreading across all India, demands repeal of the three laws.

In effect the laws end restrictions on large corporations’ buying land and stockpiling commodities to control farmer prices. They also allow large multinational businesses to bypass local or regional state markets where farmers’ produce is normally sold at guaranteed prices, and allows business to strike direct deals with farmers. This all will result in the ruin of an estimated tens millions of marginal or smallholder farmers and small middlemen in India’s fragile food chain.

The new Modi laws are measures the IMF and World Bank have been demanding since the early 1990s to bring Indian agriculture and farming into the corporate agribusiness model pioneered in the USA by the Rockefeller Foundation decades ago.Until now no Indian government has been willing to attack the farmers, the country’s largest population group, many of whom are on tiny plots or bare subsistence. Modi’s argument is that by changing the present system, Indian farmers could “double” income by 2022, an unproven,dubious claim. It allows corporations to buy farm land for the first time nationally so large companies, food processing firms, and exporters can invest in the farm sector.Against them a small farmer has no chance. Who’s behind the radical push? Here we find the WEF and the Gates Foundation’s radical globalized agriculture agenda.

The laws are a direct result of several years’ effort of the World Economic Forum and its New Vision for Agriculture (NVA) initiative. For more than 12 years the WEF and its NVA has pushed a corporate model in Africa, Latin America and Asia. The “big target” has been India, where resistance to corporate takeover of agriculture has been fierce ever since the failed 1960’s Green Revolution of the Rockefeller Foundation. For the WEF Great Reset, better known as the UN Agenda 2030 for “sustainable agriculture,” India’s traditional farm and food system must be broken. Its smallholder family farmers must be forced to sell to large agribusiness conglomerates and regional or state-level protections for those farmers eliminated. It will be “sustainable,” not for the small farmers, but rather the giant agribusiness groups.

To advance that agenda the WEF created a powerful group of corporate and government interests called the NVA India Business Council. Its website at the homepage of the WEF states, “The NVA India Business Council serves as an informal, high-level leadership group to champion private sector collaboration and investment to drive sustainable agricultural growth in India.” An idea what they mean by “sustainable”is found in their membership.

Import and Die: Self-sufficiency and Food Security in India

In addition to top Modi backer Guatam Adani on the WEF NVA India Business Council, MukeshAmbani, sits on the Board of Directors of Klaus Schwab’s World Economic Forum. Ambani, another top Modi backer, is Chairman and Managing Director of India’s largest conglomerate, Reliance Industries, and Asia’s second wealthiest person worth some $74 billion. Ambani is a strong advocate of the radical farm reform as Reliance stands to reap huge gains.

In December farmers in Punjab burned effigies of Prime Minister Modi, along with Reliance Industries chairman Mukesh Ambani, and Adani Group chairman Gautam Adani, accusing them of being behind the new laws of Modi.

For anyone with even a slight idea of these corporate behemoths, it is clear that the interests and welfare of India’s estimated 650 million farmers are not the priority. Notably, IMF’s Chief Economist Gita Gopinath, an Indian now in USA, has endorsed the laws, and has said that India’s recently-enacted agriculture laws have the “potential” to increase farmers’ income.

On 26 November a nationwide general strike began that involved approximately 250 million people in support of the farmers. Transport unions representing over 14 million truck drivers have come out in support of the farmer unions. This is the biggest challenge to the BJP Modi regime to date. The fact the government refuses to back down suggests it will be a bitter battle.

For the Agenda 2030, or Great Reset to transform the global food and agricultural industries as Klaus Schwab prefers to call it, to succeed, it is highest priority that India, with the world’s largest population, be brought into the globalist web of corporate agribusiness control. Clearly the timing of the Modi deregulation has in mind the UN 2021 Food Systems Summit.