by Iain Davis, Off Guardian: COVID 19 vaccine trials appear to have caused some confusion. Hopefully, this article might help clear things up a bit. People genuinely appear to believe that the COVID 19 vaccines have undergone clinical trials and have been proven to be both safe and effective. That belief is simply wrong.

The main point is this. If you decide to have Pfizer and BioNTech’s experimental mRNA-based BNT162b2 (BNT) vaccine, or any other claimed COVID 19 vaccine for that matter, you are a test subject in a drug trial.

The most important, meaningful phase of CV-19 vaccine trials has barely begun, let alone been completed

The mRNA in the BNT vaccine was sequenced from the 3rd iteration of the original WUHAN published Genome SARS-CoV-2 (MN908947.3). However, the WHO protocols Pfizer used to produce the mRNA do not appear to identify any nucleotide sequences that are unique to the SARS-CoV-2 virus. When investigator Fran Leader questioned Pfizer they confirmed:

The DNA template does not come directly from an isolated virus from an infected person.

Nor are there any completed clinical trials for these vaccines. Trials are ongoing. If you are jabbed with one, you are the guinea pig. This may be fine with you but it’s not a leap of faith I or my loved ones wish to take. However, everyone is different.

On December the 8th the BBC reported a study in the Lancet and categorically stated:

The BBC had no justification to make this claim. The study in the Lancet did not confirm anything of the sort. The researchers wrote:

ChAdOx1 nCoV-19 has an acceptable safety profile and has been found to be efficacious against symptomatic COVID-19 in this interim analysis of ongoing clinical trials.

This was an interim analysis funded by, among others, CEPI and the Bill and Melinda Gates Foundation. The analysis was based upon trials which are years from completion and haven’t reported anything. The researchers also stated:

There is no clear scientific evidence establishing either the safety or efficacy of proposed COVID 19 vaccines. The BBC and other MSM reports that this evidence exists are false.

We are going to focus on Pfizer and BioNTech’s BNT vaccine but all the manufacturers have essentially exploited the same trick. The regulators and governments have worked with the pharmaceutical corporations to conflate the limited data from the initial, or phase one, trials with the incomplete and ongoing data collection from the substantially larger phase two and three trials. The MSM have then falsely claimed the 1,2,3 phase trials are complete and insinuated that the untested data demonstrates vaccine efficacy and safety.

In reality, not only has the reporting of existing data been manipulated to show efficacy that isn’t evident in the raw data itself, the most important and meaningful phases of the trials have barely begun, let alone been completed.

Recently the UK Financial Times reported that the UK regulators (the MHRA) are due to approve Astrazeneca/Oxfords AZD1222 [ChAdOx1] COVID 19 Vaccine. The FT revealed an anonymous statement from the UK Department of health:

The medicines regulator is reviewing the final data from the University of Oxford/AstraZeneca phase 3 clinical trials to determine whether the vaccine meets their strict standards of quality, safety and effectiveness.

Thus giving the public the impression that the trials are complete and that the regulators have strict safety standards. The 1,2,3 phase trial for AZD1222 was registered with the U.S. Centre for Disease Control as clinical trial NCT04516746 [Archived 29th December 2020]. It is incomplete and the estimated end date is February 21st 2023. The CDC state:

Astrazeneca are years away from reporting any “final data.” It is impossible for the UK Department of Health to review it, because it doesn’t exist.

NCT04516746 is one of four trials of AZD1222. Another Russian arm of the AZD1222 trial was suspended after a Suspected Unexpected Serious Adverse Reaction (SUSAR) event occurred. The SUSAR supposedly happened in the United Kingdom after a 37 year old women developed inflammation of the spinal chord. It appears the Russian Ministry of Health have yet to reinstate their arm of the Astrazeneca/Oxford trial while it has resumed in the UK and elsewhere. 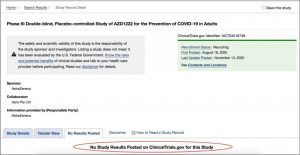 On November 18th Pfizer and BioNTech announced they had concluded their phase three trial of BNT. They had demonstrated efficacy of 95% and U.S. Food and Drug Administration’s (FDA’s) Emergency Use Authorization (EUA) safety data milestone had been met.

The only part of this claim that was true was compliance with FDA emergency safety data milestones. They have not concluded their phase three trials. They haven’t even fully completed phase one.

Under section 564 of the Federal Food, Drug, and Cosmetic Act (FD&C Act) so called “unapproved” drugs are allowed on the market in emergencies. Similarly, in the UK, authorisation under Regulation 174 of the Human Medicine Regulations 2012 (as amended) permits the same.

Having also been approved in the UK, this is why the Medicines and Healthcare products Regulatory Agency (MHRA) state:

This medicinal product does not have a UK marketing authorisation

The fact that there are no completed clinical trials for the Pfizer and BioNTech BNT vaccine also explains why the FDA State:

Additional adverse reactions, some of which may be serious, may become apparent with more widespread use of the Pfizer-BioNTech COVID-19 Vaccine.

[There is]…currently insufficient data to make conclusions about the safety of the vaccine in sub-populations such as children less than 16 years of age, pregnant and lactating individuals, and immunocompromised individuals…..[the] risk of vaccine-enhanced disease over time, potentially associated with waning immunity, remains unknown.

Yet the first people to receive this vaccine are the most vulnerable in society, many of whom are immunocompromised. The precautionary principle appears to have been abandoned. The notion that the purpose of the BNT vaccine roll out is to save life appears untenable.

The Pfizer announcement enabled politicians to pretend to cry on national television while others were really excited. UK Prime Minister Boris Johnson said it was “fantastic news,” and the BBC said it was “good news” and “really encouraging.” Everyone was thoroughly impressed with the 95% effective claim.

However, this was based upon relative risk reduction. That is the declared percentage difference between the vaccinated group’s 8/18310 chance (0.044%) of developing COVID 19 against a 162/18319 (0.88%) chance of COVID 19 symptoms without the vaccine. As this larger group of 43,000 people have yet to be trialled, there is no basis for this claimed outcome. But it is what it is, and we can use these reported figures here.

It should be noted this only refers to an alleged reduction of COVID 19 symptoms among those who have the virus. The tested endpoints do not demonstrate that the vaccine will either reduce the spread of infection or save lives. It should also be noted that these figures suggest the threat from COVID 19 is vanishingly small.