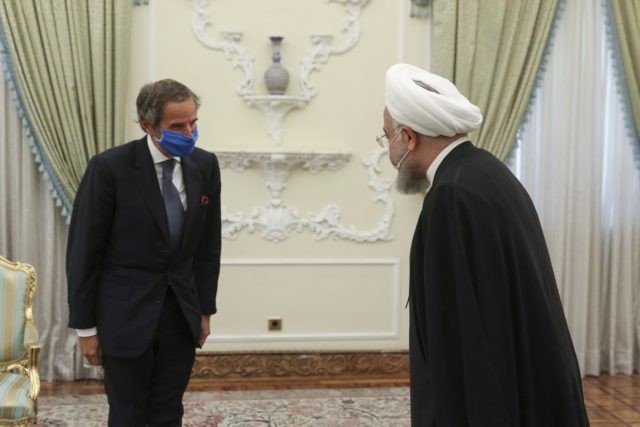 Iran is producing half a kilo of uranium enriched  to 20 percent purity per day, the head of Iran’s Atomic Energy Organization said Monday, constituting a clear violation of the 2015 nuclear accords.

Ali Akbar Salehi’s remarks, published on the official site of Iran’s supreme leader Ali Khamenei, follow an announcement two weeks ago that President Hassan Rouhani had given the order to achieve 20 percent uranium purity at the underground Fordo facility.

According to the Times of Israel, 20 percent purity is short technical step away from weapons-grade 90 percent enrichment.

Iranian nuclear scientists “are producing 20 grams every hour, meaning that practically, we are producing half a kilo every day,” Salehi told the Khamenei.ir website.

He went on to say that if “other parties” returned to the deal, also knows as the Joint Comprehensive Plan of Action (JCPOA)m “we will return to our undertakings too.”

Britain, France and Germany, which comprise the European signatories on the deal, on Saturday warned Tehran has “no credible civilian use” for the uranium.

“The production of uranium metal has potentially grave military implications,” said the three foreign ministers in a joint statement, calling the enrichment the “latest planned violation.”

Iran announced Monday it has begun enriching uranium up to 20 percent, far beyond the limits set out in the 2015 nuclear accords. https://t.co/hKGDx0QxEd

“The Trump administration chose what it called the maximum pressure campaign on Iran. The result was that this strategy only increased the risk and the threat,” Le Drian told the Journal du Dimanche newspaper.

“This has to stop because Iran and – I say this clearly – is in the process of acquiring nuclear [weapons] capacity,” he said.

Le Drian added it was of utmost urgency to “tell the Iranians that this is enough” and to bring both Iran and the United States back into the nuclear deal, from which the Trump administration withdrew in 2018.