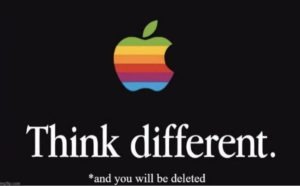 At this point we find ourselves confronted by a very disquieting question: Do we really wish to act upon our knowledge? Does a majority of the population think it worthwhile to take a good deal of trouble, in order to halt and, if possible, reverse the current drift toward totalitarian control of everything? If the United States of America is the prophetic image of the rest of the urban-industrial world as it will be a few years from now — recent public opinion polls have revealed that an actual majority of young people in their teens, the voters of tomorrow, have no faith in democratic institutions, see no objection to the censor­ship of unpopular ideas, do not believe that govern­ment of the people by the people is possible and would be perfectly content, if they can continue to live in the style to which the boom has accustomed them, to be ruled, from above, by an oligarchy of assorted experts.

That so many of the well-fed young television-watchers in the world’s most powerful democracy should be so completely indifferent to the idea of self-government, so blankly uninterested in freedom of thought and the right to dissent, is distressing, but not too surprising. “Free as a bird,” we say, and envy the winged creatures for their power of unrestricted movement in all the three dimensions. But, alas, we forget the dodo. Any bird that has learned how to grub up a good living without being compelled to use its wings will soon renounce the privilege of flight and remain forever grounded. Something analogous is true of human beings. If the bread is supplied regularly and copiously three times a day, many of them will be perfectly content to live by bread alone — or at least by bread and circuses alone.

Take the right to vote. In principle it is a great privilege. In practice as recent history has repeatedly shown the right to vote by itself is no guarantee of liberty. Therefore if you wish to avoid dictatorship by referendum break up modern society’s merely func­tional collectives into self-governing voluntarily cooperating groups capable of functioning outside the bureaucratic systems of Big Business and Big Govern­ment.

This isn’t how I intended to return to writing. There was supposed to be a new website and a new focus, but circumstances emerged and laid waste to my plans. So here I am, back again. I’m a bit rusty so bear with me.

There’s no reason to rehash what happened over the last several days, but the gist of it is that significant components of internet infrastructure were weaponized for ideological and political purposes. If we’re being honest with ourselves, we all knew this day was coming. We just didn’t want to admit it or confront it, because it’s not a comforting or easy thing to admit or confront. But the day has arrived and we’re no longer in a position to ignore it. The most concerning aspect isn’t that it happened, but that it could happen at all. The internet is clearly broken, possibly dying, and if we want to digitally associate freely again at some point in the future, we have no choice but to fix it.

Although I have no team in the parochial political fight, I’ve chosen one in the broader ideological battle. The wielding of such concentrated and unaccountable power over human communication has crossed a very serious line and sets us up for a future world I’m uninterested in participating in. As such, we have no choice but to confront the issue head on.

People who think this is about Trump for me are the most ridiculous people. I never voted for him, supported him or took him seriously. While I recognize the role he played in the greater scheme of this massive historical cycle, the best thing that can happen is for him to disappear as a political force and be understood as the spectacle and distraction he was. I’m not here to lecture anyone about who they voted for, but I’m here to connect with people of all political persuasions ready to become serious and admit that a real strategy is needed to address the unaccountable power of the national security state oligarchy. Conventional political avenues are a dead end at this point.

I recognize that tens of millions of frustrated, angry and concerned minds are trying to make sense of it all and reorient themselves. This presents a giant opportunity, but also very real danger. All the emotion being felt currently can be channeled into negative avenues such as violence, aimless spectacles, Trump martyrdom or a futile search for the next political savior guaranteed to disappoint, or it can be channeled in productive ways. That’s why I’m here writing this post at this moment. Enough people are finally motivated to respond, but what really matters is the nature of this response. The dominant aggregate reaction is what will determine the future.

Most of us eagerly, or more likely lazily, embraced the current insipid and dull paradigm in the name of convenience, low prices, and free shipping, but we never stopped to consider the sacrifices made along the way. We swallowed it whole, became comfortable fat and happy, and now the facade’s about to be slowly stripped away unless we bend the knee to an ever narrowing Overton Window of speech and behavior parameters. It begins with social media purges, but it won’t end there. All the special things we sacrificed from the prior era are gone, yet the consequences are here to stay. We can’t run and hide hoping to be the last one hauled off to the abattoir. It’s time to step up.

In this regard, I have a simple suggestion. Cancel Yourself. Unshackle yourself mentally from our suffocating and bland corporate culture while you still have a chance to do it voluntarily. Cancel yourself before they have a chance to cancel you. In this there is power. You’re taking charge and acting proactively as opposed to reacting. We need to play the game on our own terms, because the game’s coming for us either way. If you were a Trump supporter, forget about him. If you held your nose and voted for Biden, don’t expect anything good. If you’re a Sanders supporter, forget it, he’s done. Most importantly, don’t waste time and energy thinking about 2024 and who might run. A lot of really bad stuff can happen between now and then and there may not be much of a country left at that point. Focus on today and focus on what you’re willing to do personally in the near-term.