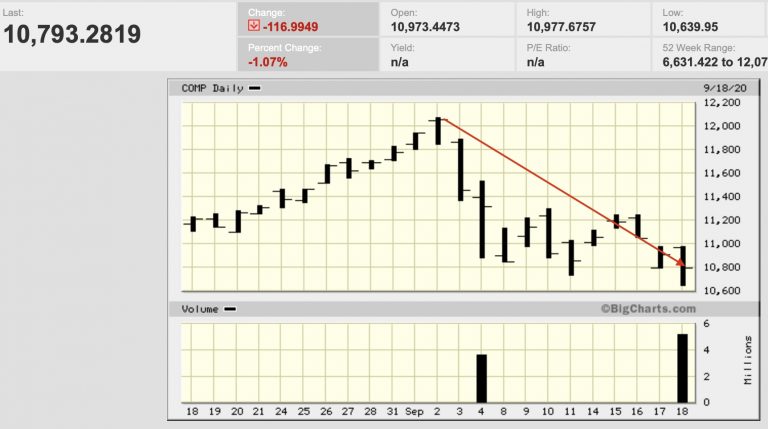 All three major stock-market indices completed three consecutive weeks of falling today as we head into fall next week. The NASDAQ, as you see in the opening graph, has set up a clear trend of perfectly aligned closings this week.

This summary of the market in September — the bullseye for my target dates for the market’s big fail — will be short but sour, as I try to focus my writing time on my next Patron Post. I just could not resist commenting on this week’s decisive market close.

The NASDAQ is important because it is loaded with those high-tech stocks that have been the only thing taking the market up at all year. The generals, however are retreating.

Apple, for example, was the fastest to rise in the market’s melt-up stage and is already the fastest to have fallen into its own bear market, which it entered today by ending more than 22% below its last all-time high on Sept. 1. That’s half a trillion in value snapped off in what, today, became Apple’s fastest fall into a bear market since 2008 when it lost half its value in forty days. It may arguably be Apple’s fastest fall ever:

Apple fell by 50% in 21 days during the October surprise of 1987. However, that one took a few days longer and then mostly happened in one all-out market-busting day known as Black Monday. It hardly counts, anyway, since Apple was only priced at $14.80 per share!

Algorithmic charts (percentage drops) are not always the best comparison, as some claim, since it’s a lot easier to fall 50% as a fledgling upstart almost single-product company when that only means share prices losing $7 than it is as a mature, multi-trillion-dollar, multi-product, multi-national company with hard assets and markets all over the world. No comparison really.

Even in ’91 when Apple fell more in a month than it has this month, Apple’s share price was a measly $18.19; and in 2000, its next comparable plunge, it was still only $26.75 at its zenith and a couple of stock divisions away from today’s scalding prices.

On Sept. 4, alone, Apple experienced the largest single-day loss in stock value of any US company in history.

So, it may be fair to claim this has been Apple’s fastest fall into a full-on bear market ever if you attempt to balance percentage drops from minuscule numbers with a half-trillion-dollar point drop in less than three weeks. Even the 2008 plunge had forty days to play out, while this one is still ongoing, and I think this one hit its “bear” level sooner.

Possibly more important today than the NASDAQ’s downward trend for the month or the big bite out of the big Apple is the S&P’s close. It finally hammered and held decisively below its 50-day moving average (the tan line), which had provided a repeated floor of support this month:

U.S. stocks just posted their third consecutive weekly decline, and the S&P 500 just closed below its 50-day moving average for the first time since April…. Those types of moves are “yet further confirmation that the corrective process is ongoing….”

Even so, a near-term rebound could be on its way, as “actual support levels are coming into play on the index as well as on the stock level….”

The S&P’s next level of support will come at the 3,200 level where it tags its recent plateau and its less-signficant 100-day moving average. Then it gets even stronger support around 3,000, which has been both a ceiling and a floor of support in the past.