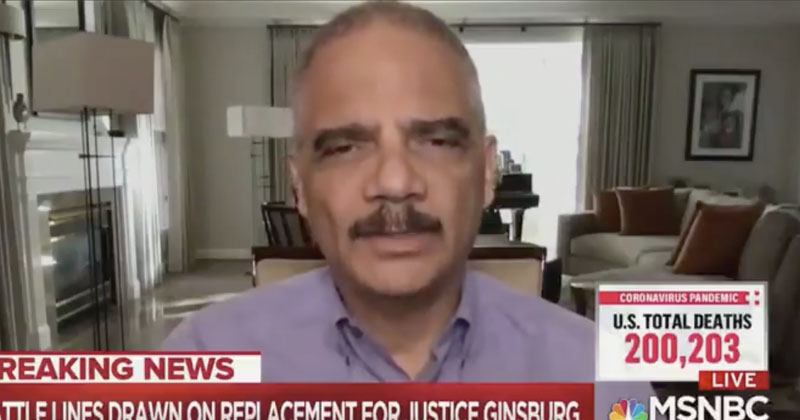 ‘At a minimum, as part of that reform package, I think additional justices need to placed on the Supreme Court,’ he says

NEW: @EricHolder says if Republicans rush through another justice it would be an “illegitimate” 6-3 majority and Democrats should respond with court reform that includes adding additional justices to the Supreme Court. pic.twitter.com/JQohzRJZWF

“If in fact they are successful in placing a justice on the court, I think what Democrats have to do, assuming that Biden is president and there is a Senate majority for the Democrats, we need to think about court reform. And at a minimum, as part of that reform package, I think additional justices need to placed on the Supreme Court.”

Notably, Holder’s proposal is something Democrats have been planning for years.

“This has been the plan all along, even before Ginsburg’s death. Democrats can’t wait to end the filibuster and rip up the Constitution so they can force their left-wing agenda on the American people. Anyone who reveres the country and the Constitution cannot let these people gain power,” Townhall reported.

In a bit of irony, the late Justice Ruth Bader Ginsburg had opposed the notion of expanding the Supreme Court, calling it “partisan” and “a bad idea.”