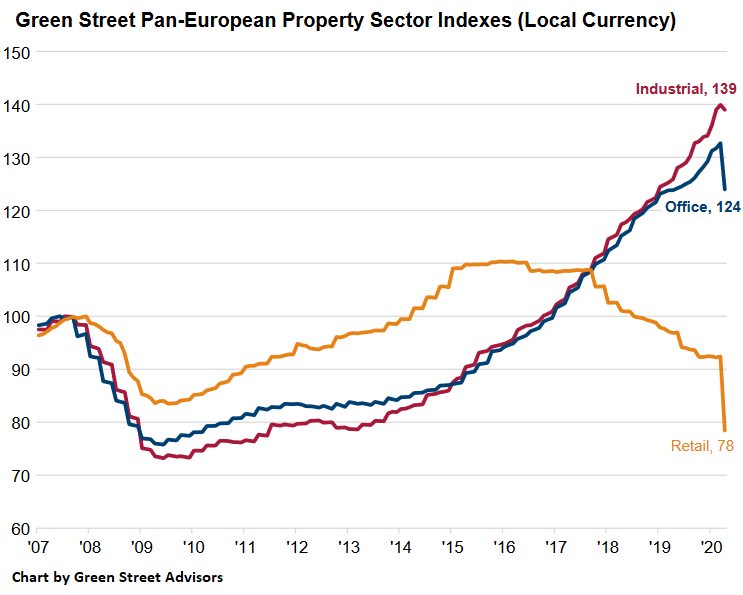 Over the past few years, the various sectors of commercial real estate have split into different trajectories, with some property types, such as industrial and office, rising to new highs, and with retail properties dropping further and further. Then came the issues surrounding Covid-19 and the lockdowns.

The trajectories suddenly turned into the same direction: down for all, but to different degrees, some sectors barely ticking down and other sectors dropping more sharply. And retail properties plunged.

Tenants of retail properties are now having trouble paying rent, or are unwilling to pay rent, as their stores are closed. Some of them will go out of business altogether; others will attempt to stay in business but renegotiate their leases. This whole dynamic has accelerated, as many future years of more or less gradual change are now being distilled into a few months. It has thrown the retail property sector into turmoil.

The indices for office and industrial properties came off their all-time highs in March. But the all-time high of the retail index was the plateau period of mid-2015 to early 2016. Since then, the retail property index has plunged 29% (chart via Green Street Advisors, click to enlarge):

“The commercial real estate transaction market has largely come to a standstill as buyers and sellers adjust their underwriting expectations and try to agree on a fair price,” the Green Street report notes.

“During periods of wide bid-ask spreads, asset values often move closer to the bid than the ask. There is little to no investor demand in the retail sector and waning investor demand for sub-prime office buildings today.

“However, high-quality office and most industrial assets are still likely to trade at punchy capital values per square meter.”

The overall Green Street Pan-European CPPI, which is an average of the retail, office, industrial sectors, dropped 7.5% in April from March and is down 3.4% over the past 12 months: