The Empathy Suite of the Palms Hotel in Las Vegas combines colorful, kiddie designs with pills and opioids. It doesn’t take a great deal of imagination to picture what this place was designed for. Here’s a top comment from a YouTube video touring the Empathy Suite.

Just by looking at pictures of the place, one gets a visceral gut feeling of pure foulness. And, when one understands the symbolism of the occult elite, that feeling gets worse. Because one can only imagine what actually happens there.

One of the selling points of the Empathy Suite is that it features exclusive works of art by Damien Hirst – who happens to be one of the occult elite’s favorite artists. Therefore, in order to fully understand the “spirit” of this hotel room, we need to take a quick look at Damien Hirst and his body of work. 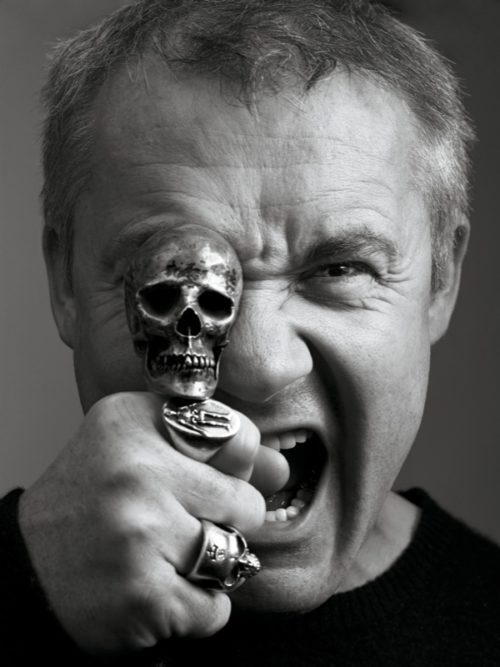 Damien Hirst does the one-eye sign using a skull in Interview Magazine. That sums up everything you need to know about him.

Damien Hirst is reportedly the richest living artist in the UK with wealth estimated at £215 million. Throughout his career, Hirst was supported by extremely rich and powerful people such as Charles Saatchi, an Iraqi-British Jewish businessman who founded Saatchi & Saatchi, the world’s largest advertising agency in the 1980s.

Right from the start of his career, Hirst’s works revolved around the theme of death. One of his first “works of art” is a picture of him smiling next to a severed head. He soon became famous for a series of artworks in which dead animals (including sharks, sheep, and cows) are preserved—sometimes having been dissected—in formaldehyde.

Hirst often combines his morbid subjects with Christian themes to create rather blasphemous works of art. 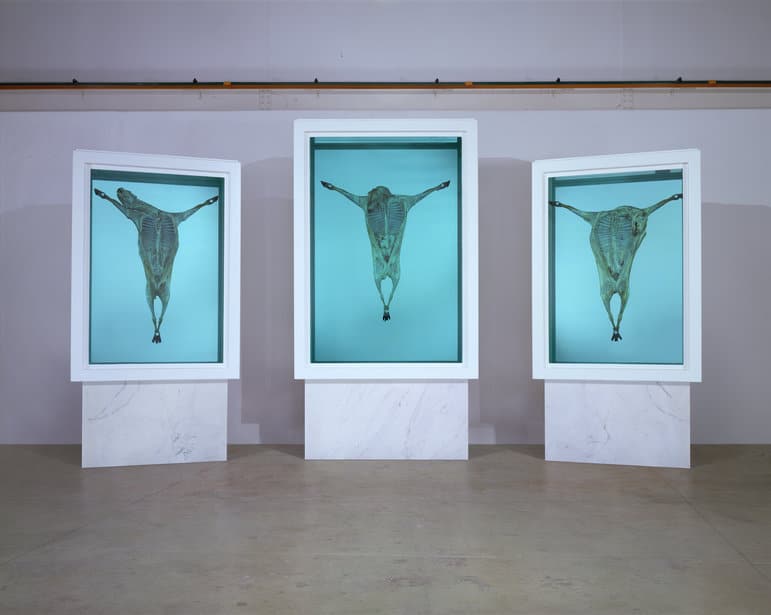 The piece titled God Only Knows features three dead sheep that are “crucified” the same way Jesus was crucified with two thieves. 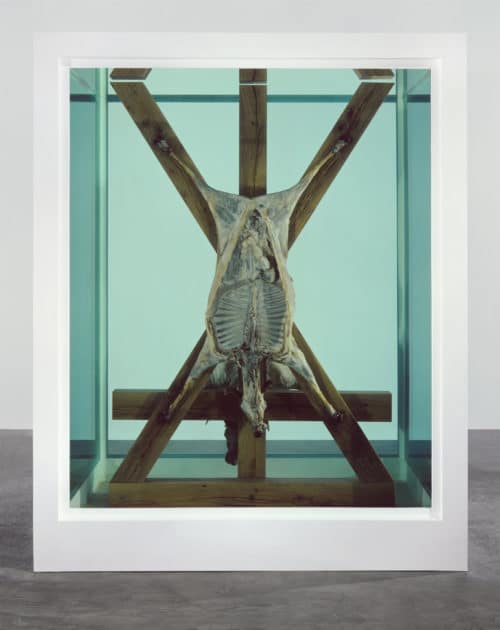 The piece titled God Knows Why consists of a sheep that was “crucified” on an inverted cross. Pure satanic inversion. 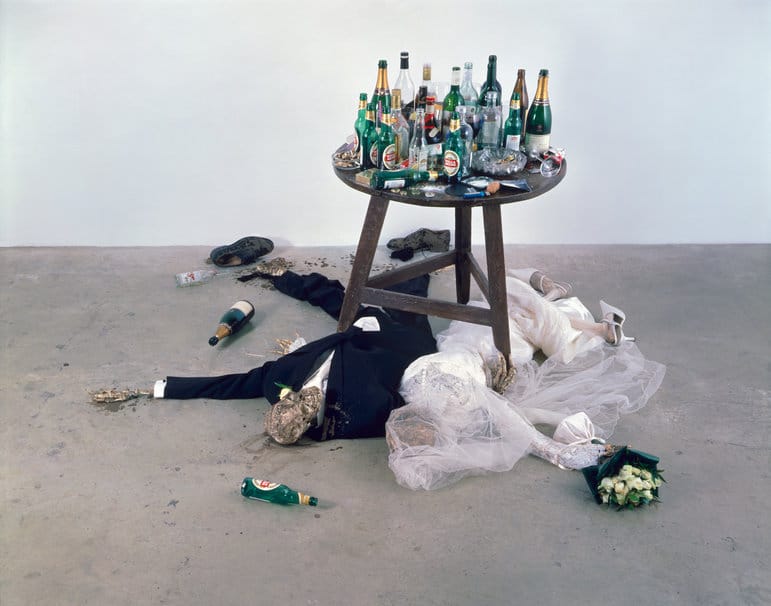 Adam and Eve Under the Table features two actual human skeletons laying on the floor under empty bottles and random garbage. 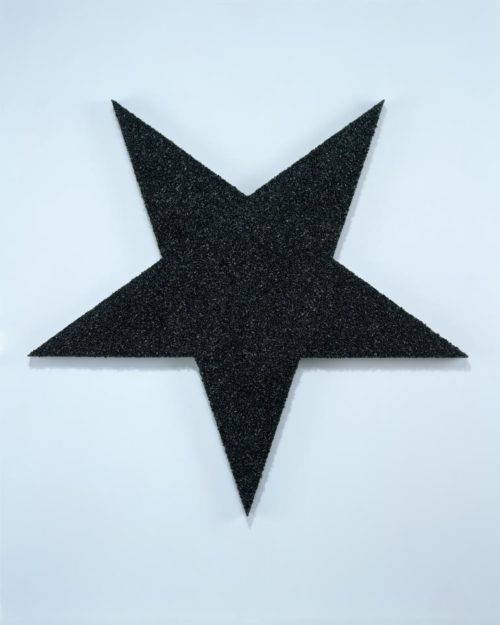 This piece is called Devil Worshipper. As you can see, it is an inverted pentagram (the favorite symbol of Satanists and the occult elite). It is entirely made of … dead flies. 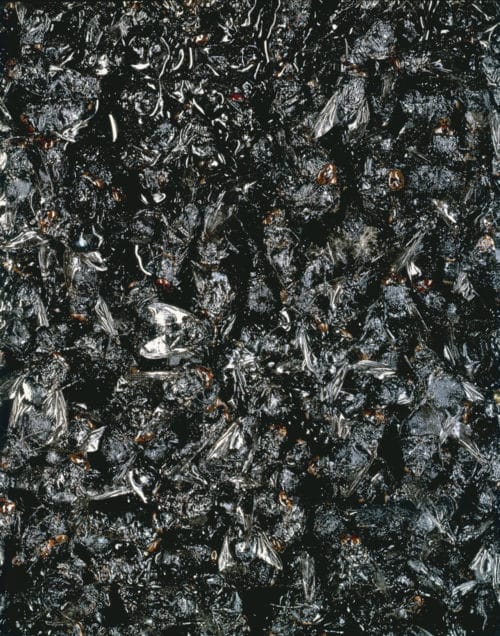 A close-up of one of Hirst’s many works made of dead flies. 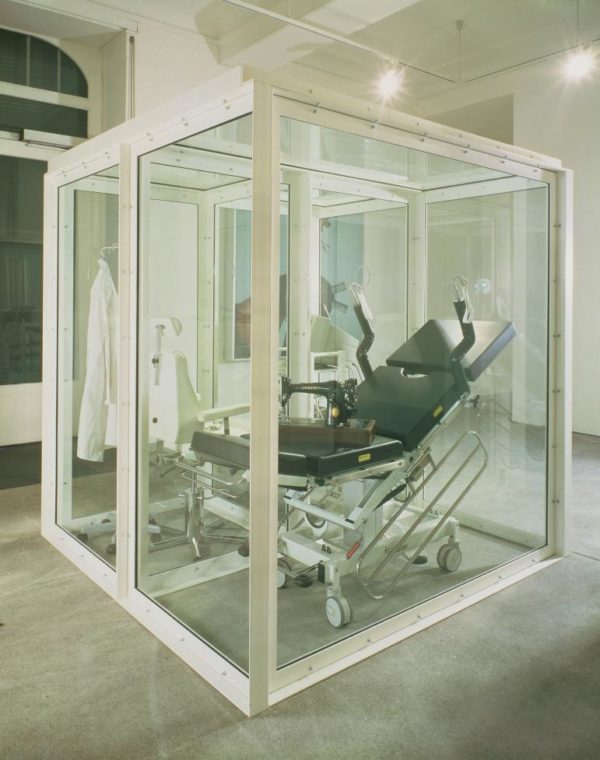 Hirst is also know for creating “vitrines”, which are usually made of an assortment of objects inside glass compartments. This one contains an operating table on which sits a sewing machine. What kind of horrific procedure is going on here?

So, the people at the Palms Hotel saw this stuff and said: “We need him to decorate our most sumptuous spaces right now!”.