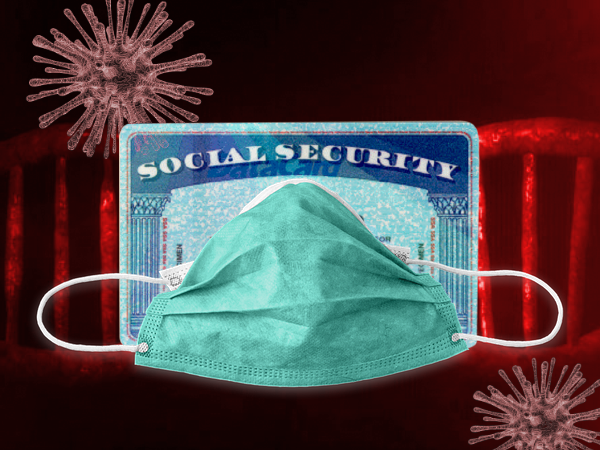 It appears that the coronavirus, officially known as COVID-19, could claim a surprising victim: the 2021 COLA from Social Security.

According to official statistics, more than 64 million Americans receive more than $1 trillion in Social Security benefits. It also represents about 33% of total income for the elderly.

So when the “cost-of-living adjustment” comes out each year, a large number of Americans are paying attention. For 2020, that adjustment resulted in an increase of 1.6%. Not a huge increase – and not quite enough to keep pace with the official rate of inflation – but certainly better than nothing.

A number of factors go into figuring out the COLA each year, but the main one is a measure of inflation known as the Consumer Price Index for Urban Wage Earners and Clerical Workers (CPI-W).

According to The Motley Fool, “The CPI-W is designed to measure how the price of an identical basket of goods and services changes over time.”

The problem is, the method Social Security uses to calculate COLA doesn’t keep pace with the CPI-W very well. The same piece from The Motley Fool explains:

According to an analysis from The Senior Citizens League, seniors have seen the purchasing power of their Social Security benefits decline by 34% since the year 2000.

Efforts by the Social Security Administration should maintain or improve buying power, not hurt it. Can you imagine losing more than a third of your buying power?

One possible reason for this decline in purchasing power, says The Motley Fool article, is that “Social Security is basing ‘raises’ to be given predominantly to seniors on the spending habits of working-age urban and clerical workers, who rarely are receiving Social Security benefits.”

Another possible reason could be the rate of price inflation itself. Official sources like the Bureau of Labor Statistic (BLS) report it at 2.5%. But the “real” inflation rate reported with older methods could be anywhere from 6% to 10%, according to ShadowStats.

Inflation eats into Social Security raises every year. That’s bad enough. But the coronavirus could also help create the illusion of a higher COLA in 2021.

It appears that food and energy prices are already on the move, thanks in part to the coronavirus that has spread rapidly since late January.

For example, global crude oil prices are feeling the sting of COVID-19, with West Texas Intermediate crude down 15% year to date. The Motley Fool says that this will “have a negative impact on the energy component within the CPI-W, which made up 8.072% of the CPI-W’s total weighting, as of December 2019.”

Conversely, the prices of food and household goods are moving in the opposite direction:

We’ve witnessed a sharp increase in food and household good inflation in China as COVID-19 has spread. China recently reported that its Consumer Price Index in January rose 5.4% from the prior year period, marking the fastest rate of inflation for the country in eight years.

Given the uncertainty caused by coronavirus, it’s hard to say what inflation will look like for the year. If the drop in oil offsets the rise in food and household products, then the COLA might be minimal.

Then again, food or energy scarcity caused by shutdowns could cause a rapid spike in prices. In such a case, the COLA for 2021 might go up more than normal.

But don’t be fooled by the illusion of a COLA that’s better than normal. After all, it hasn’t kept pace with official inflation, let alone “real” inflation, so don’t expect it to account for a major global issue like COVID-19 and its long-term impact on the economy.

Boost Your Retirement’s Defenses Against a Potential Pandemic

The situation surrounding next year’s Social Security COLA will continue to develop over the coming year. It appears that media and market attention surrounding COVID-19 won’t die down any time soon.