Donald Trump continues to go out of his way to tie his reelection chances to the stock market setting new highs by perpetually taking credit for its gains on his Twitter page. No other sitting U.S. president in history has done that because they have all been aware of how fast trends can change in the stock market. In fact, we recall a previous Republican President, George W. Bush, being dismissive of the stock market, saying “they run it up and they run it down,” or words to that effect. (On Wall Street that’s known as a bull raid and a bear raid.)

On January 9 President Trump delivered the message below on his Twitter page, mistakenly referring to a 401(K) as a 409K. The implication is that Trump has rallied the stock market by 70 to 90 percent and it’s your own dumb fault if your retirement portfolio is only up by 50 percent. Retirees could take this to mean that the sitting President of the United States is encouraging them to allocate more of their retirement assets to stocks and less to conservative bonds. 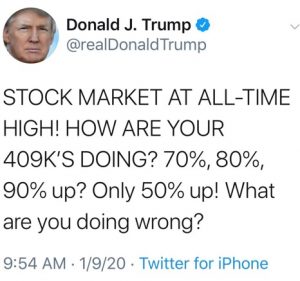 That’s not the role of a sitting President and it could very well lead to dangerous risk-taking and bad outcomes for retirees.

President Donald Trump was inaugurated on January 20, 2017. That day the Standard and Poor’s 500 Index closed at 2,271. Yesterday it closed at 3,288, an increase of 1,071 points or a gain of 44.8 percent. The bulk of that gain came on the promise and eventual enactment of a massive corporate tax cut that has ballooned the national debt and now promises to deliver the U.S. a sub-2 percent rate of growth this year and the following two years according to the World Bank’s latest forecast.

On June 15 of last year, the President Tweeted this:

So what exactly is it that has made Donald Trump so confident that he can keep the stock market in a perpetual upward trajectory until his reelection? Could it possibly be the hundreds of billions of dollars each week that the New York Fed is quietly pumping into the trading houses on Wall Street since September 17? Since that time, as the Fed reassured the markets that this money spigot will continue, indeed the stock market has set one new high after another.

But why should a spike in the stock market have an appeal to Trump’s followers? Trump continues to run on a populist message to the common folk of America. It is well known that the stock market is owned by the elite.

According to a white paper released in November 2017 by the National Bureau of Economic Research, authored by economist Edward N. Wolff, this is how the ownership of the stock market was dispersed at the end of 2016:

“…the richest 10 percent of households controlled 84 percent of the total value of these stocks, though less than its 93 percent share of directly owned stocks and mutual funds.”

And, it’s equally clear that the elite on Wall Street control the internal levers of the stock market. (See Stock Exposure Has Exploded at JPMorgan’s Federally-Insured Bank to $2.4 Trillion and Should This Be Illegal – Banks Recommending a Stock to the Public then Secretly Trading It in their own Dark Pool?) These are the very kinds of manipulations that led to the greatest stock market crash in history from 1929 to 1932 when the market lost 90 percent of its value. It should give no one any comfort that the game is rigged worse today than it was in 1929.

Kroft then asks Lewis to explain just who it is that’s rigging the market. Lewis responds that it’s a “combination of these stock exchanges, the big Wall Street banks and high-frequency traders.”

In a few months it will be six years since that broadcast (see video clip below) and yet neither the Obama administration nor the Trump administration has done anything to materially level the playing field on Wall Street. The corrupt structure is just as present today as it was in 2014. Both Obama and Trump appointed well-connected Wall Street lawyers to run the Securities and Exchange Commission. And both Obama and Trump have allowed the wild derivative gambles that deepened the financial crisis in 2008 to continue to expand.