The Iraqi Parliament yesterday voted for the government to retract the official invitation to the U.S. to deploy military forces in their country. Although many of the Sunni and Kurdish members of parliament did not attend the session, a quorum passed the resolution as had been recommended by Prime Minister Adil Abdul-Mahdi, who is expected to sign it. It does not contend that the move is in retaliation for the illegal U.S. attack in their country that killed Iran’s Quds Force leader Qasem Soleimani, but rather states: “The government commits to revoke its request for assistance from the international coalition fighting Islamic State due to the end of military operations in Iraq and the achievement of victory. The Iraqi government must work to end the presence of any foreign troops on Iraqi soil and prohibit them from using its land, airspace or water for any reason.” The Wall Street Journal reported that the parliamentarians, during and after the session chanted: “Out, out, occupier! No, no to America! No, no to Israel!”

President Donald Trump could, with adequate public support, use the opportunity to do what he has intended to do from the beginning—pull the U.S. forces out of the “endless war” zones.

Iran, meanwhile, is holding three days of mourning as the body of the slain Soleimani has been returned to Iran. Hundreds of thousands of people are filling the streets in several cities where the body will be taken before burial in Soleimani’s hometown of Kerman.

EIR has learned that the agreements signed between Iraqi Prime Minister Abdul-Mahdi and Chinese Premier Li Keqiang during Mahdi’s trip to China last September, included an “oil-for-reconstruction” agreement with China, to vastly expand China’s ongoing investments in rebuilding Iraq’s ruined oil industry and other reconstruction projects. The deal called for the substantial Chinese payments for Iraqi oil purchases to be placed in a special insured fund, which would then be used as credit for reconstruction projects, including rail, agriculture, industrial parks and more.

However, when Abdul-Mahdi returned to Iraq, the country exploded in anti-government (and anti-Iran) demonstrations, while the Iran-backed Shi’a militias were deployed to crush the demonstrations, killing approximately 460 demonstrators in the process. This forced the resignation of Abdul-Mahdi, who remains as a caretaker Prime Minister (due to the inability to gain agreement on a replacement), but is thus not legally able to implement the agreement. EIR associate Hussein Askary notes that Abdul-Mahdi, as oil minister in 2014, had arranged a similar agreement with China, which was sabotaged when ISIS took over most of the country.

It must be recalled at all times that this looming disaster was created by the 2003 Bush invasion of Iraq, on false pretenses, which President Trump has accurately described as the worst mistake ever made by this nation.

This crisis, which portends the extreme danger of a regional or even global war, comes at the same time that the U.S. Congress returns to Washington with the expected impeachment trial of President Trump in the U.S. Senate. The format for this current stage of the attempted coup against the President by British and Obama Administration intelligence agents (whose crimes are now under investigation by Attorney General Barr and special investigator U.S. Attorney John Durham) has not yet been established. It is not even clear that the panicked and hysterical Democrats will deliver the Articles of Impeachment to the Senate, as required by law, since it is abundantly clear that there is not even a crime identified in the two Articles, and the Democrats are searching for something—anything—to add on to the case.

Add to that the increasing likelihood of a near-term collapse of the massive debt and derivative bubbles in the U.S. and European financial systems. Thousands of layoffs of bank employees, the creation of “bad banks” to dump the worthless paper, and billions of dollars of liquidity pumping by the Federal Reserve into the U.S. banking system has not succeeded in stemming the tide. Increasingly negative manufacturing rates in the U.S. and Europe for many months portend further declines in the real economy, even before a collapse of the bubble. Former Fed chief Ben Bernanke warned the American Economics Association Saturday that lowering interest rates in the next downturn cannot work when they are already at or even below zero, so the Fed must be prepared to vastly expand QE, and such liquidity pumping, risking a hyperinflationary bubble, “should be made a permanent part of the U.S. central bank’s toolkit.” Bernanke, of course, is famous as the proponent of Milton Friedman’s “helicopter money.”

The world is at a turning point. Helga Zepp-LaRouche has called on Presidents Trump, Putin and Xi Jinping to act immediately to hold a summit aimed at preventing an escalation to war over the Iran crisis, to avoid the “sleep-walking into global war,” as happened in World War I. She noted that Iran has just completed a military exercise with the Russian and Chinese navies.

Maine & its Anti-First Amendment Effort to Destroy the Constitution 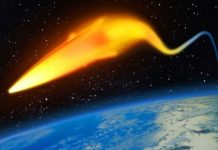