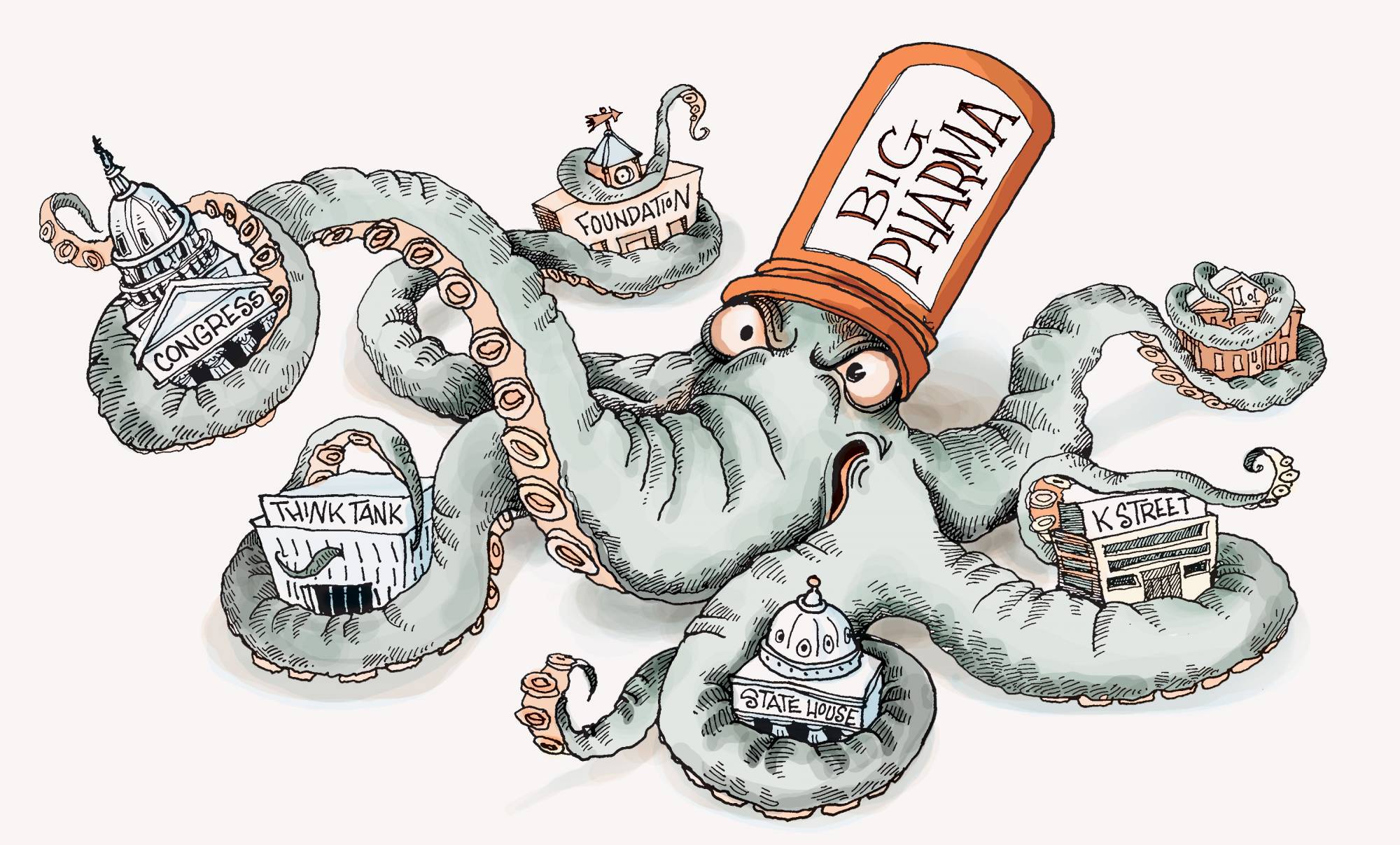 The United States runs the by far biggest and most bloated healthcare sector in the world when measured as a share of the total economy. Its annual value was $3.7 trillion, amounting to 17.9% of GDP (2018). That is nearly double the average of developed Western countries (as a share of GDP). The enormous expense does not buy Americans any better health than the Europeans get for half the price, in fact the health outcomes are far inferior in the US. In life expectancy, the US has fallen down to 33rd place, even overtaken by Cuba.

Exorbitant prices on drugs, medical treatment and health insurances are crushing consumers. Half of working age American adults have either no insurance at all or only an inadequate insurance and therefore risk being financially ruined for any kind of medical treatment – even just checking in at a hospital and leaving the same day could land you with a five-figure bill. Studies have shown that two-thirds of Americans are not able to afford a $500 unexpected cost for medical emergency, a sum which will not get you even past reception at an American hospital. According to the American Cancer Society, 137 million Americans suffered medical financial hardship in 2018. They then had to resort to borrow a total of $88 billion only to cover their necessary medical expenses. Medical bills are now the primary factor in two-thirds of all personal bankruptcies in the United States.

In a unique study covering the entire US healthcare sector, Awara Accounting has dug into the problems of the US pharma and healthcare industries, and the findings are shocking. The Awara study shows that in addition to the original sin of corporate greed, the exorbitant costs of the US healthcare system stem from layers upon layers of distortions with which the system is infested. Each part of the healthcare industry contributes to what is a giant monopoly scam: the pharmaceutical companies, medical equipment manufacturers, drug wholesalers, drug stores, group purchasing organizations, health insurance companies, doctors, clinics and hospitals, and even what should be impartial university research. And on top of that, there’s the government as a giant enabler of monopolized corporations running roughshod over the American consumer and patient.

But it is worse than that. All the monopolists (in official parlance, oligopolies) are in turn owned by the same set of investors in what is called horizontal shareholding. The same some 15-20 investors have the controlling stake in all the leading companies of the entire pharma and healthcare industry.

That’s not all. Two of the investors, BlackRock and Vanguard, are the biggest owners in almost every single one of the leading companies.

Furthermore, BlackRock is owned by Vanguard, BlackRock’s biggest owner being a mystical PNC Services, whose biggest owner in turn is Vanguard. Vanguard itself is recorded directly as BlackRock’s second biggest owner. Moreover, BlackRock and Vanguard are the two biggest owners of almost all the other 15-20 biggest investors, which most are cross-owned and together own the entire US pharma and healthcare sector. Ultimately, then we might have the situation that the whole healthcare sector and Big Pharma are controlled by one giant oligarch clan (and the very real people who stand behind them), one single interest group of oligarch investors.

Besides, it’s the same for the entire US economy. Those two investors control almost all major US companies.

Incredible? Read on, the evidence with charts and details is below in the text.

Now, this means that we are not exaggerating when we talk about an oligarch takeover of the US pharma and healthcare industries. It’s real. And very real people suffer for real.

As far as we know, this is the first report to reveal this mind-boggling extent of monopolization and concentration of ownership in US pharma and healthcare. This monopolization is fast approaching Soviet levels, with the same lethal consequences.

Another particularly important thing in the Awara report is that the US healthcare crisis and global comparisons serve as a marvelous case study to show what is wrong with neoliberalism and how the so-called free-market is not necessarily better than a mixed economy. At the very core of the US healthcare crisis, is the American ideological precept that healthcare must be a private corporate for-profit business – never mind any level of predatory monopolies. But compared with European countries the US loses hands down on every parameter. European life expectancy and health outcomes are far better at half the cost. In a European-style system all citizens have nearly equal access to general health services without having to incur financial hardship in a medical emergency. It has then been clearly shown that, the European mixed system of universal healthcare with public insurance and public hospitals, coupled with government regulation of drug prices and their availability, works best. And there’s a lesson for the wider economy, too.

Yet when you mention government regulation, price controls and universal healthcare, US politicians from both parties and most analysts (of the type that make it into mainstream media) pull out the socialism card. But this is not a question of the free-market vs. socialism. There can be no such question because, first, a mixed economy is not socialism. And, second, there is no free market in the United States any longer. What used to be a free market aka Capitalism, is nothing but a crony capitalist monopoly ridden system almost exclusively controlled by an ever more consolidating group of oligarchs. The choice is not between socialism and capitalism, but between a real market economy and the present oligarchy….

Press For Truth Under COORDINATED ATTACK AS MAILCHIMP TERMINATES ACCOUNT!!!