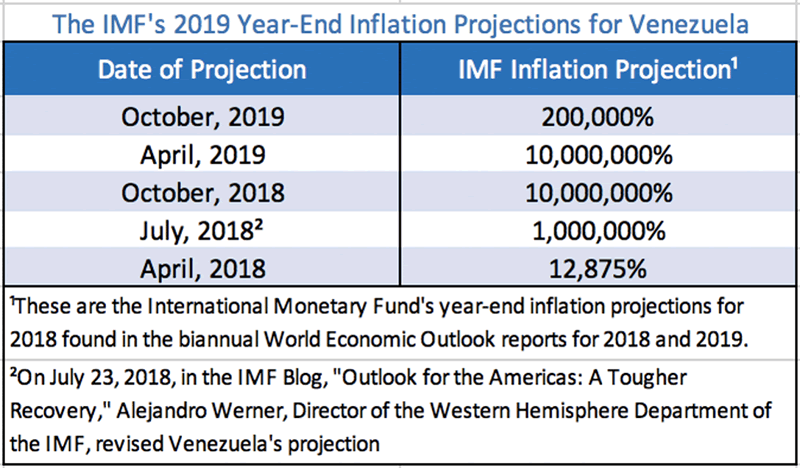 So, just what is the definition of this oft-misused word? The convention adopted in the scientific literature is to classify an inflation as a hyperinflation if the monthly inflation rate exceeds 50%. This definition was adopted in 1956, after Phillip Cagan published his seminal analysis of hyperinflation, which appeared in a book, edited by Milton Friedman, Studies in the Quantity Theory of Money.

Beyond the theory of PPP, the intuition of why PPP represents the “gold standard” for measuring inflation during episodes of hyperinflation is clear. Virtually all goods and services are either priced in a stable foreign currency (the U.S. dollar) or a local currency (the bolivar). In Venezuela, bolivar prices are determined by referring to the dollar prices of goods, and then converting them to local bolivar prices after observing the black-market exchange rate. When the price level is increasing rapidly and erratically on a day-by-day, hour-by-hour, or even minute-by-minute basis, exchange rate quotations are the only source of information on how fast inflation is actually proceeding. That is why PPP holds and why I can use high-frequency data to calculate Venezuela’s inflation rate. 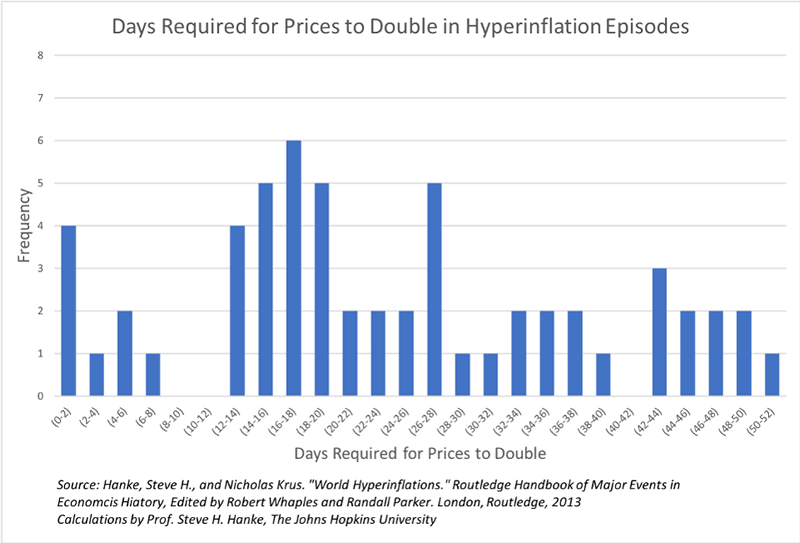 If one measures severity by the duration of a hyperinflation, Venezuela’s hyperinflation, which started in November of 2016 and has yet to end, is severe. It has lasted for thirty-six months and counting. As the frequency distribution and table below show, there have only been two hyperinflations that have lasted longer than Venezuela’s. 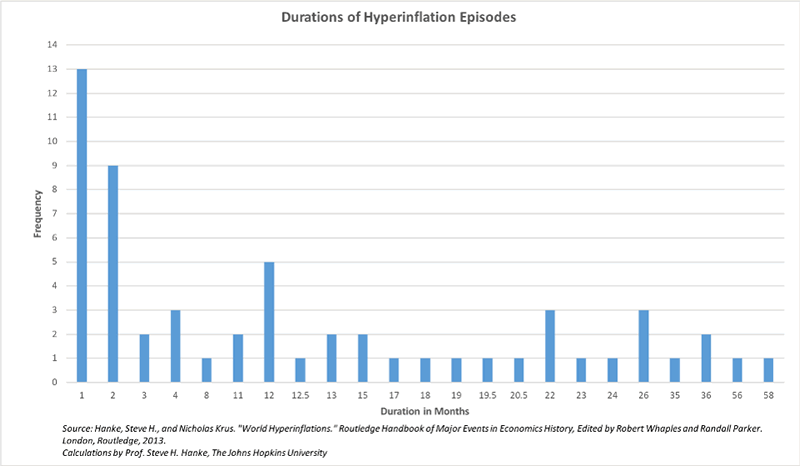 So much for the definition and accurate measurement of Venezuela’s hyperinflation. What about forecasts for the course and duration of Venezuela’s episode? Well, you can’t reliably forecast what heights a hyperinflation will reach, or when those heights will be reached.

Surprisingly, that impossibility hasn’t stopped the International Monetary Fund (IMF) from throwing economic science to the winds. Yes, the IMF has regularly been reporting what are, in fact, absurd inflation forecasts for Venezuela. The table below presents the IMF’s finger-in-the-wind forecasts (read: nonsensical folly). Indeed, the IMF’s forecasting folly should be apparent to the naked eye. Just look at the table below. The IMF’s forecasts for 2019’s year-end inflation have ranged from 200,000% to a whopping 10,000,000%.