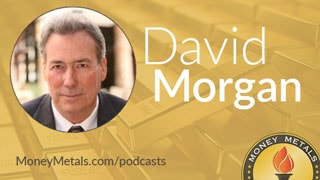 Coming up David Morgan of The Morgan Report joins me to break down the recent move in the metals, explains why he believes the move is a result of something no one is talking about – and he also gives us some key levels for silver, as it looks to gather strength from here. So don’t miss another must-hear conversation with David Morgan, coming up after this week’s market update.

What a wild week it’s been for investors.

Gold prices eclipsed the $1,500 level on Wednesday for the first time in over six years. Meanwhile, silver pushed above $17 an ounce to record a one-year high.

The money metals are becoming increasingly attractive as President Donald Trump ramps up his battles against China abroad and the Federal Reserve at home.

On Monday, the Trump administration formally branded China a “currency manipulator.” China’s central bank had moved to push the yuan lower against the U.S. dollar in apparent retaliation for new U.S. tariffs. The yuan traded at its cheapest exchange rate versus the dollar in more than a decade.

Curiously, the U.S. Dollar Index also traded lower this week against the euro and yen. Perhaps the Trump administration is engaging in some currency manipulation of its own through the Treasury Department’s Exchange Stabilization Fund and the International Monetary Fund. Treasury Secretary Steven Mnuchin called on the IMF to help put brakes on countries that cheapen their currencies to gain trade advantages.

A former Treasury Secretary, Larry Summers, said that we may now be at the most dangerous moment since the last global financial crisis ended in 2009. The circumstances are different today, but in some ways the risks are more extreme.

The entire world monetary order is at risk. President Trump is now explicitly ditching the “strong dollar” posturing of previous presidents. He wants a weaker dollar and hopes he can pressure the Federal Reserve into cooperating with bigger and more rapid interest rate cuts.

A shift toward a weak dollar policy could make foreign holders of U.S. assets nervous. Close to $7 trillion in Treasuries are now held by foreigners. If they begin losing confidence, the government will face a difficult funding problem.

For now, though, there are few other places for them to turn. Even though yields on U.S. bonds have been pushed down close to historic lows, they are still higher than those attached to the paper issued by other governments around the world.

These days it’s becoming harder to find sovereign debt that even carries a positive yield. The latest estimates are that $14-$15 trillion in bonds carry negative yields.

It sounds crazy – bonds that obligate holders to pay interest to the issuing borrowers. But some economists think the negative interest rate syndrome could eventually infect the United States.

In the meantime, Treasury holders face the prospect of earning negative real returns. That is to say, the yields they earn are at grave risk of falling behind inflation.

The yield on the 10-year Treasury fell to 1.7% this week. That’s below the Fed’s target inflation rate of 2%. With Jerome Powell and other Fed policymakers endorsing “symmetric” inflation targeting, that means they may let inflation run well above 2% for some time in order to compensate for recent periods of below-2% price level increases.

The entire Treasury yield curve is at risk of falling into negative territory in real terms. It may have already… depending on which inflation gauge you use.

Fortunately for precious metals investors, gold and silver tend to thrive in an environment of negative real interest rates.

When real interest rates on paper turn negative, there no longer is an opportunity cost associated with holding gold. Metals become attractive to hold as alternatives to depreciating paper – and tend to perform well.

Gold and silver bugs certainly have reason to be optimistic. Prices have broken out of large consolidation bases ahead of near certain additional rate cuts from the Fed and a formal shift by the White House toward weak dollar policies.

The one missing piece of the bullish picture is rising inflation pressures. Although price increases are showing up in some areas of the economy, there is no broad inflationary momentum taking hold. It will likely take a sustained rise in energy and food commodity prices before inflation fears drive mainstream investors to exit their negative yielding bonds and seek protection in precious metals.

The upshot is that the current bull market phase in gold and silver is still very young. Before reaching maturity, it will suffer some setbacks. One may be due after this recent run up. But the upside potential ahead is far more positive than the yield on any government bond.