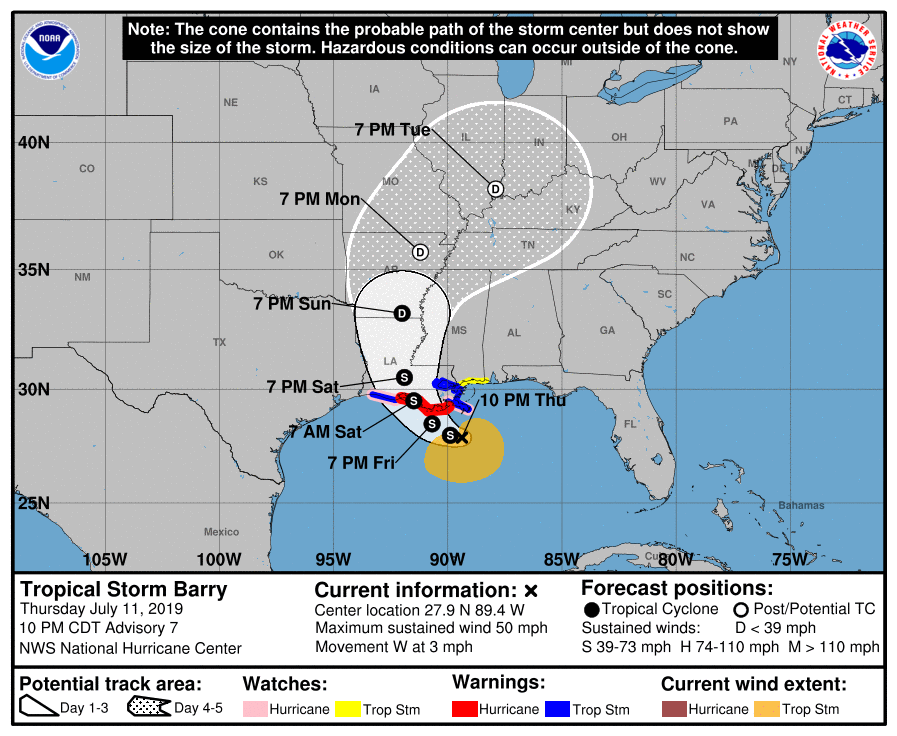 New Orleans is about to be hit by “an extreme rainfall event” that is likely to be the worst disaster that the city has seen since Hurricane Katrina.  It is being projected that Tropical Storm Barry could officially become a hurricane before it makes landfall on Saturday, but in this case the wind speed is not really that important.  Instead, the massive amount of rain that this immense storm will dump on southern Louisiana is the greatest danger, because the region is potentially facing flooding that is absolutely unprecedented.  In fact, one weather expert is even warning that the flooding could be so dramatic that it might actually “change the course of American history”…

Weather expert Eric Holthaus warned that, while the impending disaster would be “an entirely different type” of flooding than 2005’s Katrina, it could be just as harmful – and might even “change the course of American history.”

So why is there so much concern?

Well, the NOAA is now projecting that some portions of southern Louisiana could get up to 25 inches of rain from this storm…

The NOAA Weather Prediction Center (WPC) upped its rainfall forecast for Barry on Thursday afternoon, calling for a pocket of 20-25” amounts near Barry’s track between Thursday and Sunday evening. It’s very unusual for a NOAA/WPC forecast to depict amounts above 20”, which testifies to the center’s high confidence in this extreme rainfall event.

Many parts of New Orleans are already severely flooded, and if that amount of rain actually falls on the city over the next several days the water pumps are going to be completely overwhelmed.

In addition, this is the very first time that New Orleans has ever had to deal with a tropical system when water levels on the Mississippi River are this high.

According to CNN, the river is about 8 to 10 feet higher than it normally would be at this time of the year…

Tropical Storm Barry presents New Orleans with an unprecedented problem, according to the National Weather Service.

The Mississippi River, which is usually at 6 to 8 feet in midsummer in the Big Easy, is now at 16 feet, owing to record flooding that’s taken place this year all along the waterway.

Tropical Storm Barry is going to produce a substantial storm surge, and normally that wouldn’t be too much of a problem, but in this case it could push the water level in the Mississippi River above the levee system that protects New Orleans.  The following comes from the Daily Mail…

The center warned New Orleans residents that if the storm becomes a hurricane, it could potentially bring a coastal storm surge into the mouth of the Mississippi River capable of raising the river’s height to 20 feet above sea level – the highest crest in more than 90 years and high enough to overflow some sections of the levee system protecting the city.

We are being told that authorities have “great confidence” in the levee system, but we all remember what happened during Hurricane Katrina.

So basically New Orleans is facing a perfect recipe for flooding, and nobody is quite sure what is going to happen next.  Already, a state of emergency has been declared in five parishes…

States of emergency have been declared in Orleans, Jefferson, St. Bernard, Plaquemines and St. Charles parishes. Jefferson Parish and Plaquemines Parish have instituted mandatory evacuations as a precaution in low-lying areas or those outside major levees.

And at this point, we don’t have to wonder if there will be “catastrophic flooding” in New Orleans, because some parts of the city are already under “3 to 4 feet of water” thanks to all of the rain that has already fallen…

After Wednesday’s onslaught of heavy rain, Valerie Burton said her neighborhood looked like a lake outside her door.

“There was about 3 to 4 feet of water in the street, pouring onto the sidewalks and at my door,” Burton said. “I went to my neighbors to alert them and tell them to move their cars.”

Over the next few days things will get a lot worse for New Orleans.

The only question is how much worse.

And guess what?  Once the storm leaves southern Louisiana, it is expected to head north directly through the heartland of America.

Yes, the exact same area that has been relentlessly pounded by storm after storm for months.  We were already potentially facing widespread crop failures all across the middle portion of the country, and this massive storm is going to make things much worse.

According to the NOAA, the 12 months ending in June were the wettest 12 months in all of U.S. history…

Rain – and plenty of it – was the big weather story in June, adding to a record-breaking 12 months of precipitation for the contiguous U.S. It’s the third consecutive time in 2019 (April, May and June) the past 12-month precipitation record has hit an all-time high.

And now here in July an absolutely monstrous storm is going to rip through the middle of the country at the worst possible time.

The scenarios that I have been warning about are starting to develop right in front of our eyes, and many Americans are becoming extremely concerned about what the months ahead will bring.