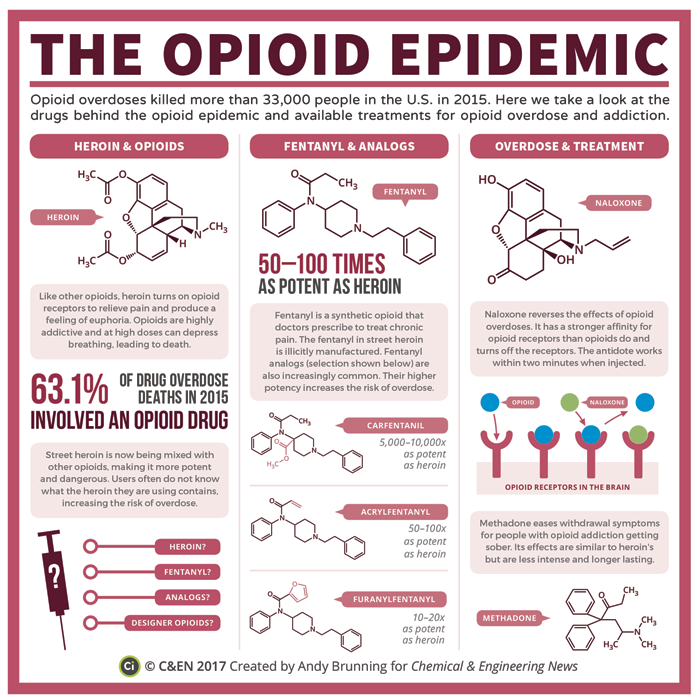 One cannot watch the news on television, follow the internet, or read a newspaper without being constantly reminded that our nation is facing an opioid addiction crisis. Statistical analysis indicates that the negative economic impact of this crisis is exponentially increasing as the abuse of opioids exponentially increases. How did we get here? What is being done to combat the problem?

What are opioids? Included in this class are the illegal drug heroin, legally prescribed drugs such as oxycodone, hydrocodone, codeine, morphine, fentanyl and others. The significant rise in use of synthetic opioids such as fentanyl, which is 80 to 100 times stronger than morphine, is a particularly disturbing trend. The growth of deaths due to non-prescription fentanyl, heroin, and synthetic opioids now account for 50% of all opioid fatalities. Opioids were intended to alleviate post-operative pain and pain from injuries. Unfortunately, they have proven to be highly addictive, and were easily accessible through legal prescriptions.

Altarum, a non-profit healthcare research organization estimates the economic impact of opioid overdose death as $800,000. From 2001 – 2017, the estimated cost of America’s opioid crisis exceeded $1 trillion. By 2020, the total estimated cost to our economy is $500 billion. This is echoed in an 11/17 report by the Council of Economic Advisers. Economic factors include increased healthcare costs (Medicaid, Medicare and private insurers), decreased tax revenue (federal, state, and local), increased cost to the criminal justice system and lost worker production.

The cost of impact on human lives cannot be estimated – for those who die, those who survive overdoses, and family/friends. Annually, 42,000 deaths are associated with opioid misuse. As of 2017, drug overdose became the leading cause of death for Americans under age 50. 115 Americans die from opioids on a daily basis.

Individuals who have mental health issues such as anxiety and depression are more prone to become addicted to opioids. 16% of Americans are diagnosed with mental health issues, but they receive 50% of opioid prescriptions. A 2016 study reported that 10% of individuals who were prescribed opioids developed depression within a month of their use. Self-medication to escape depression/anxiety is an unfortunate element of this epidemic.

Practical efforts to help control the opioid epidemic include increased use of Naloxone. This drug has a 93% successful overdose reversal rate. Medication-Assisted Treatment (MAT), combines mental health treatment/therapies and drug treatment components such as methadone and buprenorphine. Unfortunately, costs for Naloxone have skyrocketed due to supply/demand and a shortage of approved MAT providers exists due to certification requirements. The recognition of the need to combine mental health treatment with authorized/controlled pharmaceutical intervention is a definite step in the right direction.

The opioid crisis is recognized as a national by our politicians. In 2016, Congress passed the Comprehensive Addiction and Recovery Act (CARA). This focuses on (1) Prevention; (2) Treatment (3) Recovery (4) Law Enforcement, (5) Criminal Justice Reform, and (6) Overdose. This act authorized $181 million for prevention and treatment programs. Through CARA, the Substance Abuse and Mental Health Services Administration (SAMHSA) provided 2.6 million in grants for community organizations to establish recovery networks and promote opioid education programs.

In October of 2017, the opioid crisis was declared a national public health emergency by President Trump. This was followed by the Initiative to Stop Opioid Abuse in 2018. This proposes to reduce the over prescribing of opioids, restrict the flow of international/domestic drugs into our communities, and provide support for those individuals struggling with addiction through treatment and recovery services.

In November 2017, Kellyanne Conway was announced as the president’s choice to lead the White House’s opioid crisis efforts. A close friend and political adviser of the president, Kellyanne Conway, however, has no experience in drug policy or enforcement. One must wonder then, how serious is the White House about implementing positive, effective change in the opioid crisis by this “Drug Czar” appointment? She leads an “opioid cabinet” of political appointees who have no more experience with opioid issues than she does. Americans have seen this before: remember the “War on Poverty” and the “War on Drugs?” How did those turn out? If our nation’s opioid crisis is going to be brought under control, the situation demands effective and professional leadership.