Sometimes an otherwise-forgettable movie will be lifted up out of obscurity by the internet and made into a useful meme.

In the movie Zoolander Will Ferrell’s character, ‘Jacobim Mugatu,’ screams the line “I feel like I’m taking crazy pills!” because it seems nobody else sees what he does.

I have that feeling nearly every day now. And it’s getting more frequent and intense.

To the point where, some days, it feels like I’m in danger of overdosing on crazy pills.

Financial bubbles happen. History is full of them.  It’s just that they’re just not supposed to happen more than once a generation.

How can so many people have completely forgotten the painful lessons of not one, but two, recent bubbles?

The bursting of the DotCom bubble in 2000 was traumatic.  “Eyeballs” were favored for a time over “earnings.” But then investors woke up to the fact that all of their rationalizations for the sky-high valuations of profitless companies were actually ridiculous.

But here we go, again, less than 20 years after the DotCom bubble (and only 10 years post-subprime bubble — both far less than a full generation later to allow the keepers of the memories a chance to die off) with exactly the same dynamic at play: 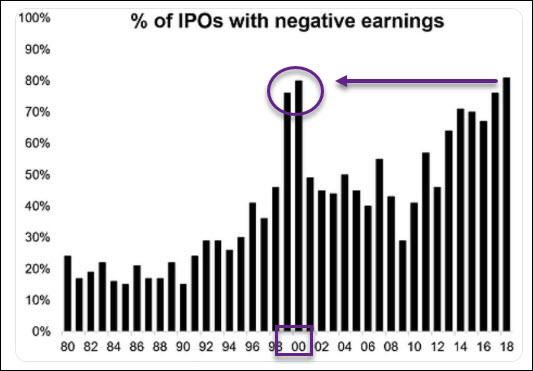 In the pre-financialization era that ended a few decades ago, a more normal mix would have been roughly 15% of IPOs with negative earnings.  Today it’s nearly 80%.

By way of example, let’s look at Uber and Lyft.  Both companies aren’t just unprofitable, but wildly so.  The more these companies make in revenue, the greater the accompanying losses: 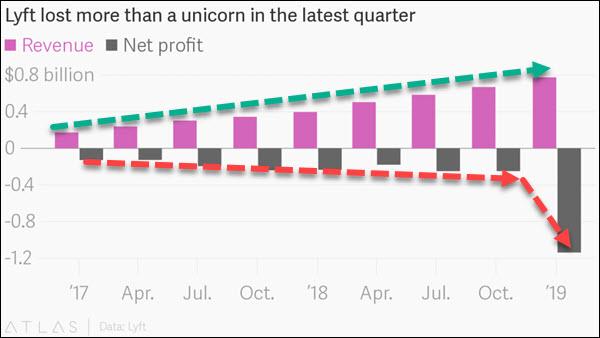 This is the very essence of a broken business model. It’s no different – literally, exactly the same – as a circa-1999 DotCom losing gobs of money on a pie-in-the-sky business scheme that sounded great but didn’t actually work.

No matter to Lyft’s stock price, though, as the market (or ““market”” as I refer to it because it’s so deformed it needs double quote marks to signify that condition) now values this cash-burning furnace at $18.9 billion: 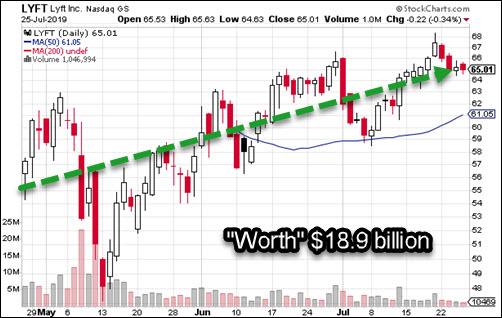 Lyft’s stock price just keeps going higher, no matter the losses. One can only imagine how much higher it will explode if Lyft manages to somehow turn in slightly-less-than-negative-as-last-time earnings next quarter.

What matters during an asset price bubble is not the rational, but the rationalizations.  Uber and Lyft are “transforming transportation” and “reducing urban congestion” even though taxis already existed and there’s zero evidence of the latter.

Wolf Richter said it very well in a recent piece:

Anything goes: story stocks, momentum stocks, hyperventilation stocks, consensual hallucination stocks, and financial engineering stocks that generate mind-boggling share prices that give these companies incomprehensible market capitalizations, and the mere mention of “fundamentals” gets naysayers ridiculed and thrown out.

The full quote that goes with the meme is “Doesn’t anyone notice this?!? I feel like I’m taking crazy pills!!”

How can people not notice what’s going on? 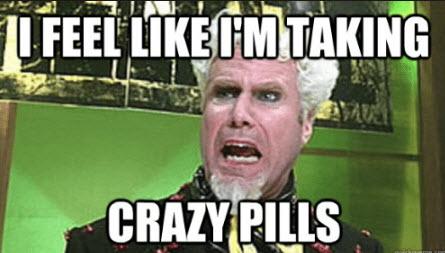 I keep reading articles where hapless financial journalists try earnestly to make sense of a world that is now senseless.

It must be terribly frustrating to see the impact the central bank bubble is having on distorting the markets, but your editors disallow you to point any of that out to your readers.

A recent WSJ article noted that investors poured money into bond funds at a record pace in the first half of 2019. It then went on to explain this as a sign that investors might be cautious about the economy.

Sure, that’s probably a fair conclusion during normal times. But not when crazy pills are being served buffet-style by the world’s central banks.

Instead, we have to note that the world now has a whopping $13.7 trillion in negative yielding bonds – meaning record high bond prices – and negative earning IPOs both existing simultaneously.

When investors are cautious, they move money out of stocks and into bonds.  That’s what the journalist was grasping for, but that’s not what’s happening now.  Money is flooding into both stocks and bonds.  It’s concurrently a risk-on and a risk-off environment — which means its actually neither.

A magnificently-deformed time of monetary excesses.

We’re currently witnessing a massive blow-off top that will end in something quite akin to the Dark Ages – a time of systemic breakdown when we’ll be lucky to preserve the pinnacles of our current technological achievements.  But let’s save that idea for later.

To make the “Bubble!” claim more concrete, let me burrow in a bit.  Switzerland’s government bond market will serve nicely as a case in point:

Pick any Swiss bond of any maturity and you’ll have to pay the Swiss government for the luxury of lending it money.

Heck, even if the bond was paying 0% vs. a negative amount, that would mean that your money has no value.  You give an entity your money and they give you back exactly the same amount 50 years later.

But with negative interest rates, you’re getting even less than that back.

I could possibly make sense of that if we knew that the amount of circulating money was going to fall over time, so there were fewer claims against more ‘things’ over time.  That is, deflation.

But we’re in the exact opposite world with global central banks easing like mad at the moment and promising even more.  Rate cuts. And more QE. And making serious comments about maybe buying equities directly.  Or maybe just print up money and distribute it via MMT.  The central banks have promised in word and deed that they’ll do whatever it takes!

Against that backdrop, what can we make of the hundreds and thousands of individual “investors” that are actually buying the Swiss 50-year bond at a negative yield of -0.014%?

If they hold that bond to maturity, they’re going to get less money back than they put in AND the purchasing power of that money is going to be seriously diminished. What sane person would make that deal?

Again, doesn’t anybody notice this?

By far the largest crazy pill I am taking, a horse-sized one that feels larger than my throat, concerns the serious consequences with society’s addiction to perpetual economic growth.

That’s what we’ve got now.

There’s nothing wrong with growth per se. But if it becomes the mission instead of the strategy, then it’s cancerous and self-destructive.

Virtually nobody in power ever questions the “need” for economic growth.  It’s a universally understood imperative, especially among the banking class.

Despite already having supremely frothy stock prices and negative bond yields that require mega-doses of crazy pills to even contemplate, the world’s central banks are desperately scrambling to justify easing more — to drive stock and bond prices to even frothier heights.

And for what exactly?  What’s so urgent, right here and now, about getting even more growth?