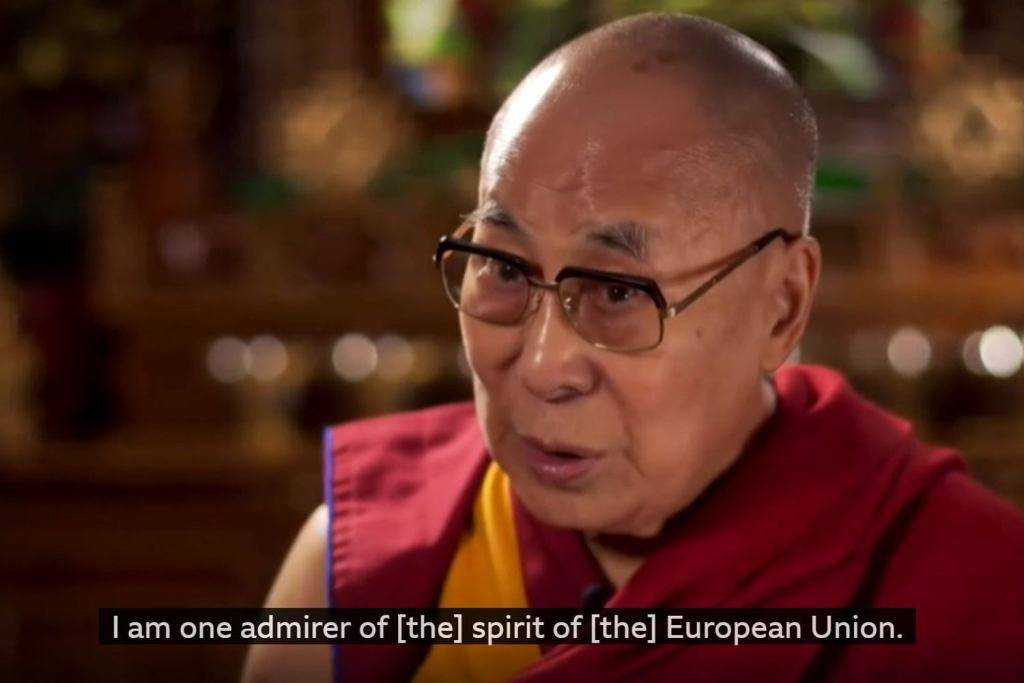 In September 2018 Tibetan spiritual leader, the Dalai Lama, sent many leftist-liberal deviants into meltdown mode by stating that Europe belongs to Europeans and that refugees should return to their home countries in order to rebuild them.

It was a fantastic quote because usually when people say things like this, they are called a racist or a Nazi or a white supremacist.

But the Dalai Lama is a wise, much-respected man, who has dedicated his life towards helping humanity. He won the Nobel Peace Prize in 1989 for being A Buddhist Advocate for Peace and Freedom, and here he was, saying that Europe belongs to Europeans.

The interview wasn’t without controversy. I asked the @DalaiLama about his previous comments on refugees and migration where he’d said “Europe is for Europeans”. One of quotes on the topic was even used in posters by the #leave campaign. His answer was surprising. Watch it here: pic.twitter.com/Ua0UVHOOhA

There were quite a few left-wing types who tied themselves in knots while trying to string together a response. Fail: The majority of level-headed people, however, responded by saying something along the lines of “The Dalai Lama seems like a reasonable guy. Maybe that’s a reasonable suggestion too.”

The British Bias Corporation (BBC) were clearly displeased with what the Dalai Lama had said due to the fact that they chose not to report on it. The only article the BBC did publish during his September 2018 European tour was an article about him meeting some alleged victims of religious abuse.

More recently, the Dalai Lama was interviewed by BBC Correspondent, Rajini Vaidyanathan, who couldn’t wait to quiz him on his “controversial” comments. The Dalai Lama was impudently quizzed by the BBC’s sanctimonious presenter about his comments on refugees and migration where he’d said Europe is for Europeans. His answer was surprising. The Dalai Lama only went and doubled down; the absolute legend that he is.

According to the BBC, the Dalai Lama gave the wrong answer. Vaidyanathan tweeted after her interview that she found the idea of Europe being for Europeans controversial and she found the Dalai Lama’s answer “surprising”. How detached must you be from reality and majority thinking to find the idea of Europe remaining European controversial? Or morally corrupt.

Ethnic-Europeans and indeed all ethnic groups who value their culture were taken aback at the nerve of her question: “There’s nothing wrong with (Europe) becoming African or Muslim, is there? You yourself are a refugee.”

It turns out that Rajini Vaidyanathan isn’t a multicultural-fetishist after all. Or perhaps she is, but only for other people’s homes. Vaidyanathan wrote an article for the BBC in 2011 called “Why I came ‘home’ to India”, in which she revealed that, even though she was born in England, she always “felt a strong connection to India and its culture and customs.”

After a trip to India when she was 10-years-old, a place that she describes as her “motherland”, she recalls landing back in Heathrow, London, with her father: “I recall landing back at Heathrow, holding my dad’s hand as we walked through immigration. “Dad, I have just realised that everyone looks different again.”, a place where everyone had the same skin tone and cultural mannerisms, continued to bug me. He laughed, but the naïve realisation that I also ‘belonged’ somewhere else