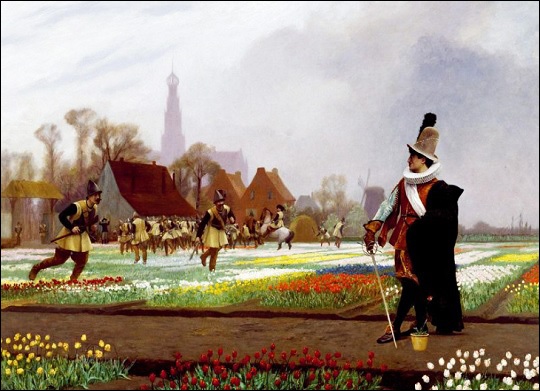 In her 2007 book, Tulipmania: Money, Honor, and Knowledge in the Dutch Golden Age, Anne Goldgar writes that “the f1000 one might pay in January 1637 for one hypothetical Admirael van der Eyck bulb,” could have bought “a modest house in Haarlem,” or “nearly three years’ wages” of a master carpenter. Comparing that to U.S. dollars in 2007, the year her book was released, Goldgar says it would be like one tulip bulb selling for $12,000.

Goldgar notes that as historians have looked back, the tulip mania of the 1630s in Holland has become a “byword for idiocy.”  She quotes from a passage written in 1648 by the historian Theodorus Schrevelius: “I don’t know what kind of angry spirit was called up from Hell…Our Descendants doubtless will laugh at the human insanity of our Age, that in our times the Tulip-flowers have been so revered.”

In his 1841 classic on market bubbles, Extraordinary Popular Delusions and the Madness of Crowds, the Scottish journalist Charles Mackay writes this about the tulip mania in Holland: “The rage among the Dutch to possess them was so great that the ordinary industry of the country was neglected…”

Compare that era to America circa 2019 and this April 14 Tweet from Donald Trump:

“If the Fed had done its job properly, which it has not, the Stock Market would have been up 5000 to 10,000 additional points…”

The sitting President of the United States now sees it as his job to boost the stock market, even as critically-needed legislation for rebuilding the nation’s crumbling infrastructure falls by the wayside.

Evidence of a tulip mania mentality in broad segments of American society abounds in abundance today.

We have the equivalent of a rare tulip bulb called Bitcoin, a so-called cryptocurrency, which is intrinsically backed by thin air, trading for over $11,000 a coin – very similar to the rare tulip bulb before the tulip crash of 1637.

A surveillance company in drag as a social media company, Facebook, has a market value of more than half a trillion dollars and has announced that it’s going to issue its own cryptocurrency called Libra.

The United States has a stock market that no longer values “values.” It rewards criminal conduct. Consider the stock price of JPMorgan Chase, the biggest bank in the U.S. and the biggest player on Wall Street. The bank pleaded guilty to three criminal felony counts in 2014 and 2015. Its share price since then has risen from $60 to yesterday’s close of $108.66.

The same Wall Street banks that collapsed the U.S. economy a decade ago in a hybrid form of a tulip bubble called subprime mortgage backed securities, are today allowed by their regulators to run their own secret stock exchanges called Dark Pools, where they are also allowed to trade the shares of their own bank stock as well as companies they brought to the public markets without any earnings history. To pump up the value of these stocks, the same banks are allowed to shill for the companies by issuing “buy” recommendations, which are then duly transmitted to the public by the tens of thousands of stockbrokers (called financial advisors) that are employed by these same banks.

When a journalist contacts one of the Federal regulators overseeing this madness on Wall Street today, this is the typical response: “On background only, with no attribution to anyone at the (fill in name of regulator) we have no knowledge of (topic) and suggest that you contact (name of Wall Street bank you’re inquiring about).”