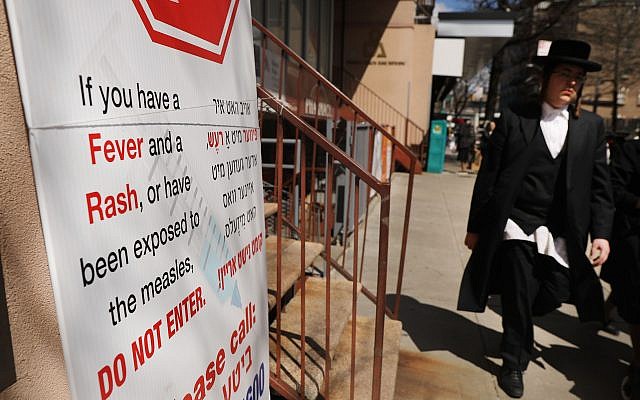 New York City is shuttering an Orthodox school in Brooklyn because it has continued to admit unvaccinated students in violation of a city order.

The Central UTA Satmar School for Boys, a Hasidic school in the Williamsburg neighborhood, will be closed Tuesday afternoon for violating the stipulations regarding vaccines and vaccination records, the Jewish Telegraphic Agency has learned. It is the 10th Orthodox school in New York City to be closed this year due to the issue, according to a city official with knowledge of the matter.

Williamsburg, which has a large Orthodox population, has been experiencing a measles outbreak since last year that has infected 588 people in New York City. Almost three quarters of those cases have occurred in Williamsburg. The city says the outbreak is largely concentrated in the Orthodox community.

In April, the city declared a public health emergency over the outbreak, mandating people in four Williamsburg Zip codes to vaccinate. The city also announced it would be closing schools in Williamsburg that allow unvaccinated students to attend. Nine of the 10 schools closed thus far are in Williamsburg. The 10th is in the borough of Queens.

In addition, in the past week, the city has issued summonses to 173 people for not complying with the public health emergency order, 68 of whom ended up receiving vaccines or providing proof of immunization.