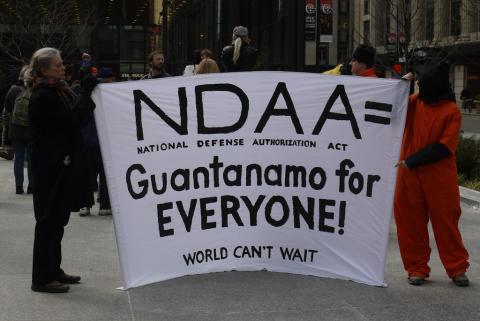 If a nation expects to be ignorant and free, in a state of civilization, it expects what never was and never will be.”

If the men were still men, in this country, we would be standing, side by side at the border, screening every immigrant for criminal background, health and assessing their individual merits to contribute to our society. We’d also be making every immigrant to follow the rule of law before entering our country. But we do nothing, just like the people of Nazi Germany, the people of the former Soviet Union and the people of Communist China, who did nothing to stop the tyranny of their government and the overt forsaking of their country by their leaders. And just as we witnessed in these three cultures, we are going to be the 4th Reich and our people are going to suffer a similar fate. History is a great teacher, however, one has to know history in order to learn from it and our “dumbed down” country has lost any collective sense of who we were, and we collectively understand less about where we are being taken. And where we are being taken to a very dark place in history.

Whether it is the Nazi Enabling Act of the National Defense Authorization Act (NDAA), it is all the same. It is just abject tyranny, and eventually genocide, by a different name. Almost 30 months into the Trump presidency and we still have the NDAA on the books as the law of the land, tells me all I need to know about how compromised President Trump actually is.

The Enabling Act permitted the German cabinet to enact previously prohibited legislation, which included laws that clearly deviated from and profoundly altered the meaning of the German constitution. As with the corrupted and treasonous Bush’s and Obama’s, and now with Trump’s continued unconstitutional actions, the contemporary take over of our Republic is being accomplished.

Within the parameters of the Enabling Act, the Nazis created “Special Courts” to punish political dissent. At least the Germans went through the pretense of taking “political offenders” to court. In today’s America, our government doesn’t even have to go through the pretense of a trial to put you in  concentration camps and exterminate you and your entire family because your white, conservative, Christian, Black, Jewish, Southern Baptist, atheist, Libertarian, gay, straight, Latino, or whatever your group is. Your present government, the American government, has ways of dealing with you that make that Nazis look civilized by comparison.

About two years ago, I was attending a social event and was having dinner at my table and I was approached by 3 people and was asked if I was Dave Hodges of The Common Sense Show and when I admitted to this supposed transgression, I was met with “I am surprised because you seem like such a nice person and you appear to be so normal. Why do you try and scare everyone? Nothing you are saying is ever going to happen. The people would never permit it…”. I responded with the following statement that has become my rallying cry for all people who refuse to recognize the times that they are living in. And yes, like most tirades today, it was recorded and then later deleted. Here was my greatest moment of either insanity or lucidity. Your level of awareness will determine your response to the following.

“The people would not permit tyranny? Hell, the people don’t even know that they live under tyranny and for all intents and purposes, our rights are already gone! My people perish because of a lack of knowledge. On my father’s side, I come from a family that escaped the early days of totalitarianism in Germany. I not only have learned the lessons of history from my days as an undergraduate student, but I also learned the lessons of history from my grandmother and my aunt. They taught me how tyranny progresses. And this satanic tyranny has come to our land. Do you know what the NDAA is? It is property confiscation without due process of law as prescribed by the 5th Amendment. It is imprisonment without trial. It is illegal search and seizure, supposedly prevented by the 4th Amendment. It is extermination of an entire “kind”, any kind, without due process of law. It is the elimination of 1st Amendment protections for religion, free speech and the right to peaceably assemble. This law has been on the books since 2011, passed by Congress and the fact that you know nothing about it, tells me all I need to know about your ignorance regarding the direction that this government is being taken. If Trump allows this law to remain in place, he will go down as the biggest “Fake President” in American history. America cannot be great again as long as we live under this law that is so severely undermining of our Constitution. Your ignorance, like so many of your kind that only want to bury your head in the sand, like so many of your cowardly types, constitutes a clear and present danger to the continuance of this country. So, excuse me if I offend your sensibilities, but either help me to save our country from being the next Nazi Germany, or get the hell out of the way!!!”

I watched the recording  on Youtube and transcribed it to protect myself from embellishment of what i said. I can no longer find it. However,  I freely admit that this was not my best personal moment of civility, but it may have been my best moment as an American who is willing to defend our culture, our children’s future by protecting our civil rights. Your level awareness of the current state of affairs that we find ourselves in, will determine how you would interpret and respond to my “tirade”. By the way, the lady that verbally accosted me was in tears by the time I was finished (not my intent), and one of her companions told me where to go and what to do when I got there.

For the record, in 2011, Obama sponsored the NDAA which permits arrest without any due process. But it wasn’t just Obama, Congress had to pass this Nazi-type of legislation. Our rights are ordained by God, but on this day, they were taken by men and women, very evil and corrupt men and women. The NDAA permits property confiscation without due process. The NDAA can take your guns, an historical precursor to genocide without due process.  Also contained in the Enabling Act was a series of civil laws that barred Jews from holding civil service positions as well as jobs in the legal, medical and teaching professions. Today, people are losing their jobs in the same manner as they  being fired for being conservative, or Christian. Say hello to the modern version of the Salem Witch Trials, which will surely take place, if we do not take back control of our country from the Deep State and I see no hope of this happening given the current environment.