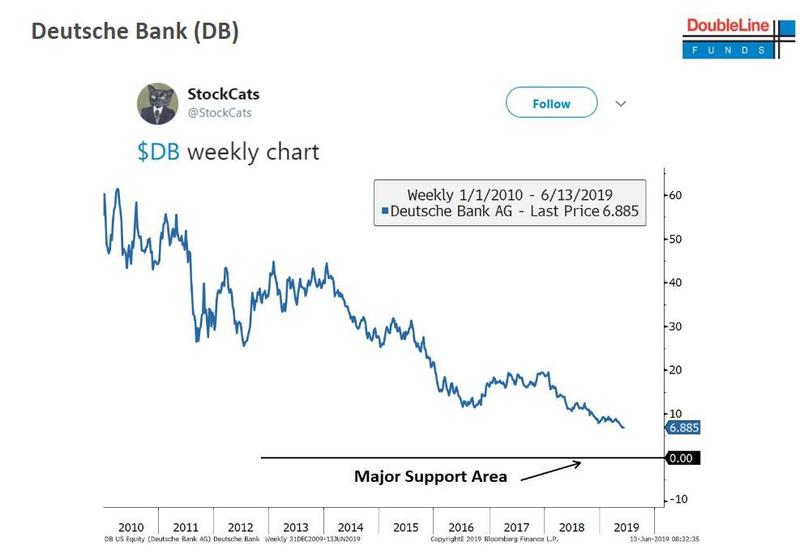 Just last week, Jeff Gundlach – in his latest DoubleLine investor call – cracked jokes that Deutsche Bank’s imploding stock, which has been hitting fresh all time lows virtually every day, has a major support area at €0.

Once again, he was on to something because now, just a few days later, the FT reports that the bank which was this close to nationalization in 2016, and failed to consummate a merger with that “other” German bank, Commerzbank, is preparing to roll out Plan Z: amid a deep overhaul of its trading operations (read: mass terminations), the biggest German lender is set to roll out a “bad bank” holding some €50 billion in toxic assets, in a plan that was quite popular in the depths of the global financial crisis.

Meanwhile, as part of CEO Christian Sewing’s ongoing restructuring of DB away from investment bank, “the bank’s equity and rates trading businesses oustide continental Europe will be severely shrunk or closed entirely as part of the revamp”, while managers are also set to unveil a new focus on transaction banking and private wealth management.

Of course, it will hardly come as a surprise that the German bank best known for housing €43.5 trillion in gross derivatives notional(something we first pointed out way back in 2013)…

According to the FT, the CEO will likely to announce the changes with the bank’s half-year results in late-July.

While the final scale of the bad bank has not been decided and the number “continues to oscillate”, executives are reportedly discussing at least €30bn of risk-weighted assets with an eventual size of €40bn to €50bn most likely, at the high end almost exactly 4 times greater than DB’s current market cap, and accounting for 14% of Deutsche’s balance sheet.

“The cuts need to be radical,” one senior banker told the FT. “It makes sense for us to put all these long-term, nil-revenue assets in a non-core unit.” The person added: “We now have the capital and liquidity freedom to do what needs to be done; we couldn’t have acted decisively much sooner because we needed to have built up those buffers.”

Recall that last April, IFRE reported that then CEO John Cryan “came clean” about a €60 billion portfolio of years-old trades that were costing the German lender about €500 million a year. Never previously disclosed, the revelation stunned analysts. Deutsche had done several clean-ups since the crisis – including one by Cryan just 17 months earlier – but had never mentioned the trades, some of which were over a decade old.

It got worse: although a relatively small piece of its balance sheet, which at the time stood at €1.6 trillion, the positions were consuming between €4bn and €5bn of equity – equivalent to 10% of the bank’s entire core equity Tier 1 capital base, and more than half the amount shareholders were being asked to cough up.

Worse still, Cryan admitted that some of the positions wouldn’t run off until after 2030, more than two decades after some were initially booked.  Christian Sewing, who was running Deutsche’s private and commercial bank and oversaw the failed efforts to spin off its Postbank subsidiary, said at the time: “We just want to create the transparency that these are things we are going to work out.”

Unfortunately, as of last April, and shortly after raising €8bn in a critical rights offering which Deutsche at the same said is all the funds it would need, the bank had not updated investors on the portfolio, other than to say late last year that it “continues to roll-off as planned”.

It now appears we know the fate of this €60 billion toxic derivative portfolio: it will be rolled up and into the “bad bank” of a bank many already call “bad” (so bad bank squared perhaps). While the derivatives destined for the non-core unit still provide some cash flow, all the profit on the deals — and therefore the associated bonuses for those who arranged them — were booked up-front.

Now that the bank is sitting on €260bn of cash and similarly liquid securities, it no longer relies on these assets for cashflow and can attempt to run them down or sell them to other banks with lower funding costs and capital pressures, or to private equity investors eager to scoop them up at a discount, one of the people said.

In response to the FT article, DB said in a statement: “Deutsche Bank is working on measures to accelerate its transformation so as to improve its sustainable profitability. We will update all stakeholders if and when required.”

Of course, DB’s derivative woes are just a small – if costly – part of the equation: once a Wall Street gem, Deutsche’s investment bank has weighed on earnings in recent years, and made losses in the past two quarters. Along with a series of fines for misconduct scandals, the poor performance of its core business has driven down the bank’s share price to the lowest in its 149-year history. Sentiment darkened in April when a long-rumoured merger with Commerzbank collapsed.

The lender is targeting a return on tangible equity — a measure of profitability — of at least 4 per cent this year, below most rivals. But it generated only a 1.3 per cent return in the first quarter. None of the analysts that cover the group forecast it can achieve its goal without major structural changes.

So why now? Deutsche Bank believes it can divest the assets without taking large hits to its profit or capital “because the long-dated interest rate derivatives are not toxic and have a predefined run-off plan”, an FT source said.

Of course, it is debatable whether a €60 billion derivative portfolio which is bleeding half a billion each year and will continue doing so for decades is “not toxic”, but we’ll leave that discussion for the semantic purists… and whoever is Germany’s Chancellor in a few months when the nationalization of Deutsche Bank is once again sprung upon the German government.