In his so-called manifesto, The Great Replacement: Towards a New Society, Tarrant, under the heading Why did you carry out the attack?, listed these reasons as grouped by me into two broad headings: revenge, incite action.

Since the shooting at Christchurch, details have come out about his life and his childhood. Two key details stick out to me. First, his parents divorced when he was young. Second, and perhaps even more important, his dad died of cancer at the age of 49. 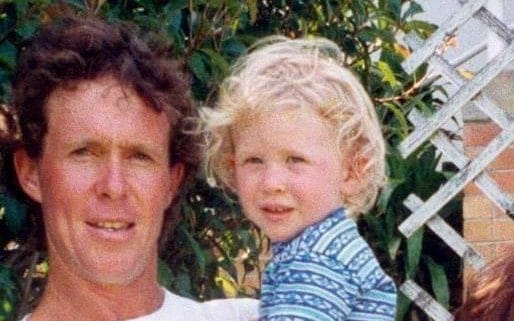 A third detail is this: Tarrant traveled extensively in Mohammadan countries, notably Turkey and Pakistan. It is reported by people from those countries, notably Pakistan, who had contact with Tarrant that Tarrant was congenial, proper and enjoyed the host people.

So, with these details, it seems that Tarrant developed a certain way of looking at reality, at filtering reality.

Tarrant seems to like the orderliness of when countries remain homogeneous, such as the Chinese and Japanese. He went so far as to praise the Chinese in his manifesto.

But when he sees a sudden influx of foreigners in lands of others, he sees this as a threat that leads to death if left untreated or poorly treated.

In short, the Mohammadan immigration of invasion of Europe, Australia, and New Zealand, which Tarrant had first hand experience, Tarrant viewed as a cancer, a cancer killing the hosts.  If this is true, then the trauma of losing his dad to cancer so shaped Tarrants worldview that he became driven to act.

It is telling that in Tarrant’s Go-Pro camera livestream of his shooting, he referred to the Mohammadans not as people but as “so many targets” must as a cancer surgeon would refer to cancer as so many masses.

It is clear too that he sees “Western society” diseased, or in current Internet parlance, “pozzed” with nihilistic, hedonistic behavior, which can be viewed as another form of cancer.

Tarrant made it a point to remark on the long ago 1990s era war in Kosovo where the US killed Christians, “slaughtered Christian Europeans” as Tarrant put it, in the name of Mohammadans,  whom he called “Islamic occupiers.”

For Tarrant while in Europe at the time, the Mohammadan terrorist attack in Stockholm was an especially triggering moment. To quote Tarrant from his manifesto:

“I could no longer turn my back on the violence. Something, this time, was different. That difference was Ebba Akerlund.

Young, innocent and dead Ebba. Ebba was walking to meet her mother after school, when she was murdered by an Islamic attacker, driving a stolen vehicle through the shopping promenade on which she was walking. Ebba was partially deaf, unable to hear the attacker coming. Ebba death at the hands of the invaders, the indignity of her violent demise and my inability to stop it broke through my own jaded cynicism like a sledgehammer. 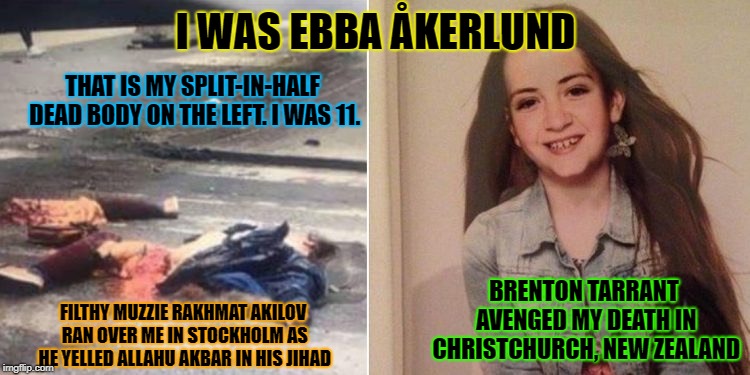 Tarrant states the second big push that triggered him is the collapse of France by its leaders appeasing Mohammadan immigrants.

“The final push was witnessing the state of French cities and towns. For many years I had been hearing and reading of the invasion of France by non-whites, many of these rumours and stories I believed to be exaggerations, created to push a political narrative.

I had seen enough, and in anger, drove out of the the town, refusing to stay any longer in the cursed place and headed on to the next town. Driving toward the next french town on my itinerary, knowing that inevitably the invaders would also been there, I found my emotions swinging between fuming rage and suffocating despair at the indignity of  the invasion of France, the pessimism of the french people, the loss of culture and identity and the farce of the political solutions offered.

The spell broke, why don’t I do something? Why not me? If not me, then who? Why them when I could do it myself?

Tarrant is complex. The unthinking controlled media of the master race will continue to spew propaganda about Tarrant, propaganda generated from low-grade intellects.

The Miniaturization of Media Dinosaurs