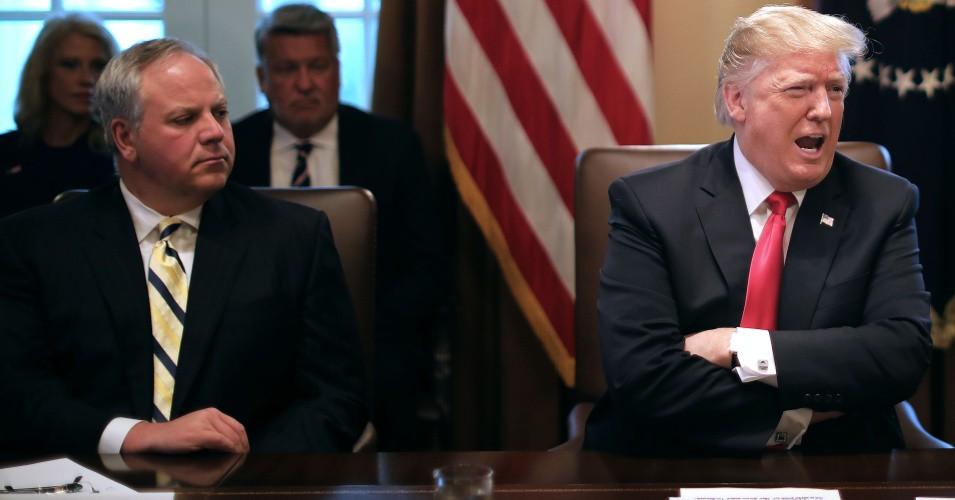 (CD) — A newly-leaked audio recording reveals that oil and gas executives in a private meeting were “giddy” with laughter in the summer of 2017 as they rejoiced over the “unprecedented access” they were being given to the highest levels of the Trump administration, boasting about their ability to have closed-door meetings with top officials and the ascendance of their own industry colleagues to some of the most powerful seats of government.

Among the topics in the recording, reports Reveal at the Center for Investigative Reporting—which was provided the audio—the oil and gas executives who belong to the Independent Petroleum Association of America (IPAA) “are heard discussing David Bernhardt, now deputy secretary of the Interior and a former industry lobbyist.” Notably, Bernhardt—described by the executives in the recording as a close friend and industry operative—has now been nominated by President Trump to be the next Secretary of Interior, with his confirmation hearings scheduled for next week.

Lance Williams, a senior reporter for Reveal, detailed the contents of the recorded June 2017 meeting, which took place inside a Ritz-Carlton hotel conference room in Southern California, with an extensive piece for Politico‘s weekend magazine publishedSaturday. Williams said the “recording gives a rare look behind the curtain of an influential oil industry lobbying group” congratulating itself on their political fortunes under a friendly administration.

Dan Naatz, the association’s political director, told the conference room audience of about 100 executives that Bernhardt’s new role meant their priorities would be heard at the highest levels of Interior.

“We know him very well, and we have direct access to him, have conversations with him about issues ranging from federal land access to endangered species, to a lot of issues,” Naatz said, according to an hourlong recording…

To a room full of laughter, IPAA’s CEO Barry Russell in the recording described one meeting with Scott Pruitt, the president’s EPA administrator at the time. What was expected to be a simple meet-and-greet, Russell explained, quickly became a friendly opportunity for the fellow industry insiders to provide Pruitt with a wish list for deregulation and agency rule changes. “What was really great is there was about four or five EPA staffers there, who were all like, ‘Write that down, write that down,’ all the way through this,” Russell stated. “And when we left, I said that was just our overview.”

Russell, with the room reportedly still laughing, subsequently bragged: “It’s really a new world for us and very, very helpful.”

Specifically, the IPAA and other allies were holding meetings during that period with the Interior Department, the EPA, and other agencies to reduce regulations on fracking, public lands restoration, methane restrictions, and species protection. From Politico:

At the meeting, the association’s leaders distributed a private “regulatory update” memo that detailed environmental laws and rules that it hoped to blunt or overturn. The group ultimately got its way on four of the five high-profile issues that topped its wish list.

Trump himself was a driving force behind deregulating the energy industry, ordering the government in 2017 to weed out federal rules “that unnecessarily encumber energy production.” In a 2017 order, Zinke called for his deputy secretary—Bernhardt—to make sure the department complied with Trump’s regulatory rollbacks.

The leaked recording comes in the wake of reporting by journalist Andrew Perez of Maplight on Friday revealed that Bernhardt and the lobbying firm he once worked for, Brownstein Hyatt Farber Schreck, have donated almost a million dollars over the last five years to the very senators who will soon vote on his confirmation.

A MapLight review of campaign finance data found that Bernhardt, Brownstein Hyatt employees and the firm’s political action committee contributed more than $225,000 to members of the Senate Energy and Natural Resources Committee between 2013 and 2018. The panel will hold a hearing on his nomination next week.

The firm and its employees also donated more than $960,000 to current members of the Senate, who will cast the final vote on Bernhardt’s confirmation.

Colorado’s senators, Democrat Michael Bennet and Republican Cory Gardner, were the top recipients of cash from Brownstein Hyatt, which has a major lobbying presence in Denver. The third-biggest haul went to Senate Majority Leader Mitch McConnell, R-Ky. Bennet voted to confirm Bernhardt as deputy secretary but has announced he will oppose his nomination to lead the agency.

Asked to comment on the audio recording of the IPAA meeting, Nada Culver, senior counsel for the Wilderness Society, told Politico that the lobby group’s access ultimately resulted in attaining much of what it wanted from the Trump administration. “The IPAA’s wish list was granted as asked, in the executive order, and in the actions taken by the Department of the Interior,” Culver said. “It pains me to say it.”

With Bernhardt’s confirmation hearing set for next week, environmental groups are rallying constituents to call their senators to reject the nominee.

David Bernhardt used to lobby for oil & gas — and now his former clients are getting rushed drilling approvals with Bernhardt at the helm of @Interior.#StopBernhardthttps://t.co/OeltH5fSHr

My Resignation From The Intercept