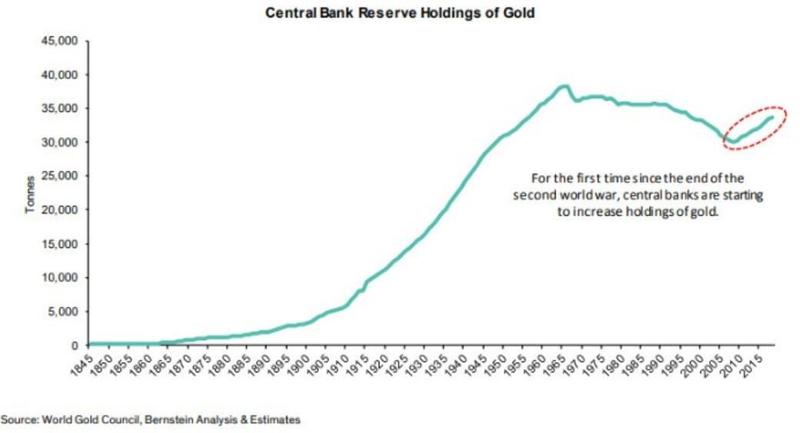 After China’s official gold reserves rose for the first time in around two years (since Oct 2016) in December, Beijing appears to have joined the global gold rush, increasing its gold reserves for the third month in a row in February to 60.26 million ounces.

As we previously noted, China has long been silent on its holdings of gold as many countries are turning away from the greenback. 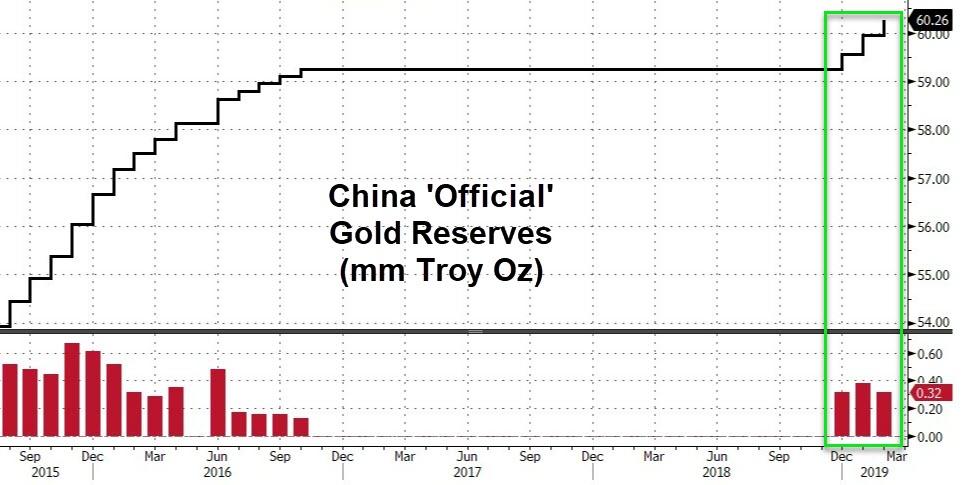 The value the country’s holdings of the precious metal reached US$79.5 billion, increasing by more than $3 billion compared to the end of last year.

Goldman Sachs has flagged central-bank buying as a plank supporting its bullish outlook for gold, which it expects to rally to $1,400 an ounce over six months.

Just as we saw in 2015/2016, it appears China is reducing its US Treasury exposure as it increases its gold holdings…

When even the pro-Tesla crowd at electrek  the company’s sales strategy transition as “chaotic”, you know there’s real…

Last month’s inflow of 9.95 tons follows the addition of 11.8 tons in January and 9.95 tons in December. Should China continue to accumulate bullion at that pace over 2019, it may end the year as the top buyer after Russia, which added 274.3 tons in 2018.

After months of seeming stability in the yuan relative to gold, Q4 2018/Q1 2019 saw China seemingly allow gold to appreciate relative to the yuan (although the last week or so has seen Yuan strengthen against gold)

One wonders if Alasdair Macleod is on to something when he notes that if the yuan is to replace the dollar for China’s trade, officials will have to back it with gold…

It is hard to see how the US can match a sound-money plan from China. Furthermore, the US Government’s finances are already in very poor shape and a return to sound money would require a reduction in government spending that all observers can agree is politically impossible. This is not a problem the Chinese government faces, and the purpose of a gold-linked jumbo bond is not so much to raise funds; rather it is to seal a price relationship between the yuan and gold.

Whether China implements the plan suggested herein or not, one thing is for sure: the next credit crisis will happen, and it will have a major impact on all nations operating with fiat money systems. The interest rate question, because of the mountains of debt owed by governments and consumers, will have to be addressed, with nearly all Western economies irretrievably ensnared in a debt trap. The hurdles faced in moving to a sound monetary policy appear to be simply too daunting to be addressed.

Ultimately, a return to sound money is a solution that will do less damage than fiat currencies losing their purchasing power at an accelerating pace. Think Venezuela, and how sound money would solve her problems. But that path is blocked by a sink-hole that threatens to swallow up whole governments. Trying to buy time by throwing yet more money at an economy suffering a credit crisis will only destroy the currency. The tactic worked during the Lehman crisis, but it was a close-run thing. It is unlikely to work again.

Because China’s economy has had its debt expansion of the last ten years mostly aimed at production, if she fails to act soon she faces an old-fashioned slump with industries going bust and unemployment rocketing. China offers very limited welfare, and without Maoist-style suppression, faces the prospect of not only the state’s plans going awry, but discontent and rebellion developing among the masses.

For China, a gold-exchange yuan standard is now the only way out. She will also need to firmly deny what Western universities have been teaching her brightest students. But if she acts early and decisively, China will be the one left standing when the dust settles, and the rest of us in our fiat-financed welfare states will left chewing the dirt of our unsound currencies.

Is China’s “signal” an explicit warning of the end to the dollar era that has existed since August 1971, when gold as the ultimate money was driven out of the monetary system. 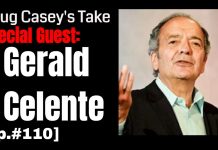