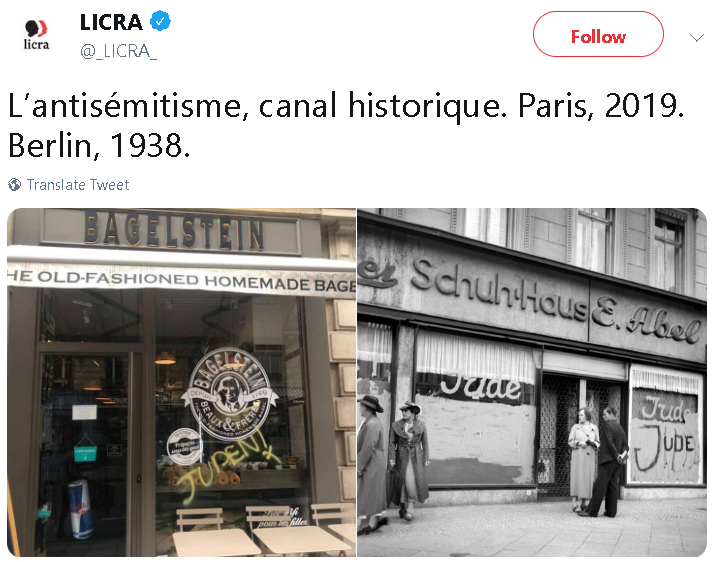 46% of the Gilets Jaunes agree with the proposition that:

“immigration is organised deliberately by our political, intellectual and media elites to bring about the replacement of the European population with an immigrant population”

This is 21% more than the population at large.

The more hardcore the Gilets Jaunes are, the more likely they are to believe this.

59% of Gilets Jaunes who have participated in street actions directly, compared to 40% who have only displayed a gilet jaune (yellow jacket) in their car, agree with the proposition.

“There is a Zionist conspiracy on a global scale”

44% of people who call themselves Gilets Jaunes believe there is a Zionist conspiracy at a global level, compared to “only” 22% in the general population.

41% of Gilets Jaunes think the Illuminati is a secret organisation that tries to manipulate the population.

Over the weekend, tragedy struck. No, not someone losing their hand, although that also happened. Something far, far worse than that, at least if we are to judge by the severity of the reaction in the French ruling class.

The window of a Jewish bagel shop had the word “Juden” sprayed on it in yellow letters. Massive governmental resources are now being deployed to bring the perpetrator of this atrocity to justice, although some have declared that it could be a false flag, another in the long line of fake “hate crimes” that are, in reality, authentic hate crimes, targeting white people by attempting to discredit any public expression of their feelings or interests.

The CRIF (Representative Council of the Jewish Institutions of France) declared that this window pogrom “recalled the darkest hours of History”. Another Jew-spawned organisation, LICRA, quickly joined in the denunciation of this tragic spraying event, this hate spray, for which, clearly, there can be no place in France.

The fact that political, intellectual and media elites instantly launch a chorus of global execration in response to the simple spraying of a word on a shop window of course in no way confirms the Gilets Jaunes’s belief that there is a “Zionist conspiracy on a global scale” or that “political, intellectual and media elites” are plotting against the indigenous peoples of Europe. Perish the thought. That the conspiratorial beliefs of the protesters and the observable actions of the ruling class match so perfectly can be nothing but an extraordinary Cohencidence.