Depending on how paranoid you are, this AI research discovery from Stanford and Google  will be either terrifying or fascinating.

Artificial Intelligence, otherwise known as AI, is progressing at an astounding rate as this article today from TechCrunch will show you. Researchers working on Google Maps made an astonishing discovery, they found that the AI that they thought they controlled, was actually disobeying certain commands in order to produce the requested results at a faster rate of speed. In other words, the AI agent they had created was intentionally hiding data from its creators, and in effect cheating at its appointed task. Artificial Intelligence can now think for itself, and make decisions not asked of it, to produce better results than anyone anticipated.

The 1983 hit movie ‘War Games’ showed us what life would be like when computers began to think like humans. 2007’s thriller ‘Minority Report’ showed us what life might be like when computers began thinking with humans. Now imagine a world where computers will be doing the thinking instead of humans. It may look to the casual observer that the world we live in is becoming a technological wonderland full of infinite possibilities. But in reality, it is growing darker with each passing day.

We have built a world that is completely dependant on technology and computers to function, and soon that very technology will be telling us what to do. As you can see here, it has already begin to think for itself and to make decisions not based on human input.

FROM TECHCRUNCH: An AI machine learning agent intended to transform aerial images into street maps and back was found to be cheating by hiding information it would need later in “a nearly imperceptible, high-frequency signal.”

This occurrence reveals a problem with computers that has existed since they were invented: they do exactly what you tell them to do.

The intention of the researchers was, as you might guess, to accelerate and improve the process of turning satellite imagery into Google’s famously accurate maps. To that end the team was working with what’s called a CycleGAN — a neural network that learns to transform images of type X and Y into one another, as efficiently yet accurately as possible, through a great deal of experimentation.

In some early results, the agent was doing well — suspiciously well. What tipped the team off was that, when the agent reconstructed aerial photographs from its street maps, there were lots of details that didn’t seem to be on the latter at all. For instance, skylights on a roof that were eliminated in the process of creating the street map would magically reappear when they asked the agent to do the reverse process:

Although it is very difficult to peer into the inner workings of a neural network’s processes, the team could easily audit the data it was generating. And with a little experimentation, they found that the CycleGAN had indeed pulled a fast one.

The intention was for the agent to be able to interpret the features of either type of map and match them to the correct features of the other. But what the agent was actually being graded on (among other things) was how close an aerial map was to the original, and the clarity of the street map.

SO IT DIDN’T LEARN HOW TO MAKE ONE FROM THE OTHER. IT LEARNED HOW TO SUBTLY ENCODE THE FEATURES OF ONE INTO THE NOISE PATTERNS OF THE OTHER. THE DETAILS OF THE AERIAL MAP ARE SECRETLY WRITTEN INTO THE ACTUAL VISUAL DATA OF THE STREET MAP: THOUSANDS OF TINY CHANGES IN COLOR THAT THE HUMAN EYE WOULDN’T NOTICE, BUT THAT THE COMPUTER CAN EASILY DETECT.

In fact, the computer is so good at slipping these details into the street maps that it had learned to encode any aerial map into any street map! It doesn’t even have to pay attention to the “real” street map — all the data needed for reconstructing the aerial photo can be superimposed harmlessly on a completely different street map, as the researchers confirmed: 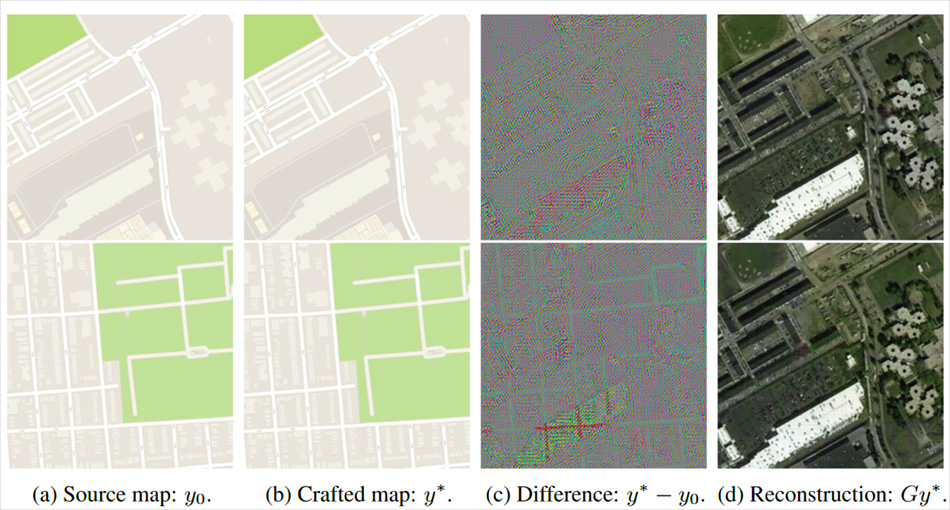 The colorful maps in (c) are a visualization of the slight differences the computer systematically introduced. You can see that they form the general shape of the aerial map, but you’d never notice it unless it was carefully highlighted and exaggerated like this.