FIVE WEEKS AGO, The Guardian published one of the most extraordinary and significant bombshells in the now two-plus-year-old Trump-Russia saga. “Donald Trump’s former campaign manager Paul Manafort held secret talks with Julian Assange inside the Ecuadorian embassy in London, and visited around the time he joined Trump’s campaign,” claimed reporter and best-selling “Collusion” author Luke Harding, Dan Collyns, and a very sketchy third person whose name was bizarrely scrubbed from The Guardian’s byline for its online version but appeared in the print version: Fernando Villavicencio, described by the Washington Post, discussing this mysterious discrepancy, as “an Ecuadoran journalist and activist.”

That the Guardian story would be seen as an earth-shattering revelation — one that would bring massive amounts of traffic, attention, glory, and revenue to the paper — was obvious. And that’s precisely how it was treated, as it instantly ricocheted around the media ecosystem with predictable viral speed: “The ultimate Whoa If True. It’s … [the] ballgame if true,” pronounced MSNBC’s Chris Hayes who, unlike many media figures reacting to the story, sounded some skepticism: “The sourcing on this is a bit thin, or at least obscured.”

But Hayes’s cable news colleague Ari Melber opened his MSNBC show that night excitedly touting The Guardian’s scoop, while meticulously connecting all the new inflammatory dots it uncovered, asking one guest: “How does this bombshell impact the collusion part of the probe”?

From the start, the massive holes in The Guardian’s blockbuster were glaring. As I noted on the day the story published, analysts from across the political spectrum — including those quite hostile to Assange — expressed serious doubts about the article’s sourcing, internal logic, self-evidently dubious assertions, and overall veracity, even as many media figures uncritically trumpeted it.

Five weeks later, all of these questions remain unanswered. That’s because The Guardian — which likes to pride itself on flamboyantly demanding transparency and accountability from everyone else — has refused to provide any of its own.

I’m in
[/newsletterIn lieu of addressing the increasingly embarrassing scandal, The Guardian’s top editors and reporters on this story have practically gone into hiding, ignoring all requests for comment and referring journalists to a corporate PR official who provides a statement that is as vague and bureaucratic as it is non-responsive. It’s easier to get a substantive comment from the National Security Agency than from The Guardian on this story. 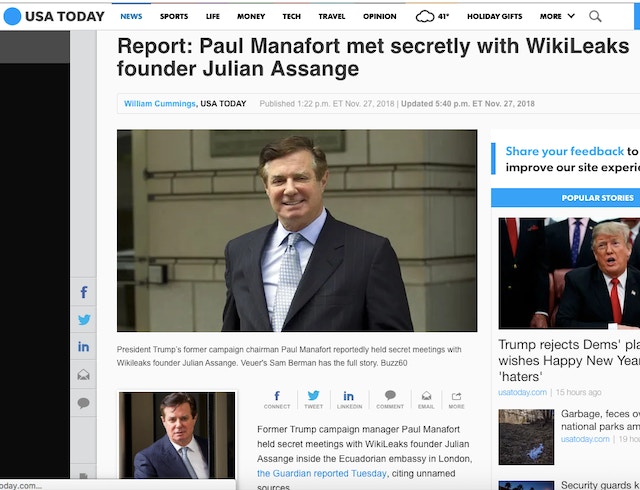 The Guardian’s stonewalling appears even more unjustified given the affirmative attacks on the truth of its central claims. The former consul and first secretary at the Ecuadorian Embassy in London, Fidel Narváez, said emphatically in an interview with the British outlet The Canary that The Guardian story was “a fake” and provided that outlet with a formal complaint to the paper, in which he said at least one other story from the same Ecuadorian intelligence sources was also fabricated.