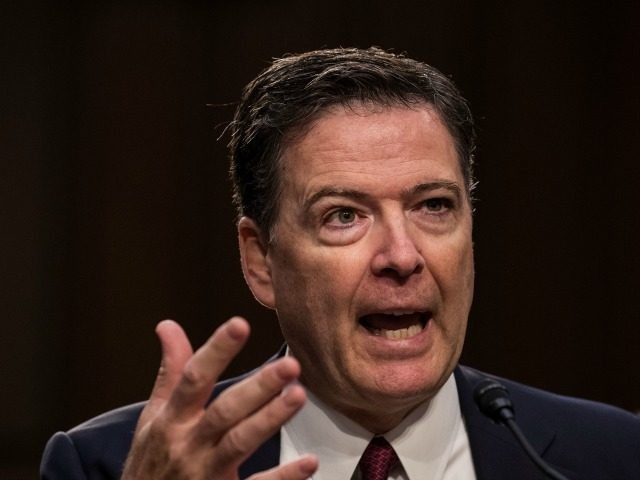 In testimony, former FBI Director James Comey says that prior to signing a FISA application to obtain a warrant to conduct surveillance on Carter Page, a former adviser to President Trump’s 2016 campaign, Comey was aware that the dossier authored by former British spy Christopher Steele was financed by Democrats who opposed President Donald Trump.
Yet according to Democratic and Republican House Intelligence memos, that information was not specifically included in the FISA application, which in part relied on Steele’s work to obtain warrants to monitor Page.

The Steele dossier was reportedly funded by Hillary Clinton’s 2016 presidential campaign and the Democratic National Committee (DNC) via the Perkins Coie law firm.

In testimony to the House Judiciary Committee on Friday, Comey was asked about his knowledge of Steele’s political patrons. A transcript of Comey’s testimony was released on Saturday.

The former FBI director was also asked whether he learned about political actors financing Steele “before there were any court filings” — a clear reference to the FISA application, which Comey first signed in late October 2016.

Comey’s FISA application to conduct surveillance did not specifically state that the FBI had information that Steele was being paid in connection with any U.S. political party, according to House documents.

A House Intelligence Committee memo released last February documented that as FBI director, Comey signed three FISA applications to spy on Page with the dossier serving as part of the basis for the warrant requests.

“Neither the initial application in October 2016, nor any of the renewals, disclose or reference the role of the DNC, Clinton campaign, or any party/campaign in funding Steele’s efforts, even though the political origins of the Steele dossier were then known to senior and FBI officials,” the memo states.

Democrats on the House Intelligence Committee released a rebuttal of the House memo that confirms the key contention that the FBI and DOJ both failed to inform the FISA court that Steele’s dossier was funded by Hillary Clinton’s 2016 presidential campaign and the Democratic National Committee (DNC) via the Perkins Coie law firm.

The Democratic memo quotes a footnote from the FISA application, which says that Steele:

That footnote was further confirmed when the Trump administration released a redacted version of the FISA applications last July.

The statement in Comey’s FISA application that “the FBI speculates” that Steele “was likely looking for information that could be used to discredit” Trump’s campaign is a far cry from informing the court that the dossier utilized in the FISA warrant was paid for by Trump’s primary political opponents, namely Clinton and the DNC.