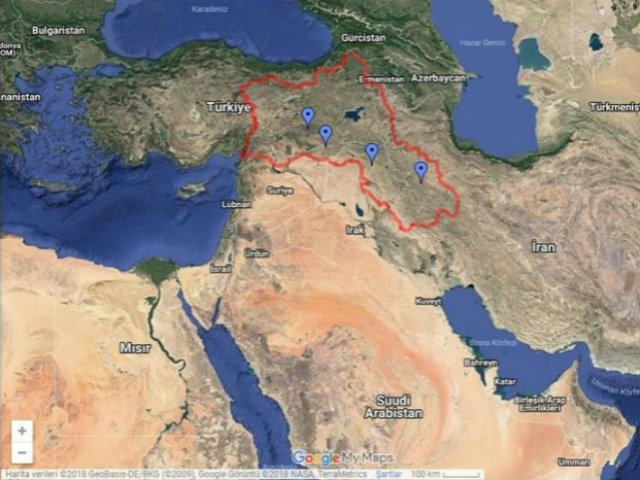 Kurdish news agencies report on Friday that a map of greater Kurdistan – featuring territory belonging to Turkey, Iran, Iraq, and Syria – no longer appears on Google Earth, replaced by a message stating that the map violated “our Terms of Service and/or policies.”

The map, which appeared to be user-generated and not a recognition of a sovereign state of “Kurdistan,” became the focal point of controversy this week after several Turkish lawmakers complained that the map was “at the service of terrorist organizations” by recognizing the existence of a territory where ethnic Kurds are the majority.

Turkey is currently fighting an insurgency by the Marxist Kurdistan Workers’ Party (PKK), which seeks to liberate Kurdish territory from Turkish rule. Ankara considers most Kurdish organizations to be wings of the PKK, a U.S.-designated terrorist group. Turkish officials have expanded their opposition to the PKK to conflict with the Syrian Kurdish People’s Protection Units (YPG/YPJ), a U.S.-allied militia largely responsible for the eradication of the Islamic State from Syrian territory.

In opposing Kurdish separatism, the government of President Recep Tayyip Erdogan has expanded crackdowns on activity in Kurdish cities in the nation’s south, most prominently Diyarbakir, and arrested dozens of Kurdish and pro-Kurdish politicians. The Turkish parliament banned the use of the word “Kurdistan” in the legislature last year.

The Kurdish outlet Kurdistan 24 reported on Friday that a search for the user-generated “Kurdistan” map no longer brought up any results on Google’s My Maps service. Instead, a message appeared reading, “Unavailable. This map is no longer available due to a violation of our Terms of Service and/or policies.”

The outlet claims the map had been “available for years” and was not designed by a Google employee in that capacity. “Because the map was created and shared publicly by a user through their personal account, it remains unknown if their rights have been violated or if they will appeal,” the report notes.

Rudaw, another Kurdish outlet, clarified that Google has not issued a statement confirming that it removed the map at the behest of the Turkish government. Ankara has also not stated whether it received an official response to its complaint.

Turkey has had some success in the past with censoring Google, according to Rudaw. The technology giant has reportedly withheld content in response to 18 percent of complaints from the Turkish government, which number to nearly 10,000 complaints in the past decade.

The Kurdistan map incident erupted this week after a lawmaker member of the nationalist Iyi (Good) Party revealed its existence, demanding the Turkish government pressure Google into removing it. Turkey’s Information and Communication Technologies Authority [BTK] obliged, reaching out to Google and demanding the “urgent removal” of the map.

“[BTK] officials talked to the platform’s [Google] representatives for the urgent removal of the map as part of their liabilities over national and international statutes,” Transport and Infrastructure Minister Cahit Turan said on Thursday.

The Turkish government has not officially responded to the removal, but government-friendly media reported the map’s disappearance as a success on Friday. Yeni Safak, a pro-Erdogan outlet, called the map “scandalous” and accused it of having “violated Turkish borders by including southeastern provinces of Turkish territory, as well as Syria, Iraq and Iran in the map of so-called ‘Kurdistan.’” The publication was quick to note that Google did not generate the map, but it was, rather, the handiwork of a “manipulative user.”

Kurdistan is the native land of the ethnic Kurdish people, whose population is estimated between 25 and 35 million people. The governments of the four countries it spans – Turkey, Iran, Iraq, and Syria – all oppose Kurdish sovereignty, though Iraq has allowed the creation of the Kurdistan Regional Government (KRG) of Iraq, an autonomous governing entity.