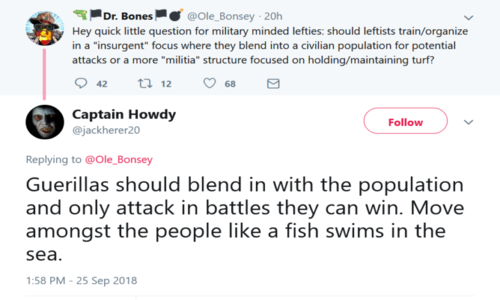 – ‘They Seek The Literal Sacrifice Of All God’s Children: Arise, As It’s Now Or Never!’

The brand new and extremely powerful alert from Steve Quayle we’ve republished in the section below is one of the most important messages from Steve to his readers that he has ever put out and he has allowed us to publish this for ANP readers to help emphasize his warning that the hour is late and we should all call upon the power of God Almighty to help protect Judge Brett Kavanaugh and his family from the satanic-onslaught they are now under.

With even President Trump recently calling the attacks upon Judge Kavanaugh and his family ‘evil’, we’ll take a look within this ANP story at not only the stunning and despicable acts of desperation by those on the left to take down a man who has already been investigated by the FBI 6 times but newly emerging information that the doxing of GOP Senators Lindsey Graham, Orrin Hatch and Mike Lee over their support for Kavanaugh came straight from the office of Democratic representative Maxine Waters.

And we shouldn’t be the least bit surprised that the new levels of depravity being fallen into by the left includes Communists openly planning armed insurrection on twitter, yes, the same twitter that blocks Conservatives for ‘hate speech’ for calling out Islamic terrorism. As PJ Media reported in this July 27th story which the Drudge Report linked to, one ‘Dr. Bones’ on twitter put out the following: “Hey quick little question for military minded lefties: should leftists train/organize in a ‘insurgent’ focus where they blend into a civilian population for potential attacks or a more ‘militia’ structure focused on holding/maintaining turf?”

Actually discussing planning the assassinations of those who they perceive to be their ‘political enemies’ by carrying out ambushes to ‘bleed right-leaning forces dry’, they also discussed ‘pretending to help everybody during the day‘ but ‘never talk about their nighttime activities‘. And as we see detailed further below, more and more are calling for a level of violence to be added to ‘the resistance’.

With many on the left sure to break down into outright insanity should the FBI once again do their job and verify that Brett Kavanaugh has nothing in his background that Americans would be ashamed of, and the Republicans do their job and confirm him, how far away might America be from the ‘breaking point‘? As Steve Quayle warns us, we’ve come to the point in time when we must fast and pray as only God can defend us now. His critical new alert:

“Call to prayer and fasting: For such a time as this: Calling all believers in Jesus Christ to pray and fast for the Kavanaugh family and appointment.

Never before has it been more important than this week to call upon the Living God in prayer, personal repentance and fasting for our nation. That God would arise and scatter our enemies that seek our country’s demise and our personal destruction as Christians and followers of our Lord Jesus Christ!

The villification of Brett Kavanaugh should serve as a warning template, as to how personal and individual character assassination coupled with lying and perverse lips is laying the ground work for the anhilation of all Bible believing, Blood of Jesus redeemed Christians.

Already free speech is being assassinated by the communist satanists and their hordes. The pogroms or purges of Christians and Conservatives will follow – first comes the silencing of truth and then comes the assassination of those who speak it.

I am asking that everyone pray and fast one day or more this week and seek the Living God as you never have in your entire life before as the peril you and your children face is beyond my ability to even articulate or define. The pedophiles, cannibals and satanists all seek your destruction and the literal sacrifice of all God’s Children. Arise now as it’s now or never!” 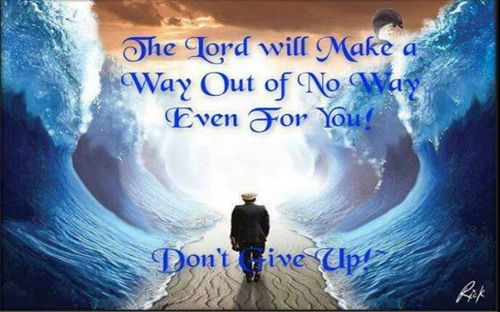 The long stated saying “absolute power corrupts absolutely” absolutely applies to the Democrats under Barack Obama, Hillary Clinton, Nancy Pelosi, Dianne Feinstein, Maxine Waters and Chuck Schumer over the past decade and as South Carolina Senator Lindsey Graham had pointed out in the game changing moment of Thursday’s non-stop wall to wall hearings on the accuser of Brett Kavanaugh, “Boy, you all want power. God, I hope you never get it. I hope the American people see through this sham.”

And President Trump didn’t shy away from calling out evil as evil as the Daily Mail reported in this recent story with Trump calling the attacks upon Kavanaugh “a big fat con job perpetrated by very evil people” while adding: “I must say, because some of them know that this is just a game that they’re playing. It is a con game. It is at the highest level. We’re talking about the United States Supreme Court. This can go on forever.”

And if the doxing of GOP Senators, apparently by someone in Maxine Waters office, isn’t bad enough, Gateway Pundit reported on Friday that far left activists are calling for violence should Kavanaugh be confirmed to SCOTUS and Roe v Wade overturned, with prominent antifa-linked activist ‘Emily G’ calling for a “violent general strike” just days after Senator Ted Cruz and his family were confronted at a restaurant and during a period of time when a countless number of threats of physical harm have been made against President Trump, Judge Kavanaugh and his family and other Republican members of Congress as well as Trump’s supporters. 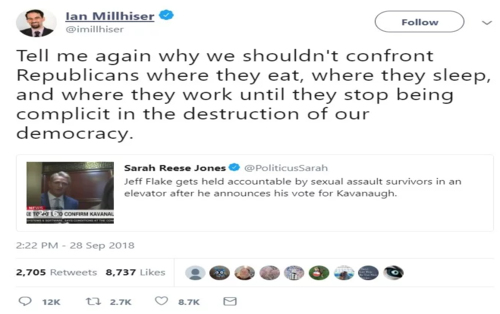 And according to this new story over at 100 Percent Fed Up, Ian Millhiser recently put out the tweet seen above which in which he seemingly calls for Republicans to be confronted “where they eat, sleep and work until they stop being complicit in the destruction of our democracy“. Seriously? Wasn’t it Barack Obama and Hillary Clinton who sold out America and our REPUBLIC for globalism?