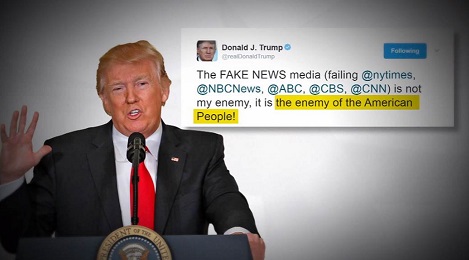 In December 2017, it was reported that over 30 percent of the general population in America believe the mainstream media, which we call the Mockingbird Media, agreed with President Trump when he called them the “enemy of the people,” with 63 percent of Trump supporters agreeing with that statement. Other findings show that 52 percent of the public had “not much” trust in the media or “none at all,” while only 49 percent have a “great deal,” or “fair amount of trust.”

On political lines, 74% percent of Democrats share “a great deal” or “a fair amount” of trust and confidence in the press but only 19% of Republicans concur.

In addition, 69% of Americans believe the media “tend to favor one side.”

The media of course blames President Trump as he has been a vocal critic of the them since well before his candidacy for President, when he nicknamed them “Fake News,” but a look at historical polling tells a completely different story. 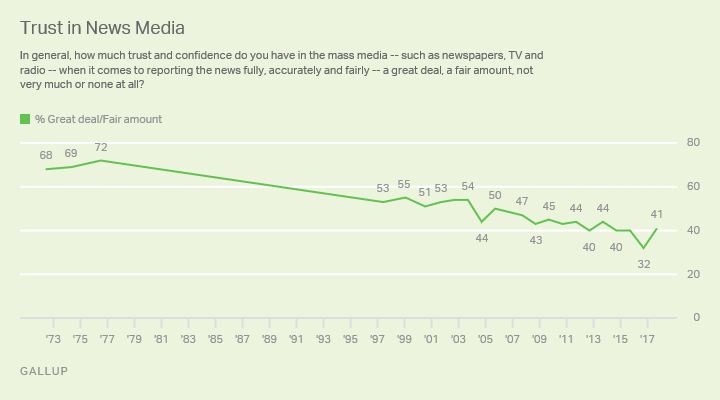 President Trump didn’t erode the public’s trust in the media, they did that all by themselves as the consistent downward trend shows. The President just called them out it, publicly.

His latest reference to CNN “Fake News,” came during his presser at the G-7, when a CNN reporter asked an obviously slanted question which sounded more like “gossip,” than actual news and President Trump asked him which outlet he was with and when the reporter said CNN, Trump pounced on “Fake News CNN – The Worst,” before he went on to answer.

WHY ARE LIBERALS GIVING THE MEDIA A FREE PASS ON THEIR OUTRIGHT LIES?

It is completely understandable why Trump supporters think the media is the “enemy of the people,” since the liberal media demonized Trump supporters from the beginning, labeling them racist, homophobes, Islamophobes, sexists, misogynists, along with a whole host of other descriptors about the “deplorables.”

The real question is why 74 percent of Democrats share “a great deal” or “a fair amount” of trust and confidence in the press after all the documented lies they have been told, right to their faces?

Before the primaries even ended, the media constantly told their audience of liberals and Hillary Clinton supporters that Donald Trump would never win the GOP nomination for president. Then he did. Then the media relentlessly declared his candidacy dead in the water every time he said something publicly they did not like. They pushed polls, which we all now know were consistently wrong, and convinced Clinton supporters and liberals everywhere that Donald Trump simply could not garner the electoral votes to win the presidential election. They were reporting that right up until they sat there on live TV, shocked because they believed their own lies, and announced that Donald Trump had won the presidential election and would be the next President of the United States of America.