To understand the consequences of the credit cycle, we must dismiss pure opinion, and examine the evidence rationally. This article assesses the fate of the dollar on the next credit crisis, a subject of increasing topicality. It concludes that the late stage of the credit cycle has important similarities with 1927, when the Fed eased monetary policy, following evidence of a mild recession.

Contemporary financial markets are inherently emotional, mainly because they are awash with government-issued currencies. Investors and speculators would never be as careless with sound money as they are with infinitely-elastic fiat. Instead, they are ready to gamble with it, partly because they know that standing still guarantees a loss of purchasing power and partly because rising asset prices, which is actually the reflection of a falling currency, makes selling currency for assets an appealing proposition. Furthermore, credit for speculation is freely available through futures and options.

Financial markets are also irrational due to modern economics, the explanation for it all, having become a belief system. If all central banks pursue economic beliefs, as an investor you will probably do so as well, otherwise you are out of step in a world that follows trends. That works until it doesn’t. Central bankers pursue policies which are a mishmash of neo-Keynesianism and monetarism, the balance between the two setting the fashion of the day, with an overriding assumption that unregulated markets are the source of all our economic and systemic troubles. But there is one element of monetary policy that does not change, and that is a conviction that everything can be cured by monetary inflation.

Is this condemnation of monetary policy over the top? Well, only last week Mark Carney, Governor of the Bank of England, was authorised by the UK Treasury to issue a further £1.2bn of capital, which according to press reports will allow the Bank of England to create further loans totalling more than £750bn.[i] Nice work if you can get it: create some sterling by a few strokes on a keyboard and gear up on it by issuing a further 625 times as much, only backed by the myth that the central bank’s capital is real. What is the purpose? To banish all risk emanating from the private sector, of course.

You can only justify monetary policies of this sort by supposing they are the right thing to do. But it tells us something important: deflation, however you define it, is not the problem.

Commentators and analysts appear to be in general agreement that deflation is the greatest risk facing us today, and every time a statistic falls short of market expectations, the walking shadow of deflation flits across the financial stage. We are all becoming nervously aware of the accumulation of debt, and the risk that consumers and businesses are teetering on the edge of another credit crisis.

In 1933, the economist Irving Fisher described how when loans start to go bad, banks liquidate collateral, thereby driving down asset prices and leading to widespread bankruptcies. According to Fisher, a cycle of debt liquidation and falling asset prices interact in a vicious self-feeding collapse, suppressing demand, resulting in falling commodity prices and unsold goods. Nearly everyone is terrified of this risk, forgetting it is something that can only happen with sound money, because sound money retains its purchasing power. In the 1930s, the dollar was exchangeable for gold, until Roosevelt made gold ownership illegal for US citizens and devalued the dollar. Today the monetary landscape is vastly different: gold has been banished from the fiat money system and today’s government-issued unbacked currencies are as unsound as they get.

Therefore, deflation is an inappropriate way of describing any economic condition when central banks are prepared to pump unlimited fiat currency into their economies at the first sign of trouble. Wrongly, deflation has become the catch-all description for nearly all forms of economic failure. Instead, we should understand that economic failure, short of wars and plagues, is always associated with monetary inflation, and the undermining of a currency’s purchasing power.

Consider the economic effects of an inflationary monetary policy, such as that of the Argentinian central bank. The government presides over an economy where price inflation is officially running at 26%, but prices are estimated to be actually rising at three times that, based on estimates of purchasing power parity.[ii]

Argentina’s economy is growing at 2% in 2018, according to a recent report from the OECD.[iii] But realistically, the Argentine economy is contracting severely when you take into account the true loss of the currency’s purchasing power, in which GDP numbers are measured. So, from the OECD we have a neo-Keynesian commentary claiming marginal economic growth, when the reality can also be described in today’s loose economic parlance as intensely deflationary, because real GDP growth adjusted for inflation is strongly negative.

It is not deflation. Argentina is suffering from severe price inflation, the consequence of monetary policy. The inflationary situation in the US and elsewhere is no different, just less intense. Like the Argentines, the US through official statistics underreports inflation, in this case at only 2.8%, and even that is ignored by the Fed. A more realistic rate of price increases, according to Shadowstats.com, currently exceeds 10%.[iv] This leaves the real Fed Funds Rate adjusted for an approximation of actual price inflation at minus eight per cent, which by any sensible definition is not deflationary.

Despite the monetary reality, the financial community, with an eye only on the overhang of debt, persists in thinking that deflation, not inflation, is the greater risk. This conclusion can only be the result of imprecise economic definitions, which allow the monetary establishment to fool itself along with us all into accepting their inflationary monetary policies are valid.

Deflationists seem to believe, in accordance with Irving Fisher’s debt-deflation theory, that debt in a credit crisis will be liquidated, creating demand for currency. This simplistic approach ignores the fact that during an inflation, which perforce leads to far higher nominal interest rates, debt liquidation is an ever-present factor as well. Fisher’s description of how businesses and banks fail in an economic downturn is selective and has been used to justify monetary intervention to prevent borrowers and banks from paying for their mistakes. It changes the private sector from the survival of the fittest to survival of the influential, robbing savers for the benefit of the profligate.

There is no economic justification for this one-sided view of debt-deflation, but we have to live with it. We can be sure that in the event of a general credit crisis the Fed will issue enough currency to stabilise the domestic economy. That is official policy and the reason the Fed was created and exists. The difficulties for foreign dollar-denominated obligations are a separate and secondary consideration. However, we can assume that the major central banks will extend inflationary swap agreements between themselves to allow them to support their individual financial systems, wherever foreign currency exposure is a risk factor. But that still leaves us with imbalances that are likely to disrupt exchange rates.

There is a general assumption that the liquidation of cross-border positions will lead to net demand for the dollar, driving it up against other currencies. According to this logic, the superiority of the dollar as the reserve currency will ensure that sales of foreign currency arising from a credit crisis will result in the purchase of dollars.

After all, these dollar bulls tell us, this is corroborated by the Triffin dilemma. According to Professor Triffin, dollars required for international trade liquidity are supplied by US trade deficits. And if the US goes into recession, the economic contraction will restrict the supply of dollars, forcing the exchange rate higher. We need to unpick this flaky argument to challenge its validity.

Professor Triffin forecast the end of the Bretton Woods system in his book, Gold and the Dollar Crisis: The Future of Convertibility, published in 1960. In it, he argued that the flood of dollars that went abroad following the Second World War (Marshall plan, Korea, etc.) would lead to the dollar being driven off the gold standard. This actually happened in a series of events, starting with difficulties in the London gold market in the late 1960s, exacerbated by further overseas spending on the Vietnam War, and culminated with the suspension of the Bretton Woods agreement by President Nixon in 1971.

Triffin argued in his book that the dollar could only stay on the gold standard by running trade surpluses to reverse the tide and absorb loose dollars, which would otherwise be exchanged for gold. This, to an interventionist, was impractical, and exposed the dilemma: an international reserve currency required the issuer to run domestic deficits to provide the liquidity needed for it to act as a reserve currency. Yet, such a policy contained within it the seeds of its own destruction.

The relevance today is found in the fact, as Triffin pointed out, that destructive domestic economic and monetary policies to support international liquidity would eventually undermine the reserve currency itself. This is conveniently forgotten by those who claim Triffin’s dilemma ensures demand for the dollar will continue, and that the US can always run trade deficits without undermining the dollar.

The dollar is oversupplied

In order to assess the effect of a credit crisis on the dollar, we must therefore gauge how extended the dollar appears to be in terms of its international circulation. The most recent numbers from the US Treasury TIC data is for the position in June last year for foreign ownership of US securities, and for end of year 2016 for US ownership of foreign securities. Putting to one side these timing differences, since 2006, dollar-denominated investments owned by foreigners totalled $8.52 trillion more than US ownership of non-dollar foreign investments, up 275% since 2008. This is illustrated in the following chart. 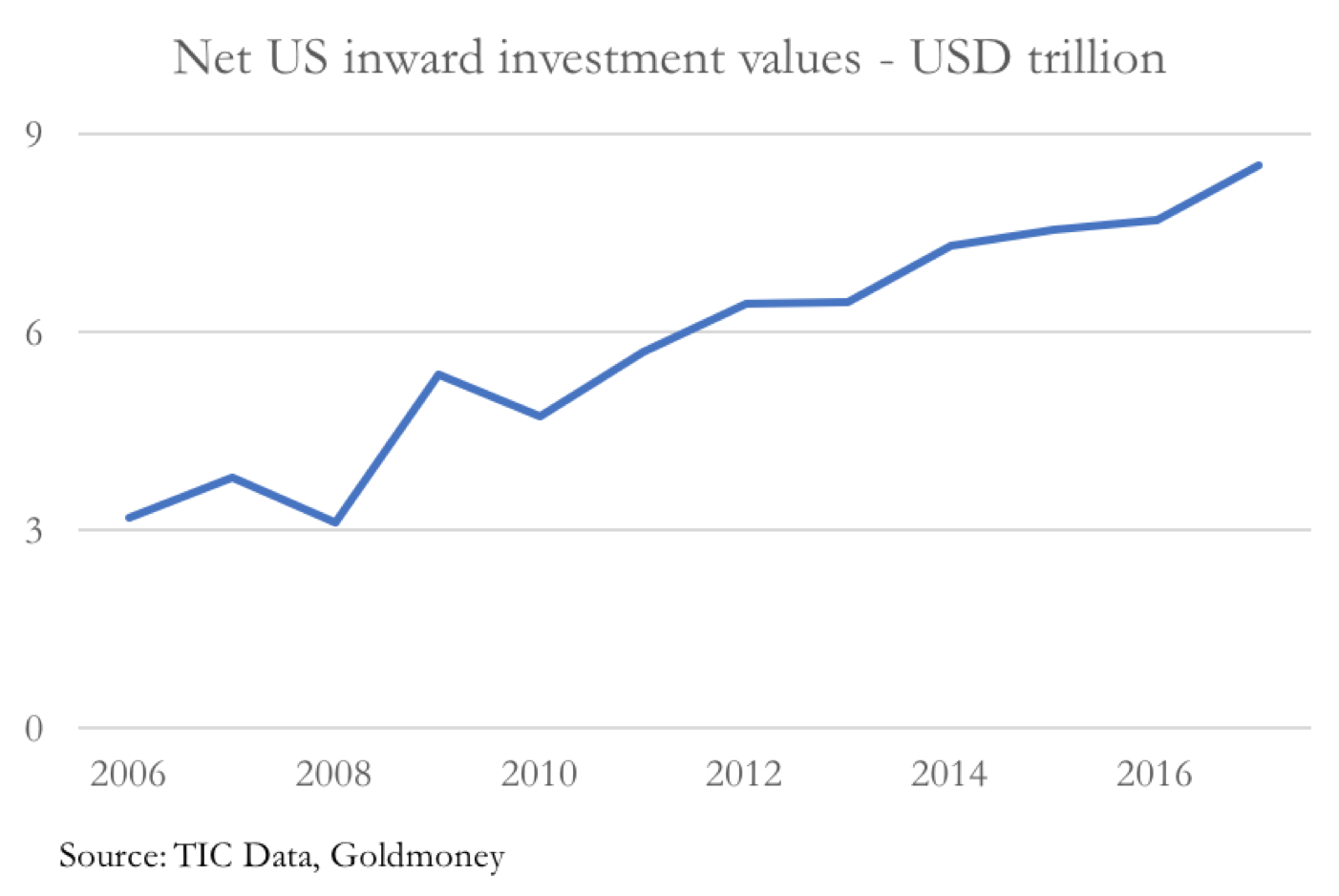 We cannot say for sure this represents something close to Triffin’s tipping point, where the quantity of dollars in foreign hands will undermine the currency. But according to the World Bank, global GDP has only increased by about 20% since 2008, suggesting that there are, indeed, far too many dollars in foreign hands relative to economic activity, compared with ten years ago.

This being the case, the dollar could be set to fall on the foreign exchanges during a credit crisis, when investment liquidation pressures increase, and currency hedges are initiated. Importantly, it could also be the desired outcome for the Fed, which is firmly wedded to the idea that falling prices at the retail level must be avoided at all costs, and a lower currency could be used with zero, or even negative interest rates to help support domestic prices. In these circumstances, gold, and perhaps even cryptocurrencies, will be seen by investors as safe-havens from inflationary monetary policies, whose primary purpose will be to contain debt liquidation and protect the commercial banks.

However, this is not the whole picture with respect to exchange rates.