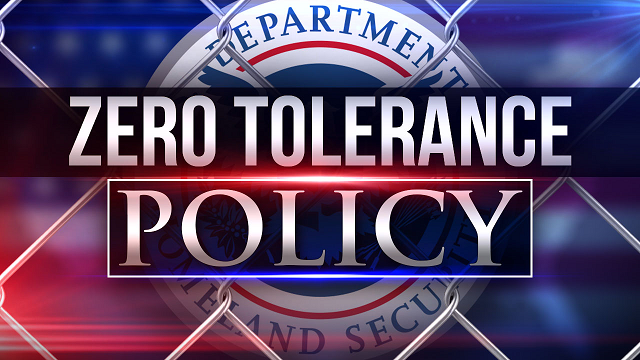 All the coverage and screams from the liberal media and Democratic politicians over the past few weeks, about children being ripped out of the arms of their parents, has just been exposed by President Trump, when he signed an executive order that would keep families together while those that crossed over the border illegally were awaiting prosecution, as nothing more than hyperbole.

They never gave a damn about the “children,” at all, as now they have been forced to expose their true agenda. They want completely open borders, unlimited illegal immigration, and want no one prosecuted for committing the crime of crossing the border illegally, with or without children, instead of coming to a point of entry.

The Trump administration ended the practice of catching illegal aliens crossing over the border at places that are not legal points of entry, and simply giving them a notice to appear in court and releasing them into the United States to disappear, where only a minuscule percentage ever bothered appearing in court. With the “zero-tolerance” policy, every single person caught entering the U.S. illegally are to be prosecuted. Period.

Due to a court ruling by the Ninth Circuit, children could not be held with parents facing prosecution for more than 20 days, and under the previous administration the basic policy was to ignore the law and simply release the alien minors and the parents, rather than prosecuting them for crossing the border illegally.

Note: Immigrants legally entering at a point of entry with their children, were not separated because coming to a legal point of entry to request asylum is not a crime, therefore the parents faced no legal action.

As previously reported, 10,000 of the 12,000 alien minor children in shelters across the country, were sent to the border unaccompanied, or with smugglers and traffickers, not with a parent, guardian or custodian.

On June 20, 2018, President Trump gave Democratic politicians and liberals, who have been wailing non-stop over “separating” parents from their children, exactly what they “claimed” they wanted.

He signed an executive order titled “Affording Congress an Opportunity to Address Family Separation,” which ordered that alien families will be kept together “during the pendency of any criminal improper entry or immigration proceedings involving their members,” unless it poses “a risk to the child’s welfare.”

The order also ordered the Attorney General to “file a request with the U.S. District Court for the Central District of California to modify the Settlement Agreement in Flores v. Sessions, CV 85-4544 (“Flores settlement”), in a manner that would permit the Secretary, under present resource constraints, to detain alien families together throughout the pendency of criminal proceedings for improper entry or any removal or other immigration proceedings,” and to “prioritize the adjudication of cases involving detained families.”

In signing the EO, the president both kept his zero-tolerance policy in effect, saying 100% of those crossing at illegal points and were caught, would still be prosecuted, but while pending their court appearance they would be housed with their children, IF they were their children, or the adults were the legal guardians.

It took less than a day for liberals, the media (yes, redundant, I know) and Democratic politicians to start gnashing their teeth and stomping their feet, and totally exposing their true agenda, by moving the goal posts to complain, but illegal aliens crossing the border were still going to be prosecuted for breaking the law!!

Their agenda was always to create a media firestorm using the “children” as political pawns, in an attempt to get President Trump to re-implement the old catch-and-release policies.

By giving them what they spent weeks claiming they wanted, he forced them to publicly expose themselves as liars.

Now their argument, as shown by Senator Dick Durbin in a statement regarding the EO, is that President Trump is now “locking up children and their families.” Durbin, and other Democrats completely ignore the fact that the only people that are detained are those crossing the border illegally, not the ones using a point of entry.

Republican Senator Marco Rubio calls out Durbin and others, stating “The ink isn’t even dry on the new executive order ending separation policy & some Democrats already arguing that keeping families together isn’t enough. Now they want them & their parents released after unlawful entry knowing full well that high % will never appear for hearing.”

They never cared about the “children,” because if they truly cared at all, they would be making public statements begging, pleading with parents to 1) Come to a legal point of entry where they would face no charges or prosecution; 2) Never send their children with smugglers or traffickers or alone. 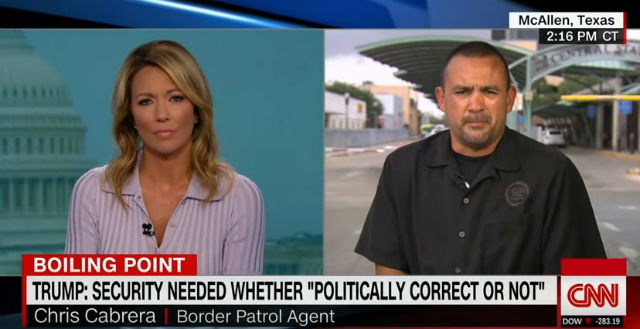 CNN’s Brooke Baldwin brought Chris Cabrera, a spokesperson for the National Border Patrol Council, on her show, where at first she played the recently published audio of children wailing and unnamed workers in the shelter making a joke, then demanded Cabrera explain or defend it, to which he didn’t, he wasn’t there, but then she attempted to push the liberal media’s script about how cruel and inhumane it was to put these children in shelters, and Cabrera schooled Baldwin on some very brutal truths.

First he explained how Congress needs to fix the laws, but then he described  a specific example of when children are “ripped out of the arms” of their parents, such as a man, who had been convicted of rape in the U.S., having been deported, then attempting to sneak back over the border with his five year-old child, where he points out, that isn’t someone you want to just let through.

Then Cabrera described some of the horrors that Border Patrol see every day, among the unaccompanied children:

“Right now we have this beacon of, ‘We’ll leave the light on for you and let you come illegally into the country.’ If you’ve seen some of the stuff we’ve seen, you’d understand how important it is to have a tough stance to divert people from coming here.”

When you see a 12-year-old girl with a plan B pill, her parents put her on birth control because they know getting violated is part of the journey, that’s a terrible way to live. When you see a 4-year-old girl traveling alone with just her parents phone number written across her shirt. We had a 9-year-old boy have heat stroke in front of us and die with no family around. That’s because we’re allowing people to take advantage of this system.

What parent sends their 12-year old daughter, alone, among traffickers and smugglers, knowing she would likely be raped during her travels and giving her birth control so she won’t get pregnant from being raped? Who sends a four-year old out alone? If an American parent did that, their children would be ripped away from them by CPS, yet liberals are too busy screaming over the fact that the U.S. is housing those children, feeding them, clothing them, educating them and giving them counseling.

If they cared, they would be praising the Trump administration for taking them in… what other option is there? Throwing them out on the streets?

Cabrera also point out that “daily” they find groups, smugglers/traffickers using children, who are not theirs, to try to enter the U.S. illegally and he rightly asks, what happens to those children if they get let in when the adult who used them doesn’t need them anymore?