Anthony Bourdain was found dead by hanging in his hotel room in France, adding to the long and baffling list of celebrities who lost their lives in this grim fashion.

Anthony Bourdain was found dead on Friday morning by his friend and French chef Eric Ripert in his room at a luxury hotel in northern France. According to the authorities, Bourdain killed himself by hanging. The exact cause of the death is still under investigation.

To many, Anthony Bourdain’s suicide is difficult to compute. He was rich, famous, and beloved by many. He had a dream job: Travelling the world and eating great food. In fact, Bourdain was in the midst of filming an episode of his CNN TV show “Anthony Bourdain: Parts Unknown” when he was found dead. Bourdain was extremely driven and always had several projects in the works. His editor recently revealed that he was actually working on a new “personal” book.

Bourdain also had an 11-year-old daughter who he often cited as a cause of his happiness. He also appeared to be infatuated with his girlfriend Asia Argento and had shown great support in the causes she championed. Only a few days before his death, Bourdain was telling IndieWire how much he was proud of his girlfriend and that he loved filming with her.

Indeed, everything about Bourdain exuded positivity, which was combined with an unquenching thirst for new goals and projects. The fact that he would abandon his daughter and scar her for life while giving up on all of his ongoing projects seems out of character.

“I’m still in total shock of course. I just can’t believe it, and I can’t believe it would happen while he was in the middle of working. If there was one thing that was always his saving grace, it was his ability to throw himself into his work — he was never happier than when he was on some adventure or in the middle of a project, so it’s so bizarre to me, and I’m sure to many people who knew him, that of all the times, this happened when he was doing what he loved and with people he loves.”
– People, Anthony Bourdain’s Dark Side ‘Finally Overtook Him’: ‘He’d Always Managed to Outrun It,’ Says Source

Of course, as usual, only hours after death, news sources were publishing stories about his addiction problems with heroin and crack in the 1980’s … which were over 30 years ago. Also, as usual, some stories surfaced about his “demons” and his “dark side”.

“I guess the darkness just finally overtook him,” adds the source. “That’s the thing about him and he’d have been the first to say it — his dark side was always there, but it’s like the darkness was always just a few steps behind him, it was like he’d managed to outrun it, literally, with this life of far-flung adventures and everything. But it was never really gone.”
– Ibid.

Also, as usual, stories came out about how he was struggling with depression.

In the past weeks, Bourdain was particularly active as he became an outspoken advocate of the #metoo movement, along with his girlfriend Asia Argento. While presenting the best actress prize at the Cannes Film Festival, Argento made a scalding speech about Harvey Weinstein.

“In 1997, I was raped by Harvey Weinstein at Cannes. I was 21 years old. This festival was his hunting ground. I want to make a prediction: Harvey Weinstein will never be welcomed here ever again. He will live in disgrace, shunned by a film community that once embraced him and covered up for his crimes. 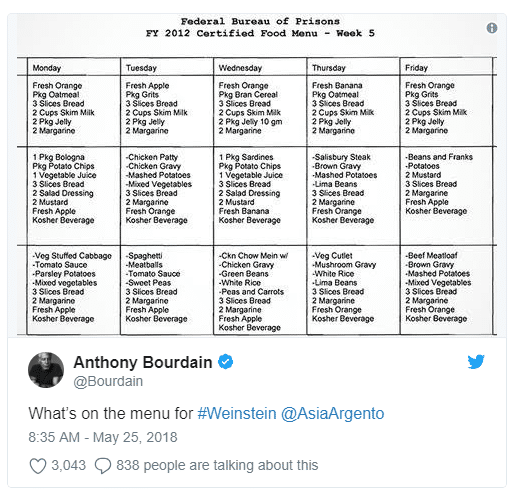 Less than a week before his death, Bourdain purchased a painting from artist John Lurie with a chilling title: “The sky is falling, I am learning to live with it”. 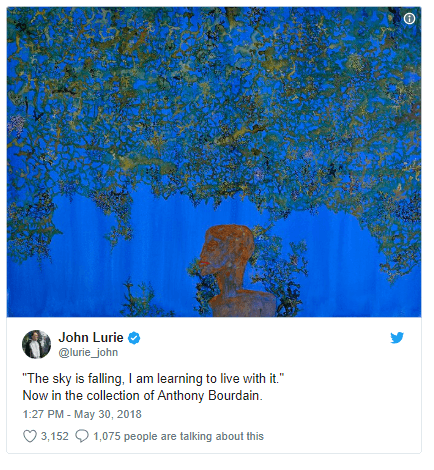 In the hours leading up to Bourdain’s death, Argento posted a cryptic story on Instagram:

Who was she referring to?