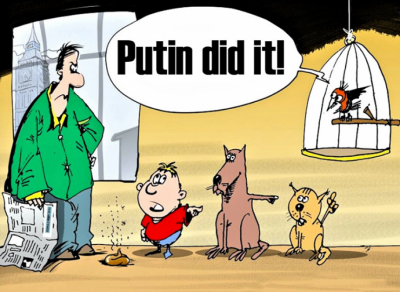 United Nations Secretary-General Antonio Guterres: “The Cold War is back —with a vengeance but with a difference. The mechanisms and the safeguards to manage the risks of escalation that existed in the past no longer seem to be present.” (April 13, 2018)

The deadly recurrence of Russophobia bears comparison to the psychosis of the Salem witch trials, several centuries ago, and with the pathology of McCarthyism in the USA in the 1950’s.

“In 1692 the Massachusetts Bay Colony executed fourteen women, five men, and two dogs for witchcraft. The sorcery materialized in January. The first hanging took place in June, the last in September; a stark, stunned silence followed. Although we will never know the exact number of those formally charged with having ‘wickedly, maliciously, and feloniously’ engaged in sorcery, somewhere between a hundred and forty-four and a hundred and eighty-five witches and wizards were named in twenty-five villages and towns. The youngest was five, the eldest nearly eighty. Husbands implicated wives; nephews their aunts; daughters their mothers; siblings each other. …Few probed the subject of witchcraft as intently as did Cotton Mather, who had entered Harvard at eleven and preached his first sermon at sixteen. He knew that the hidden world was there somewhere. He would relinquish no tool to exhibit it.” (The New Yorker, September 7, 2015)

Today the atmosphere at the UN Security Council resembles the insanity of the witch hunts in Salem, Massachusetts only several hundred years ago. There is a witch hunt, and according to eleven members of the Security Council, the birthplace hatching these witches is Russia (and North Korea). The atmosphere of hysteria, irrationality and demonization overtaking the majority of the members of the Security Council is accurately described by Russian Ambassador Nebenzia as a “collective psychosis.” This primitive behaviour is totally inaccessible to reason, and is perilous.

For the second time since April 5, the UN Security Council, April 18, has squandered its time on the absurd UK allegation that Russia is responsible for the chemical weapon poisoning of Sergei and Julia Skripal in Salisbury on March 4th. Of course, both Skripals are alive and recovering very well, thank you very much, and except for the unexplained deaths and immediate cremation of two cats and two guinea pigs, the entire affair resembles the theatre of the absurd, except that, once again, Russia has been smeared and defamed, and accused, with insultingly flimsy arguments, of an attempted murder with chemical weapons.

Hoist on its own petard, the UK obviously intended to impress the Security Council with the scrupulous care with which they treated the Skripals, and indeed the Skripals’ entire community, and repeated on both April 5 and April 18 that:

“Following Sergei and Yulia Skripal’s poisoning in Salisbury on 4 March, the United Kingdom has launched one of the most comprehensive and complex investigations ever conducted of the use of a chemical weapon. It involves more than 250 police detectives, who are supported by a range of specialist experts and partners. They are trawling through more than 5,000 hours of closed-circuit television footage. They are examining more than 1,300 seized exhibits and interviewing more than 500 witnesses.”

However, the UK’s repeated litany, instead of highlighting exquisite concern for human rights, on the contrary, reveals the UK’s criminal negligence of the human rights of their own citizens, at least 80 of whom were burnt to death during the fire at Grenfell Tower this past year. Friday, July 28, 2017 The New York Times reported:

“Investigating London Fire, Police Invoke Manslaughter: The London police investigating the fire at Grenfell Tower that left at least 80 people dead have told survivors that there are ‘reasonable grounds to suspect’ that the organizations managing the high rise might have committed corporate manslaughter…The Grenfell blaze began on the fourth floor of the tower and raced up the building. The fire became a political crisis and a symbol of inequality in a wealthy neighbourhood after cladding used on the outside of the building was found to be flammable. More than 100 other buildings in the city were tested and found to be sheathed in similar material. Many of the survivors grew angry and frustrated with what they saw as the slow response and uneven performance of the local government council in the Royal Borough of Kensington and Chelsea in resettling and compensating them. The anger, which boiled over into protests, spurred the government to intervene. The police also began a criminal investigation.”

While Russia had absolutely no motive for committing any attack against the Skripals, spies who had fully served their prison sentences, and were then released, Russia, on the contrary, prior to an election and the hosting of the World Cup, would have every reason to avoid any action which would cast aspersions upon their own country, or discredit their reputation in any way.

Considering the crudity of the UK’s projection onto Russia of responsibility for the Skripal’s dubious indisposition, the glaring discrepancy between the UK’s negligence of the more than 80 deaths of its own citizens at Grenfell Tower, and their fixation upon the two Skripals, in addition to the UK’s unsubstantiated and obsessive repetition that it was “highly likely” that Russia was responsible for the still unidentified cause of the Skripals’ illness, the UK’s unfounded accusations against Russia for use of chemical weapons in the Skripal incident must have an another motive entirely.