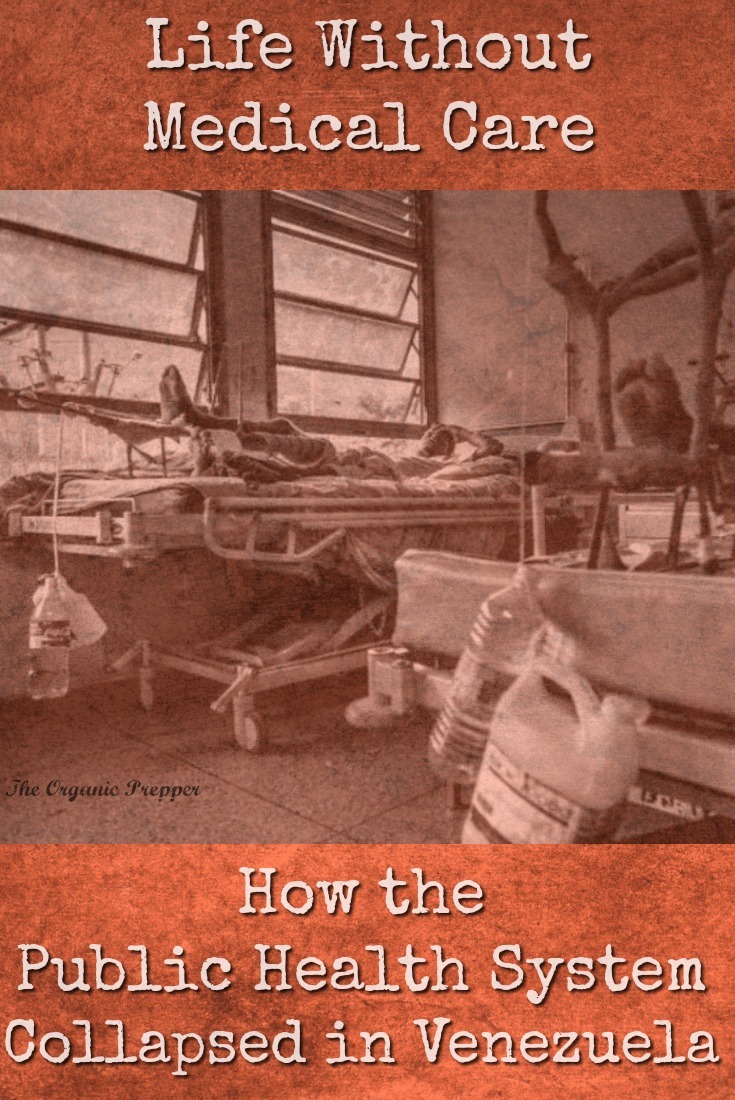 Editor’s Note: People who have been through a collapse, like Jose and Selco, know for a fact what it is like to live in a place where there are no hospitals, little medicine, and few professionals. In this article, Jose gives us a glimpse of what life is like without medical care as he shares how the public health system in Venezuela collapsed. ~ Daisy

The access to the public health system in Venezuela hasn’t been good since the middle 70s. In the bigger cities, things were more or less decent until the middle 80s. This system, based on mere profits as quotas or portions from the oil revenues, while the population was not very large, reached a critical mass level. The crumbs from such revenues (where most of this income was stolen or sent outside of the country) allowed us to avoid the total collapse of the health system. Despite being bigger every year, the infrastructure of the system could not hold up against the corruption.

In such a fast-growing population as ours, this was the prelude to a total disaster. At first, people thought this was not important; money and work were enough. The major concern of the people was finding a place to live (buying a plot and building a house with their own effort was something that people did not do, except for some eccentric persons that earned the respect and admiration of their neighborhood). If the government built the house and you ended up paying an insignificant quota, much better. Usually, in 4 or 5 years the inflation would eat that debt, like it happened with our mortgage. Anyway, this was more or less the general status quo in the middle 80s.

But the health system had already to feel the stress of the desperate migration mostly from Colombia, Ecuador, even Peru and Chile. Go figure. The corruption was so high that equipment and supplies were stolen by the doctors, and destined for their private hospitals. This is absolutely true. Never punished, this scheme went on for decades.

You had to bring your own supplies to the hospital.
Now, in the middle 90s, things were nasty enough. In the Central Hospital, one of the biggest and most prestigious hospitals in the country, the general situation of scarcity was starting to be felt. Usually, the patients had to take their own supplies and medication because there were not enough for everybody. If they could buy their supplies, the employees, nurses, and doctors could attend them for free. The few supplies they received from the government was just for the really poor who would die or face permanent damage if not properly attended.

One time, I lost an encounter with a bee. Its poison made my ears, face, and hands get swollen. It was more or less funny (for my college friends) until I told them I had problems swallowing. So they decided to take me to the hospital. It was nearby, so in 4 minutes walking, we arrive at the gate. I never could see myself in a mirror but I don´t forget the face of the people and the gatekeeper when they looked at me. Once inside, we had to wait for a doctor. A chubby resident attended me in a hallway (there was no office available, much less a bed) and gave me a recipe. The antidote was inexpensive, and the kind pharmacist gave me the shot without charge. I went home and after a couple of hours, I was fine.

If this would happen to me now, perhaps I would not be writing this. People have died because of much less harmful diseases. A few years ago, before the crisis, I went in a motorcycle ride with some good fellows. We went to a tourist town about a couple of hours from my city. Ate strawberries with whipped cream (yes, strawberries grown up in the middle of the tropics, could you believe it?) and another bee decided that I was not friendly. After half an hour, there I was again this time in a small town infirmary. One of the riding bros was a doctor, so he joked with the nurse that if something happened to me he just would take my bike after signing the death certificate. We Venezuelans have an indestructible sense of humor sometimes.

Once my ear channel got unswollen and I was able to hear again, we hit the road and came back home. The next day, I bought two hydro-cortisone vials. One for me, and one for my kid, just in case. The probabilities of him being allergic too were way too big. When they were almost expired, we donate them to a public nearby infirmary in our location where we trusted the doctor in charge.

You have to be ready to take care of yourself.
This extremely long preamble is just to enhance this fact: anything can happen at any moment, and if you are not decently prepared you could suffer some degree of damage.

I used to travel for years with a little plastic box, with everything needed to inject myself the hydro-cortisone, given the case. I know we could be able to locate someone able to give a shot to my kid, but the probabilities of getting a bee inside the car, with the air conditioning (weather is way to hot and we usually use it all the time) on and the windows closed, were almost zero. Almost.

But I took the medicine with us wherever we went. I know this allergy can kill me or give us a hard time with the younger kid. Older son is tough as an old crocodile.

Given the general status of the health system, one of the flags that used Uncle Hugo was this, to bring voters to his side. Once he could sit on the chair, he started to use the vast resources of the country to try to improve the infrastructure.

I have to be fair on this. Yes, there were some things that improved a lot. Compared to the disaster of a white elephant of our former public health system, many people could enjoy for the first time in their lives a decent medical attention (of course, that was the disguise for the Castro Bros getting inside my homeland his Cuban spies: doctors and nurses…all of them with military training, and well brainwashed).

Kids with heavy facial deformation were able to get reconstructive surgery. Grannies and grandpas with eye problems got surgery too. Working in a state company, but with huge benefits like access to the private health system with a full coverage insurance, we were pretty much protected. Working in the oil fields we needed to know that our families were going to be OK.

There has been a lot of rhetoric around the public system recently. It’s completely ineffective now, as the policies just remain in the air. The resources used came from the oil revenue. Instead of using that revenue and dumping it in the dark, bottomless pit that is the Venezuelan system of public health management, if just a portion, say one third of that income would have remained in a safe place, perhaps overseas, to generate passive income to hold some minimum expenses, and funding yearly that hedge, the health system could have been able to survive and provide some welfare for the children. But the currency control exchange was total and imposed with an iron fist.

Back then, with the incredible amount of money incoming, no one saw any need to use it as a mean for securing a much smaller, but much safer income. That would have allowed a continuous stream of resources that, under an adequate management, would be enough for providing oxygen to a health infrastructure that day to day faces an increasing population.

A chronic problem with the Venezuelan economy has been the lack of decent salaries. This is a very old problem. The health professionals stopped being well paid many years ago in the public sector. But the demand in the private sector was very very high, and this compensated the low salaries offered by the government. With the chronic scarcity taking its place in the medicines and supplies, the population increasing took to ridiculous levels the bedding availability in the hospitals. Traditionally, the assistance to people in regions far away the big cities was deficient.

It was frequent to see people in small towns and villages trying to collect money to send a mother with her sick child or children to one of the big cities so she could take them to a big hospital.

And now everyone is suffering.
Is there any need to explain how poor people, MY poor people, are doing now? I don´t think it is necessary. The outrage I feel while typing this is something that can´t be healthy at all. A much wise writer than me wrote: “…once you have a child, you become the father of all the children in the world”. This was José Martí. And he was right.