$2 billion just went POOF, from one second to the next.

This is just too funny. Longfin [LFIN], my favorite “blockchain company” and hero among scam stocks that I have lambasted since December, is at it again. But this time, it’s likely the last time.

On April 2, I published a piece titled, “What Kind of Hyper-Enthusiastic Market is this that Blindly Keeps Pursuing Scams to Make a Fortune Overnight, even if They Already Crashed the First Time?” It was all about Longfin, which went public on the Nasdaq last December, though it has nothing in the US, and whose CEO lives in Singapore.

On Friday, April 6, at 10:30 a.m., the Nasdaq halted trading in LFIN after shares had tripled in three days, reaching a market cap of $2.1 billion. The tripling occurred after shares had crashed 89% in the prior seven trading days.

Minutes after the trading halt, the SEC announced that it had “obtained a court order freezing more than $27 million in trading proceeds from allegedly illegal distributions and sales of restricted shares of Longfin Corp. stock involving the company, its CEO, and three other affiliated individuals.”

Take a look at the chart, depicting the last two weeks, including the 89% seven-day plunge and the 250% three-day surge, with the trading halt Friday morning. In terms of dollars, shares went from $73 to $8 in seven days, and then from $8 to $28.19 in three days, when trading was halted: 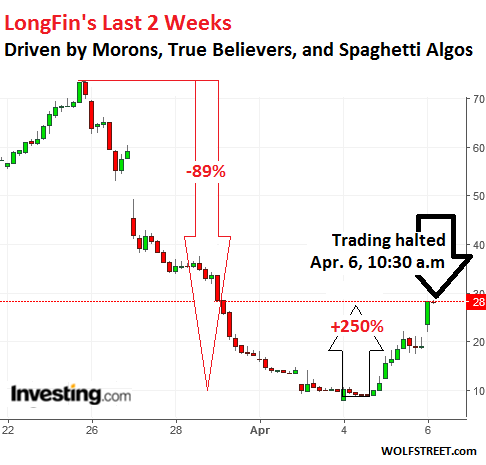 The chart below shows the short and glamorous life of the stock from its IPO in December until its trading halt on Friday: 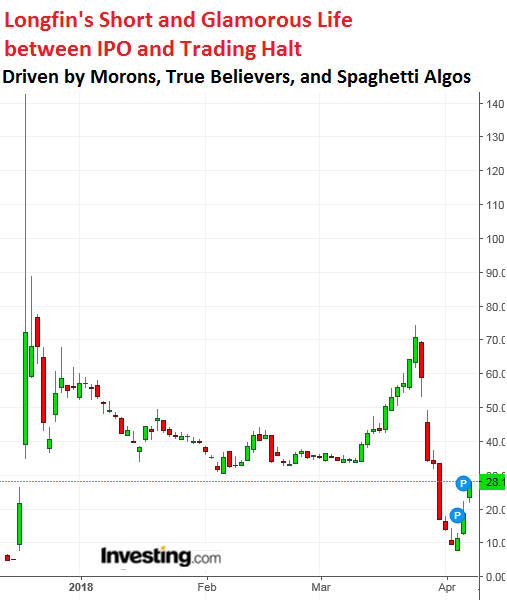 The blue circles with “P” inscribed in the chart appeared on April 4 and April 5. When you hover over them on the Investing.com website, a box pops up with some technical analysis: “Bullish reversal. Reliability: High,” just before the dream went POOF at 10:30 a.m. on April 6. Here’s the April 5 box:

And the SEC on Friday went on in its calmly brutal manner:

According to a complaint unsealed today in federal court in Manhattan, shortly after Longfin began trading on NASDAQ and announced the acquisition of a purported cryptocurrency business, its stock price rose dramatically and its market capitalization exceeded $3 billion.

The SEC alleges that Amro Izzelden “Andy” Altahawi, Dorababu Penumarthi, and Suresh Tammineedi then illegally sold large blocks of their restricted Longfin shares to the public while the stock price was highly elevated. Through their sales, Altahawi, Penumarthi, and Tammineedi collectively reaped more than $27 million in profits.

According to the SEC’s complaint, Longfin’s founding CEO and controlling shareholder, Venkata Meenavalli, caused the company to issue more than two million unregistered, restricted shares to Altahawi, who was the corporate secretary and a director of Longfin, and tens of thousands of restricted shares to two other affiliated individuals, Penumarthi and Tammineedi, who were allegedly acting as nominees for Meenavalli. The subsequent sales of those restricted shares violated federal securities laws that restrict trading in unregistered shares distributed to company affiliates.

“We acted quickly to prevent more than $27 million in alleged illicit trading profits from being transferred out of the country,” said Robert Cohen, Chief of the SEC Enforcement Division’s Cyber Unit. “Preventing defendants from transferring this money offshore will ensure that these funds remain available as the case continues.”

The SEC’s complaint, which was filed under seal on April 4, charges Longfin, Meenavalli, Altahawi, Penumarthi, and Tammineedi with violating Section 5 of the Securities Act of 1933. The complaint seeks injunctive relief, disgorgement of ill-gotten gains, and penalties, among other relief.