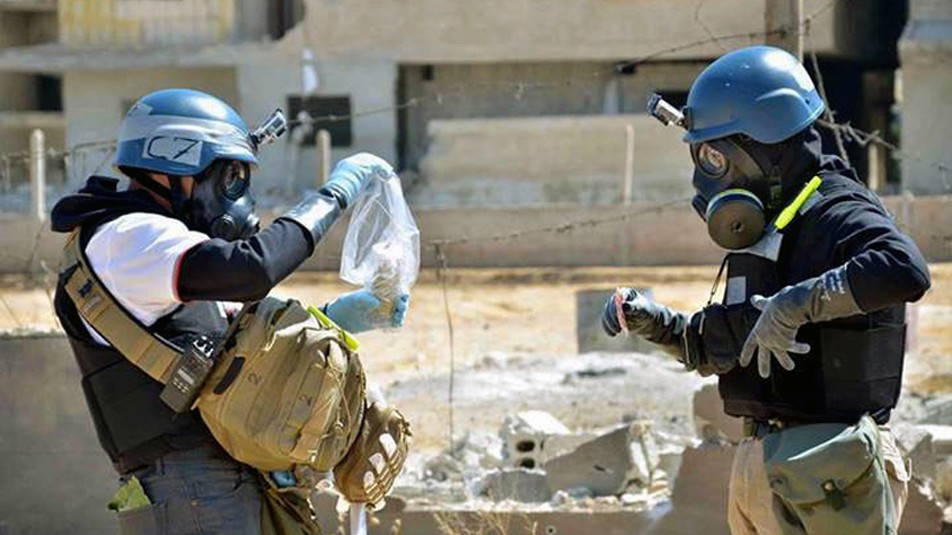 Late Saturday night, the mainstream media began spreading the news of an alleged chemical weapons attack in Douma, Syria. It was reported that the tragic attack has claimed the lives of some 70 innocent civilians. Immediately after the unconfirmed reports, President Donald Trump began threatening Russia, Iran and “Animal Assad,” and blamed them for the attack.

The report of the alleged attack is unconfirmed and reported only by the known ISIS sympathizers, the White Helmets.

There has been no independent verification of the chemical attack and it is only being reported by a group who was caught multiple times staging fake attacks.

“Seventy people suffocated to death and hundreds are still suffocating,” said Raed al-Saleh, head of the White Helmets. This was their second tweet as the first one—now deleted—which claimed 150 people were killed, was apparently too big of an exaggeration to be believable.

Indeed, less than a month ago, the Russian military predicted this exact scenario. As CNBC reported last month, the threat, by Chief of Russia’s General Staff Valery Gerasimov, was widely reported by Russia media sites such as state news agency RIA and Tass. It said Gerasimov said Russia had “reliable information” about militants preparing to falsify a government chemical attack against civilians.

In spite of the fact that Syria and Russia are decrying the allegations as false, referring to them as a “fabrication,” the US has begun the pretext to provoking more war in Syria and potentially Russia and Iran.

The US state department said Russia – with its “unwavering support” for Syria’s government – “ultimately bears responsibility” for the alleged attacks.

There has been zero investigation, and the US government is already pointing fingers and implicating a world power in a massive war crime. Irresponsible indeed.

However, it was entirely predictable as these alleged gas attacks all follow a similar scheme.

For those who don’t remember, below is a timeline showing how conveniently timed this gas attacks are for the military-industrial complex.

On March 30, 2017, Reuters reported that Syria was no longer a US priority and that the government is no longer focused on “getting Assad out.” Conveniently, only 5 days after trying to de-escalate the situation, an alleged gas attack takes place to which Trump responds with 59 Tomahawk missiles.

Three days after the missile attack, the US ambassador to the United Nations, Nikki Haley, issued a statement that regime change in Syria is inevitable.

As TFTP reported at the time, a leading weapons academic, and one of the foremost experts in the field, came forward in a series of reports noting his opposition to the official story in regards to the Khan Sheikhoun nerve agent attack in Syria. According to the expert, that Syrian gas attack was staged.

Days later, on April 7, 2018, the White Helmets report that Assad gassed his own people — again — and no one, other than the people known for staging videos, is the source.

On April 8, 2018, Trump then blames Russia, Iran, and Syria and issues “Big price to pay” threats to all of them.

“Many dead, including women and children, in mindless CHEMICAL attack in Syria. Area of atrocity is in lockdown and encircled by Syrian Army, making it completely inaccessible to outside world. President Putin, Russia and Iran are responsible for backing Animal Assad. Big price……to pay. Open area immediately for medical help and verification. Another humanitarian disaster for no reason whatsoever. SICK!” wrote Trump.

No one here is claiming that Assad is some hero, but for him to make this move—knowing the end result—is entirely preposterous and would not happen.

This alleged chemical attack is in spite of the Syrian regime successfully defeating ISIS in over 90 percent of the county. Just as Assad hears that Trump is considering pulling out of the country—which would have been a massive win for the Syrian regime—he gases his own people ensuring the exact opposite of this would happen. Sure thing.

But, we are supposed to believe this. According to the official narrative, every time Syria is on the verge of a military victory in their own country, Assad then randomly gases his own people to thwart this victory and gives the US a reason to invade and turn what’s left of Syrian infrastructure into rubble.