If you’ve read my work over the past several weeks, you’ve probably noticed an increased fascination with secession/independence movements around the world. I think we’re at the very early stages of this developing trend, which will see nation-states across the world fracture for a variety of reasons. The historical significance of the political changes we’re about to live through cannot be overstated. As I wrote in last month’s piece, The Future Will Be Decentralized:

To conclude, I recognize that I’m making a huge call here. I think the way human beings organize their affairs will experience the most significant paradigm level shift we’ve seen in the Western world since the end of the European feudal system hundreds of years ago. That’s how significant I think this shift will be. There are two key things that need to happen for this to occur. The first is technological innovation, and that’s already happening. The second is increased human consciousness. As Thoreau noted, in order for us to have greater self-determination we need to be ready for it. Are we ready? I think we’re getting there.

While extremely significant, the Catalan independence movement is just the tip of the iceberg when it comes to a global drive toward political decentralization. For example, just today I came across another potential secessionist hotspot in an unexpected place, Brazil.

Inspired by the separatist vote in Catalonia, secessionists in three wealthy southern Brazilian states are redoubling their efforts to break away from the crisis-battered nation.

Residents of Rio Grande do Sul, Santa Catarina and Parana states are being called to vote in an informal plebiscite on Oct. 7 on whether they want independence. Organizers are also urging residents of the three states to sign a legislative proposal for each of their regional assemblies that would call for a formal, binding referendum. The non-profit group “The South is My Country” aims to mobilize a million voters in 900 out of the region’s 1,191 cities.

Cooler, whiter and richer than the rest of Brazil, these southern states have long nursed separatist ambitions. Rio Grande do Sul even briefly claimed independence 180 years ago. Few Brazilians expect the current movement to succeed any time soon, not least because it is prohibited by the Constitution. But the country’s deepest recession on record and a massive corruption scandal have exacerbated the region’s longstanding resentment towards the federal government in Brasilia. With just one year to go until general elections, the rekindling of separatist sentiment in the south is another indicator of the unsettled state of Brazilian politics.

Celso Deucher, the leader of The South is My Country, says the region contributes four times as much tax as it receives and suffers from a below-average level of political representation. He argues that such an unjust situation outweighs any legal concerns.

“Whenever the subject of separatism comes up, they ban it because the federal Constitution does not allow it,” he said. “But the law is not immutable.”

Rio Grande do Sul is currently immersed in a financial crisis and has lost much of its economic clout, according to Fernando Schuler, a professor of political science at Insper University in Sao Paulo.

“There’s a huge cultural detachment between the Tropicalia Brazil and the South,” he said. “The reasons for separation are solid, justifiable, but I don’t think they are viable.”

There are two aspects of the above story I’d like to address. First, is that, like Catalonia, the regions thinking about secession from Brazil are relatively wealthy. This is not insignificant and certainly worth thinking about when it comes to wondering what sorts of responsibility these regions should have to the former union should a peaceful breakup go forward. It’s also worth remembering that the leaders of the American revolution were also extremely wealthy. An Independence movement driven by wealthy factions doesn’t necessarily preclude the creation of a superior governing structure.

The second point relates to the fact that Brazil, like Spain, apparently provides no “exit option” for any province or region which decides it no longer wishes to be part of the nation-state. As such, this is by definition an oppressive and involuntary political relationship completely inappropriate to conscious human beings. As I explained in Monday’s post, all political associations should be voluntary and it’s absurd that people are simply born into nation-states that are assumed to be forever entities with no escape latch.

Nation-states aren’t eternal, nor should they be. The problem with nation-states is they refuse to accept this fundamental reality. As such, political dealings with the state get transformed into oppressive centralized relationships, as opposed to voluntary decentralized arrangements. It’s no surprise then that oppressive relationships work out less positively for the average person than voluntary ones where the citizen and local communities are sovereign and empowered.

In response to the Spanish King’s extraordinarily thuggish comments regarding Catalonia yesterday, I composed several tweets relevant to today’s discussion. 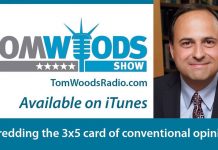