By August, Bitcoin had more than quadrupled in value to reach over $4,000.

We’ve been asked this question many times from both subscribers and gold industry insiders.

Regular Katusa Research readers are familiar with the allure of owning gold and its long history as money. People have used gold for thousands of years because it is portable, durable, anonymous, divisible, convenient, and consistent around the world. And most importantly to many people, gold cannot be debased by governments like paper money can be.

To fans of cryptocurrencies, those are familiar words. They own cryptos for many of the same reasons. They love the idea of owning money that isn’t controlled by a government.

Will Bitcoin supplant gold in the hearts and minds of those who value privacy, sound money, and liberty?

First off, let’s look at how much total dollar value has been traded in gold compared to the cryptocurrency sector. Below is a chart which shows the last 30 days total value traded in U.S. dollars, the big gold ETF (symbol, GLD), the combined cryptocurrency market, and the total gold futures market.

We can infer a few things from this chart. First off, the gold futures market is primarily traded by large gold companies, professional traders, and institutional money managers. The group traded over $1.3 trillion worth of gold over the past 30 days. This means that the largest funds and traders still favor gold over cryptocurrencies. But that makes sense because mandates at most major funds don’t allow them to buy cryptos. This will start to change. Many funds that aren’t buying and selling cryptos will do so in the future.

The average retail investor doesn’t have access to or the capital for the gold futures market. This guy will often buy the gold ETF to gain exposure to gold. However, a good portion of those potential gold ETF buyers are buying cryptocurrencies now. The cryptocurrency market has traded over 350{5f621241b214ad2ec6cd4f506191303eb2f57539ef282de243c880c2b328a528} more on a total dollars traded basis than the largest gold ETF, GLD. The cryptocurrencies trade 24 hours a day, 7 days a week. Money never sleeps in the crypto world. Their exchanges are never closed. The gold futures market trades 24 hours a day for 5.5 days a week. The gold ETF has the fewest trading hours. The market for the ETF is only open 6.5 hours a day, 5 days a week. 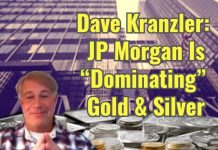