‘Black Lives Matter’ leader Deray McKesson was left embarrased after he claimed that a toy manufacturer and Hollywood in general were depicting black people as apes, only to later delete the tweet when his attempt at race baiting was hilariously exposed.

McKesson tweeted, “Given the history of rendering black people as apes, I’m offended and appalled by the lack of consciousness in Hollywood. #PlanetOfTheApes,” alongside an image of the cover of the new blockbuster War for the Planet of the Apes and a toy figurine of a “bad ape” wearing a blue vest.

The tweets were obviously meant to suggest that the makers of the movie had somehow modelled the “bad ape” on DeRay because he wears a distinctive blue vest jacket virtually every time he is seen in public or does any kind of media appearance.

However, DeRay quickly deleted the tweet after he was barraged with messages from people reminding him that the “bad ape” in the blue jacket is a character from the original 1968 Planet of the Apes movie starring Charlton Heston.

Democrats and Their Policies Are Abetting America’s Violent Crime Wave 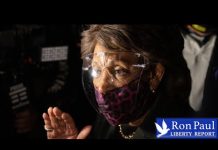