Tag: Who Killed President Kennedy And Why?

If Not Oswald, Who Killed President Kennedy and Why? 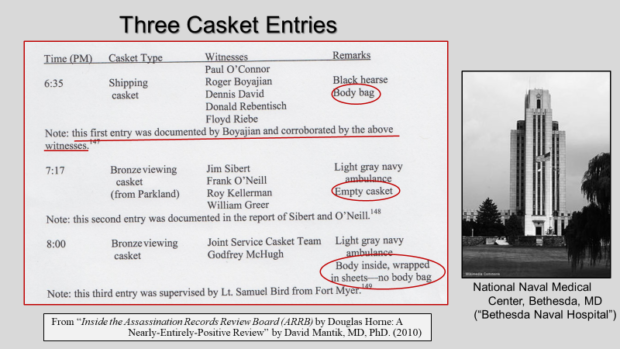 I was 23 years old when President Kennedy was killed. Now, 55 years later I am most likely the only person still alive who personally knew the two physicians who figure most importantly in the case, Admiral George Burkley, Kennedy’s physician, and Dr. Malcolm Perry, the surgeon who performed a tracheotomy on him after he was shot.

When I was a teenager my father and our family and Dr. Burkley and his family shared a duplex at the Newport Naval Hospital in Newport, Rhode Island, where then Capt. George Burkley, M.D. was Chief of Medicine and my father, Capt. Donald Miller, M.D. was Chief of Surgery. I remember Dr. Burkley as a pleasant man, a straight arrow Naval officer like my father.

END_OF_DOCUMENT_TOKEN_TO_BE_REPLACED

Who Killed President Kennedy And Why?

In late October President Trump ordered that “the veil be lifted” from the investigation into the assassination of President John F. Kennedy in 1963. More than 3,000 new, previously classified FBI, CIA, and Congressional documents were released to the public. A quick overview of the material shows that the bulk of it pertains either to the CIA’s covert operations against Cuba (one of the most popular theories about JFK’s assassination focuses on the ties between Lee Harvey Oswald and anti-Castro paramilitary groups that were upset about Kennedy’s “soft” policy toward the island) or the CIA’s search for a “Soviet fingerprint” in the crime – as can be seen in Langley’s fruitless but determined attempts to turn the defector Yuri Nosenko into a key source of information (although, truth be told, he adamantly refused to give the required “testimony” and was for this reason long suspected of being a KGB double agent). We cannot avoid the impression that these huge document dumps – along with the scores of “investigations” conducted over the last 54 years, in addition to the books and movies about this cryptic murder – have one goal: to keep whoever really ordered the JFK assassination from being brought to justice.

All of these materials focus in one way or another on the figure of the unhappy “psychopath,” known as Lee Harvey Oswald, the lone gunman who shot the 35th US president on Nov. 22, 1963, from the sixth floor of the Texas School Book Depository in Dallas, using a 6.5mm Mannlicher-Carcano Italian rifle with telescopic sight. Each new batch of released documents (and there have been three just this year: on July 24, Oct. 26, and Nov. 3) triggers another round of furious debate, all over the world, about his motives, connections, and the facts of the crime.

The narrative of the murder would seem quite straightforward. Just a few minutes after the fatal shots were fired, the security services were already combing through the depository building. On the 6th floor, they discovered an open window, three shell casings, and a rifle bearing Oswald’s fingerprints. Forty minutes after Kennedy’s death, the cops already had a name, physical description, and address for his alleged killer. The crime of the century was easily solved. The police surrounded the Texas Theatre building where Mr. Oswald was hiding, and he was arrested barely an hour after the president was assassinated.

But not everything was quite so simple. A 26-second movie, made that day by Abraham Zapruder, shows the exact moment of the murder, which has made it possible to dissect the instant of Kennedy’s death, frame by frame.

According to the official story, three shots were fired (the first missed, the second passed through the president’s neck and ricocheted into the chest, wrist, and thigh of Texas Governor John Connally, and the third bullet struck Kennedy in the head). But the film clearly shows that the second bullet (frame 225) and third bullet (frame 313) are of completely different types: the second passed through the president’s neck without serious tissue damage, while the third was obviously an expanding bullet, the impact of which shattered the American leader’s skull! A mix of different types of bullets within a single clip of a semi-automatic gun would be a game-changer for shooters. But the most likely explanation is that there were at least two snipers involved.

A number of recognized probe inconsistencies (missing bullets, improper autopsy procedure, faked autopsy photos & notes, to point out a few) that led to repeated official and inofficial attempts to reconsider the case for the past decades, eventually resulted in the fact that today only 24{5f621241b214ad2ec6cd4f506191303eb2f57539ef282de243c880c2b328a528} of Americans believe that LHO had acted alone.