Meet Artem Sytnyk, Director of the National Anti-Corruption Bureau of Ukraine, and Hear the Audio of Him Clearly Admitting That Ukraine Colluded with HILLARY, NOT TRUMP

Did Democrats really think that playing the Ukraine card would do them any good at all?

More and more information is coming out that the Democrats were the ones trying to use Ukraine connections to their advantage and the latest revelation is huge.

A Ukrainian official has admitted that he was working for Team Hillary in 2016 and not Team Trump.

END_OF_DOCUMENT_TOKEN_TO_BE_REPLACED

The Democrats, Not Trump, Are the Racists It doesn’t take Nostradamus, or even a Coney Island fortune teller, to predict the coming Democratic presidential debates will be filled to overflowing with accusations of racism toward Donald Trump.

Not only that, the candidates will certainly be doing their bests, directly or by innuendo, to tarnish each other with the same ugly brush in an almost always fallacious manner. But when it comes to the real, down-home, George-Wallace-Segregation-Now-Segregation-Forever racial bigotry, it will be Donald Trump by a landslide. To them, POTUS is the big, bad, racist wolf.

END_OF_DOCUMENT_TOKEN_TO_BE_REPLACED

Barr: “Resisting A Democratically Elected President” Is Destroying Our Norms And Institutions, Not Trump 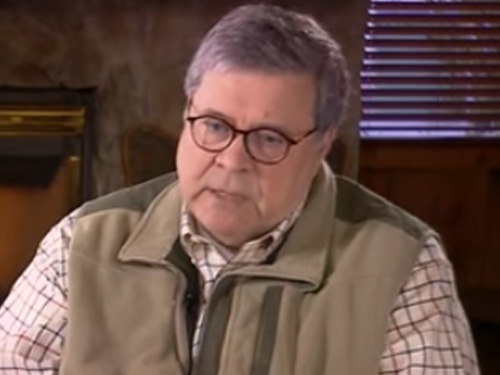 In an interview aired Friday on “CBS This Morning,” Attorney General William Barr explains why he opened an investigation into the origins of the Russia investigation. He doesn’t say what the evidence is, but Barr tells CBS News legal correspondent Jan Crawford that there is evidence that makes him believe senior government officials may have acted improperly to authorize surveillance of President Trump’s 2016 campaign. He says that led to “spying” on the campaign.

END_OF_DOCUMENT_TOKEN_TO_BE_REPLACED

Clinton/Obama Were Colluding With The Russians, Not Trump

While the media, the Democrats and many Republicans have been losing their minds, spending our money and wasting time on investigating something they have no evidence for investigating, namely the Trump administration colluding with the Russians, the real colluders were Barack Hussein Obama Soetoro Sobarkah and Bill and Hillary Clinton.

It isn’t like we haven’t pointed out some of this collusion before here, but C. Mitchell Shaw reports at The New American:

Newly released information confirms that it is Hillary Clinton — as secretary of state — and not Trump who can be shown to be “Putin’s puppet. The Hill, Fox News, Newsweek, and others are reporting that a deal between Clinton’s State Department and Russian interests that transferred 20 percent of U.S. uranium to Russian control involved bribery, collusion, and coverup. And Clinton’s fingerprints are all over it.

This confirms reports published by The New American even as the failed Clinton campaign and its accomplices in the liberal mainstream media continued to beat the stillborn horse of Trump/Russia collusion. In an article originally published in our print magazine and later published online, this writer addressed the evidence of “unethical, illegal, and corrupt behavior” revealed in the leaked Clinton campaign and DNC e-mails and documents published by WikiLeaks:

Those e-mails and documents serve as a box full of smoking guns against the DNC and Clinton campaign. A quick look at just a few of those

smoking guns — any of which alone would be damning — illustrates why Clinton (with the help of the liberal media) wanted to keep the attention on the supposed source of the leak, rather than on what the e-mails show about Clinton and her comrades in the DNC….

As secretary of state, Clinton “reset” relations with Putin’s Russia, which helped the Clinton Foundation and its donors make millions of dollars off a deal that sold the mining company Uranium One (and 25 percent of our strategic uranium production) to Russia.

That report by The New American — in February — was published months before The Hill “broke” this story.

Now, more is known about that deal. And the more that comes out, the worse it looks for both Clinton and Obama: FBI and court documents show that the Obama-era FBI (under the “leadership” of ousted FBI Director James Comey) was aware that Putin’s regime in Moscow had compromised an American uranium trucking firm with bribes and kickbacks in violation of the Foreign Corrupt Practices Act, according to a report by The Hill. As an aside, does anyone still think it was a mistake for Trump to fire Comey?

The evidence of bribes and kickbacks is not mere conjecture and innuendo (as in the case of allegations against Trump), but is solidly supported by “a confidential U.S. witness working inside the Russian nuclear industry” who gathered “extensive financial records,” made “secret recordings,” and intercepted “emails as early as 2009,” according to The Hill. Moreover:

They also obtained an eyewitness account — backed by documents — indicating Russian nuclear officials had routed millions of dollars to the U.S. designed to benefit former President Bill Clinton’s charitable foundation during the time Secretary of State Hillary Clinton served on a government body that provided a favorable decision to Moscow, sources told The Hill.

The racketeering scheme was conducted “with the consent of higher level officials” in Russia who “shared the proceeds” from the kickbacks, one agent declared in an affidavit years later.

And yet — even with the FBI and other federal authorities being aware of this in 2009, the DOJ dragged the investigation out until 2015, allowing a deal to go through that transferred between 20 and 25 percent of U.S. uranium to Russia in the Uranium One deal that fattened the coffers of the Clinton Foundation, strengthened Putin’s Russia, and weakened the United States. For the anti-American element (for whom Clinton was the perfect candidate), that is a win/win/win scenario.

In a secret tarmac meeting, Hillary Clinton told the FBI’s Robert Meuller to deliver uranium to the Russians.

“Over two years ago Russia requested a ten-gram sample of highly enriched uranium (HEU) seized in early 2006 in Georgia during a nuclear smuggling sting operation involving one Russian national and several Georgian accomplices. The seized HEU was transferred to U.S. custody and is being held at a secure DOE facility.”

The secret “action request,” dated Aug. 17, 2009, was sent out by Secretary of State Clinton and was addressed to the United States Ambassador to Georgia Embassy Tbilisi, the Russian Embassy, and Ambassador John Beyrle.