Official gold reserve updates from the Russian and Chinese central banks are probably one of the more closely watched metrics in the gold world. After the US, Germany, Italy and France, the sovereign gold holdings of China and Russia are the world’s 5th and 6th largest. And with the gold reserves ‘official figures’ of the US, Germany, Italy and France being essentially static, the only numbers worth watching are those of China and Russia.

The Russian Federation’s central bank, the Bank of Russia, releases data on its official gold holdings in the Bank’s monthly “International Reserves and Foreign Currency Liquidity” report which is published towards the end of the third week of each month, and which confirms gold reserve changes as of the previous month-end.

The Chinese State releases data on its official gold holdings via a monthly “Official Reserve Assets” report published by the State Administration of Foreign Reserves (SAFE) that is uploaded within the Forex Reserves pages of the SAFE website. This gold is classified as held by the Chinese central bank, the People’s Bank of China (PBoC). The SAFE report is published during the 2nd week of each month, reporting on the previous month-end.

In both reports, official gold reserves (i.e. monetary gold) are specified in both US Dollars and fine troy ounces. Monetary gold is gold that is held by a central bank or other monetary authority as a reserve asset on a central bank’s balance sheet.

While its possible and probable that the Chinese State / PBoC really holds more gold than it claims to hold, any upcoming scenario in which the Bank of Russia surpasses the People’s Bank of China in terms of gold holdings would at least be symbolic in terms of international monetary developments, and would be sure to generate some chatter in the financial press.

Although the official gold reserves of these two key nations are now nearly neck and neck, there are still some interesting contrasts between them, not least the way in which the Bank of Russia’s reported gold holdings have been steadily increasing month on month, while the reported gold holdings of the People’s Bank of China have remained totally unchanged for nearly a year now, since the end of October 2016.

The routes via which these two strategically important nations have amassed their official gold reserves are also quite different, at least at a public reporting level. 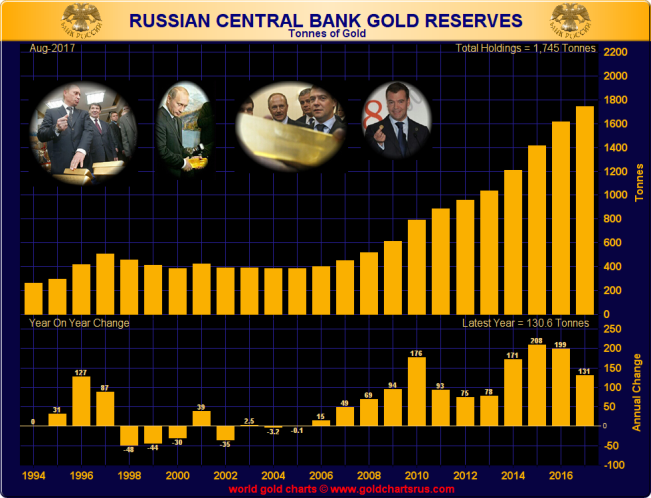 It wasn’t so long ago (2007) that the gold reserves of the Russian Federation were still in the region of 400 tonnes. However, beginning in about the third quarter of 2007, the Bank of Russia began a concerted campaign to rapidly expand its official gold holdings, a trend which never subsided and which has been ongoing now for exactly 10 years. By early 2011, official Russian gold reserves had exceeded 800 tonnes. By the end of 2014, the Bank of Russia was reporting holding more than 1200 tonnes of gold. And by the end of 2016, Russian official gold were more than 1600 tonnes. For full details on the Bank of Russia’s gold holdings, including gold storage, gold reserve management, gold purchases and Russian government views on gold, see “Bank of Russia, Central Bank Gold Policies” at BullionStar’s Gold University.

The route to the Chinese State accumulating 1842 tonnes of gold is a different one to that of the Russians, again at least from a publicly reported angle. While the Bank of Russia has historically published changes to its gold reserves on a monthly basis, the Chinese central bank has chosen to remain very secretive, and between 2001 and mid 2015 had only issued four public updates addressing the size and growth of its gold reserves. These 4 updates were as follows: