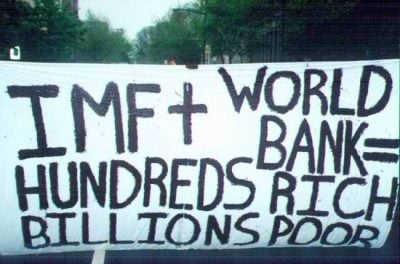 As key representatives of the three chief villains of international finance and trade, the IMF, World Bank (WB) and the World Trade Organization (WTO) met on the lush resort island of Bali, Indonesia, they warned the world of dire consequences in terms of reduced international investments and decline of economic growth as a result of the ever-widening trade wars initiated and instigated by the Trump Administration. They criticized protectionism that might draw countries into decline of prosperity. The IMF cuts its global economic growth forecast for the current year and for 2019.

This is pure scaremongering based on nothing. In fact, economic growth of the past that claimed of having emanated from increased trade and investments has served a small minority and driven a widening wedge between rich and poor of both developing and industrialized countries. It’s interesting, how nobody ever talks about the internal distribution of GDP growth that these handlers and instruments of empire and liars for the elite are boasting about; nobody ever seems to question the way these growth rates are calculated – or perhaps just drawn out of hot air? Take the case of Peru, a resource-rich country that boasted in the past often an economic growth of 5% to 7%. On average, the distribution of this growth was such that 80% went to 5% of the population and 20% was to be distributed among 95% of the people. This doesn’t even address the fragmentation of the lower and higher tiers of the percentage breakdowns, but it surely creates more poverty, more inequality, more unemployment and more delinquency.