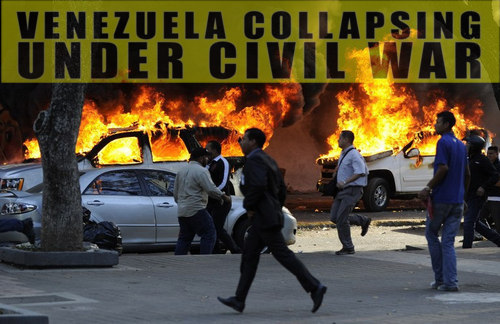 The late June story over at the Washington Post warned us why Venezuela may be rushing headfirst into a civil war after a surreal and movie-like scene had unfolded for Venezuelans and the world to see: A police helicopter circling the capital of Venezuela carrying a banner that read ‘Libertad’, or ‘freedom’.

While govt officials of Venezuela confirmed that the chopper dropped several grenades on the Supreme Court building in the city of Caracas, leading President Nicolas Maduro to claim a coup was being attempted, he darkly warned of more violence ahead. As we see in the ghastly new videos at the bottom of this story, his warnings of more violence have exploded across the starving nation with one confrontation after another and bloodshed everywhere. From Maduro.:

“If Venezuela was plunged into chaos and violence and the Bolivarian Revolution destroyed, we would go to combat. We would never give up, and what couldn’t be done with votes, we would do with weapons. We would liberate the fatherland with weapons.”