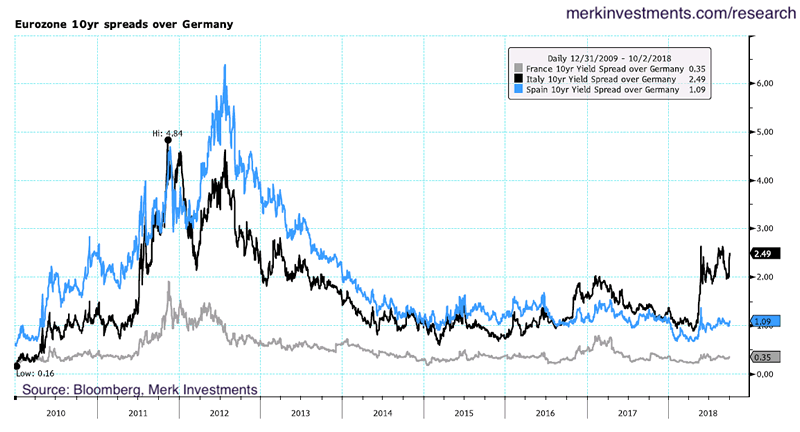 Why is it that Italy causes such a stir in financial markets when proposing a budget? Is it politics or is the stability of the financial system at stake? In our assessment, the best way to avert a crisis is to allow market forces to play out. Let me explain.

We all “know” Italy is in trouble. Well, before we jump to conclusions, let’s look at a few charts. Above is the Italian unemployment rate; it’s come off a high level, but still elevated. When policy makers call for structural reform, it is a codeword for increasing flexibility in the labor market, i.e. making firing easier. If firing workers is difficult, companies won’t hire workers. It’s also in this context that providing a so-called basic income is criticized by some as providing a disincentive to join the labor force (aside from cementing higher deficits for years to come). Basic income means you get paid, whether you work or not. In practice, the devil is in the details, as European workers have long enjoyed unemployment benefits; streamlining such benefits might actually save the government money. That said, Germany’s low unemployment, to a significant extent, may be due to the fact that welfare benefits were curtailed in 2002 (with a social democrat as chancellor), providing an incentive for workers to join the workforce.